Live from Buenos Aires: David Wondrich on Drink History in the Americas

Hello from Tales of the Cocktail on Tour in Buenos Aires! I am attending three seminars today held at the lovely Intercontinental Hotel. (Then the rest of the time I'll just be in bars.) 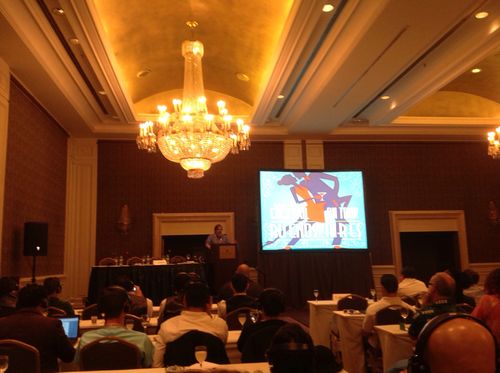 Below are notes I took in the seminar, mostly unedited, but let me know if these raise any questions and I'll try to answer them.

When Columbus arrived some South American and North American peoples had localized fermented beverages but not really any trade or exchange in them.

When the Spanish came, they tried to recreate Spain in the Americas. Havana, Cartagena, Santiago, Chile, etc. So they planted wine grapes which in some places succeeded. Then distillation. The Spanish weren't big spirits drinkers as much as Northern Europeans. So in the Americas it became important because distilled spirits travelled better than wine.

But the Spanish government in Spain tried to discourage practice of local distillation of grapes as it didn't profit them.

In the Caribbean, sugar cane grew very well. Wiped out existing land and economy, imported slavery. English islands were particularly brutal. English weren't interested in building new England - it was more like strip mining the local land to bring it back to England.

Making sugar produced a lot of industrial waste- molasses. But they realized it could be made into (bad) rum that is basically free; made from free raw materials. By the middle of the 1600s the rum industry was growing. Went up and down coast of the Americas; becomes the national drink of the North Americas and the Caribbean.

The English "weren't water drinkers" - drank beer and spirits. But beer didn't work in the Americas so well - hard to make and took up lots of space. When travelers come to America, they notice that everyone is drunk. Because wine doesn't work except for in a few places, not much beer outside of Massachusetts and Philadelphia, but for the most part it was spirits.

Around 1610 English sailors got 1 gallon of (beer gallons = 5 liters) beer per day, which was 8-10 pints per day. But now boats are full of beer - takes up lots of storage. This worked in Northern Climates but not when going to hotter ones where beer would spoil.

First mention of cutting heads of spirits comes in 1700s., so spirits at this point were gross and needed mixing with other ingredients to make them palatable.

1610s, some crafty sailor decided to turn spirits back into wine, since beer was all spoiled. So someone restored acidity of wine with lemons or lime juice (citrus from coasts of Africa); then to cut the sourness/bite they added sugar. Sugar doesn't spoil so they can carry it on ships. Then they add water to reduce it more toward wine proof, then add spices. Now you have Punch.

Supposedly origins of the name comes from the Indian word ''paunch" for "five" (ingredients) but Wondrich doesn't believe it. Indians weren't drinking punch; they were drinking spirits but not punch. Probably comes from English word 'paunch' meaning round and short.

When punch got back to the Caribbean they found it made the rum taste good, which had been problematic before.

Punch spread around the world, particularly England and on the coasts. But in America you can't get very far inland easily. So didn't have access to limes etc.

Inland you had the whisky distillers. Still needed to mix it but didn't have lemons etc. But did have mint. So Juleps started happening. Inland uses whisky. On coast used rum. If you could afford it you used brandy or genever in Juleps.

The birth of the yankee school of drinking was the addition of ice. Frederick Tudor created the ice industry. The Mint Julep was the first iced drink, and it was world famous - people hated America but loved the Julep- thought it was marvelous that such ignorant hicks came up with something great.

Then they invented the cocktails.

Richard Stoughton invented and advertised Stoughton's Stomach Elixir in South London. Advertised it as good for you after a night of drinking, and recommended you to drink it with sweet wine in the morning - so that's bitters, sugar, and alcohol. In England, 'cocktail' was a generic term for something that cocks your tale up. (There was a practice of sticking ginger in a horse's butt before trying to sell it; this would make the horse cock its tail up and prance around, looking healthy.) Any drink in the morning could be called a cocktail, including ginger beer.

In the United States, however, the cocktail became standardized and attached to a spirits and bitters drink very quickly. (In that story from 1803 where cocktails in the US were first mentioned, a guy was also drinking a 'gin bim' which is gin barbados-style. So that's a gin swizzle. )

Cocktails became a thing in the upstate NY area, but the 1820s spread to everywhere in the US, made with most spirits (except rum), brandy, genever, whisky. Initially it was not an iced drink. Julep was an iced drink but not cocktail.

But by 1830s-1840s ice industry had been around a while as had the cocktail. So ice came to more drinks - sherry cobbler. Shake it in a cocktail shaker (just invented).

Then the cocktail became iced and because cocktail was a quickly-consumed drink you wouldn't want ice in it so you'd strain it out. By 1849 the gold miners popularized the way of drinking cocktails with strained (it was initially a luxury) for a cocktail but after this became the standard way of drinking it.

Ice created a need for a whole new set of skills to mix with. So bartending golden age came about. People like Williard pioneered making individual drinks to order, created new iced drinks.

This iced style of American drink became the international style of drink - American bars popped around the world (70 or so years before US Prohibition; not driven entirely by Prohibition). In Paris by 1860 there were 5-6 American bars, also in Argentina, Melbourne, Sydney, London. Sort of the drink of the (pre-)jet-set, the world travelers.

Then drinks became invented locally by local American or American-trained bartenders, such as the Pisco Sour. Other hybrid drinks came about, such as the Cuban cocktails. Late 1898 American bartenders rushed in to open bars, expecting a business rush. They refashioned mixology for the local and tourist audience. They invented the idea of putting lots of citrus, pineapple juice in Cuba.

Around 1900s Bronx cocktail invented. It was the Cosmopolitan of its day. (It contains gin, vermouth, orange juice- a new cocktail ingredient.) It opened the door for Cuban-style drinks to come into the US. Daiquiri showed up after that in US in 1910s. (Introduced the idea of small glass of sour- previously if you wanted a lot of citrus you'd have a punch.)

Before 1920 tequila was a curiosity in North America at best. Prohibition brought tequila drinks into US.Then the Margarita came after.

That's as far as we got- not bad for an hour and a half-hour seminar!