The Geology of Scotland and the book Scotch on the Rocks

In my studies of water in spirits and cocktails, I picked up the book Whisky on the Rocks: Origins of the 'Water of Life' by Stephen and Julie Cribb. The book is about the geography of Scotland and how that influences the water sources for scotch whisky.

It turns out Scotland's geology is pretty varied between very old (2900 million years) and new (60 million years), with large faults that divide the country into different areas, rift valleys, metamorphosed Dalradian rocks, schists, volcanic islands, and more. I don't know what most of those words mean either. 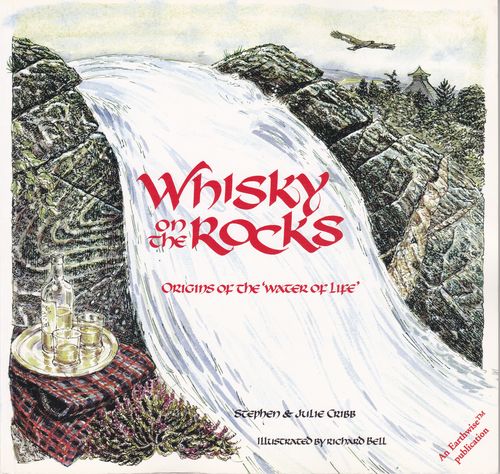 Distilleries in Scotland draw their water from streams, rivers, springs, reservoirs, wells, and other sources. Even within a single distilling city like Dufftown, water comes from several different sources. The water used for scotch whisky seems to be just as varied as the whisky produced there.

One of the most interesting and useful passages in the book (to me), comes from an early page.

The primary source of water is rain, but what happens to rainwater before its arrival at the distillery affects its chemistry and thus the uniqueness of the resulting malt whisky. The rain may end up as a stream or river, in a loch or a reservoir, coming from the rock as deep or shallow boreholes, or as a spring high on a hillside.

If it falls on bare mountains made of crystalline rocks it will flow rapidly downhill as streams. This water has little chance to interact with the underlying rocks and often has a low mineral content. It will be acid and soft.

On the other hand if the strata are more permeable, or have many joints and fractures, the rain will percolate into and through the rock, dissolving it and increasing the water's mineral content. Limestones and sandstones, for example, yield water rich in carbonates or sulphates; such waters will be neutral or slightly alkaline and hard.

'Soft water, through peat, over granite' was the traditional and still oft-quoted view of the best water for distilling. Remarkably, out of the 100 or so single malt whiskies, less than 20 use water that fits this description.

Though the book covers how geography influences the water sources for scotch and the paths it takes to get to the distilleries, it doesn't really get to deep into how that water then influences the distillation and importantly the taste of scotch, noting that it is just one factor along with peat smoke, still shape, and aging that may influence the final product. But of course, that's a big question that I'm researching in my Water Project.

Some facts about water sources for whiskies from the book (keeping in mind it was published in 1998 so it may be out of date):

Those are just a few tidbits from the book, which is only 70 pages but rich with diagrams of the geography of the regions being discussed. It is definitely a geography book rather than a whisky book, and can be a little hard for the novice (me) to parse. That said, I have a feeling that the more I learn about water and its effects on fermentation and distillation, the more I'll refer back to this book.

The Water Project on Alcademics is research into water in spirits and in cocktails, from the streams that feed distilleries to the soda water that dilutes your highball. For all posts in the project, visit the project index page.