Hello again from Tales of the Cocktail live in the Intercontinental Hotel in Buenos Aires! I just attended Beachbum Berry's seminar: Tiki Drinks from A to Zombie, and below are my notes.

Please forgive any spelling errors - I was typing live. 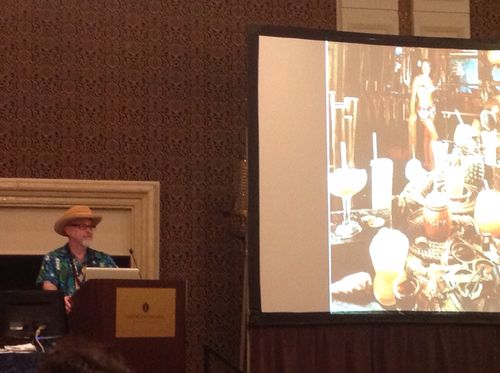 The golden age of tiki was from the end of Prohibition to the beginning of Disco. The 40 year drink trend inspired cultural trends in clothing, design, architecture, and music, rather than those things inspiring cocktails.

Tiki palaces were fine dining restaurants- the most expensive nights out. Big tiki restaurants were often designed by Hollywood art directors, had no windows; they were sets.

In most restaurants, you switch from cocktails to wine, but in Polynesian restaurants you drank rum cocktails all the way through the meal. Desserts were flaming coffee grogs and other drinks. The drinks drove this faux-Polynesian economy.

All these drinks came from one man, the most influential bartender of the 20th century, Don the Beachcomber. He came up with 70 original cocktails in the 1930s. These drinks were stolen by thousands of other bars and were the template for this entire trend. 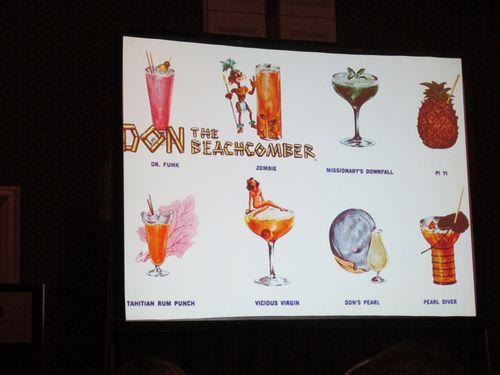 The Doctor Funk cocktail, for example, traveled from Don the Beachcomber to Beverly Hills where it was called the Dr. Fong. Then in San Diego it became with Dr. Won. Then in Florida it became the Dr. Sam Tee.

Don the Beachcomber's father had struck it rich in oil, and gave him a choice of of college or a trip around the world, so he did the latter. He travelled around the world twice as he stretched his dollars far. He learned about drinks around the world because of this. Had drinks like Singapore Sling, rum and coconut in other countries, etc.

Don ended up in Hollywood during Prohibition and became a bootlegger and ran a speakeasy. Some say he got his name from working for the mob as in 'the don'. His friends bankrolled his first bar for him after Prohibition. It was in the corner of a hotel and seated 40 people. It was Don the Beachcomber's.

But rum was now cheap since nobody wanted it. And Don had learned to mix rum drinks in the Caribbean (not the South Pacific), particularly the Planter's Punch he learned to make in Jamaica.

Same with the 'strong' - he used multiple rums- a totally new idea. Rum unlike scotch and gin is more varied: have dark rich molasses heavy rums and light dry floral Cuban rums, plus everything in between, depending on where they came from. Don was one of the only people who had knowledge of all these rums.

Nobody in Hollywood had ever tasted drinks like this. Cornelius Vanderbuilt was one of the first people to have them and told all his friends; Don bought a new building and expanded. It was the hottest hostpot in Hollywood.

Rival business owners opened up imitator restaurants. His bartenders were poached by rivals. Ray Buhen in 1934 started working for Don, by 1937 was making $25 per week and asked for a raise, Don said no. So Ray went to work for the Seven Seas for $40/week.

Ray and other bartenders kept the recipes secret for job security- they knew Don's recipes but nobody else did. All the bartenders kept secret little books of recipes written in code. They wouldn't tell their new bosses what was in the drinks when they left, so could always secure raises or go somewhere else that would pay them more, spreading Don's drinks around the world.

Ray Buhen moved on to a couple other bars after that getting paid more each time, and recipes left with him. Tiki drinks reached all the way to NYC fairly early on. There, a drink called Monte Proser's Zombie became a drink sensation because it was so strong.

In 1939 World's Fair Commission asked Monte to serve it at the fair. But this drink was originally Don the Beachcomber's Zombie. The Zombie was a way that got men to drink tropical drinks - they limited to 2 of the drinks and made it a macho thing to be able to drink them.

So Don was fed up with people stealing his bartenders and their recipes. So then he moved them to the back behind a door where customers couldn't see where drinks were made. But then bartenders didn't make tips, so even more bartenders left his employment.

Then Don started putting recipes in code "Markeza" was passionfruit syrup, for example, and other names were like Dons Mix #2. This was finally effective and stopped thievery/poaching.

So early Don the Beachcombers were very valuable people as they were the only ones left who had recipe knowledge.

Beachbum Berry got hold of (someone) Santiago's daughter's notebook. But it was all in code. Then he met the daughter and granddaughter of Hank Riddle, another Don the Beachcomber bartender. But his recipes were partially decoded. But Bum made one and it was terrible.

Depressed, he went to the Tiki Ti, his local tiki bar. Mike Buhen was working (son of Ray). He told Beachbum that these probably were not Don's Mixes but Don's Spices. So he needed to track down these spices.

A year later he met a bartender from Kon Tiki, Bob Esmino, and interviewed him. Bum was trying to get his secret recipes, but he wouldn't tell Bum initially. He told him about one of the spices #4 = cinnamon, and that he should just use spiced rum and leave out #2 spices. But since spiced rum is vanilla, cinnamon, and allspice most often, Bum figured it was vanilla and allspice syrup.

Don opened bars and restaurants around the world, went to Hawaii in the 1940s, opened up the International Marketplace where he had 3 restaurants.

But the most famous drink in Hawaii was always the Mai Tai, Trader Vic's drink.

Trader Vic was about 30 before he started bartending at his uncle's restaurant. He said he was a terrible bartender but great entertainer. But eventually his uncle fired him for being so loud and theatrical. So Vic opened a restaurant across the street from his uncle's place, Hinky Dinks. (It was designed like an Alaskan fur trapper's lodge). 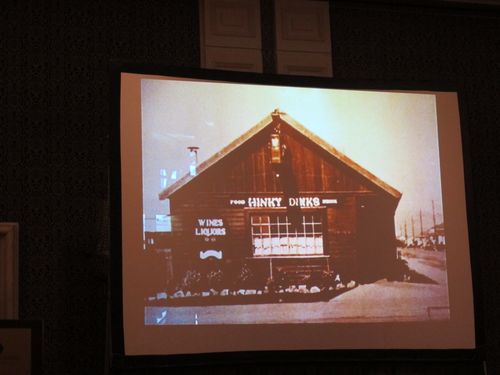 Later took a vacation and went to LA and went to Don the Beachcombers and realized it was a goldmine. He went up to Don and asked if Don wanted to make a chain out of it (when Don only had one restaurant), but Don said no. So Vic went home and turned Hinky Dink's into Trader Vic's.

Vic had a great palate - he wasn't content just to rip off Don but wanted to make his own style. In 1938 Vic went to the Caribbean to visit the bartender at La Floridita in Havana; Constantino. Constantino had dimensionalized the Daiquiri as Don had the Planter's Punch. Vic studied Constantino then went back home and made his own style of drinks.

Instead of mixing 3 rums together, he mixed different base spirits: gin, sherry, rum in the Fog Cutter. Used lemon in his sour mix rather than lime. And different sweeteners - orgeat. Invented the Mai Tai - it's a Daiquiri with curacao and orgeat. This may have been inspired by Constantino's golden Gloves drink; also similar to his Daiquiri #2 that was made with orange.

Trader Vic franchised very successfully, globally. He had 21 restaurants at the height of his popularity. Had his own rum brand and syrups that made him very rich. Perhaps one of the first celebrity chefs.

Why did the trend last so long? After its initial success in Hollywood, it was again bolstered by World War II. Soldiers returning from war saw tropics, stopped in Hawaii for R&R, then back home. So they wanted more Hawaii. Tiki restaurants kept the trend alive, book/play South Pacific. Then post-war economy was good and people could afford to go out to these bars like they may not have been to before. 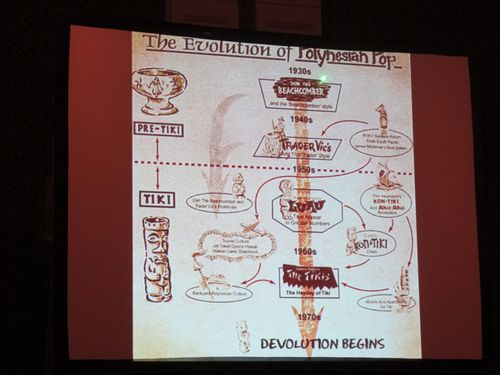 Then after Vietnam in the 1970s- the South Pacific was no longer an idyllic place as they saw all the images on television. End of tiki era.

1980s the dark period of tiki. All of the grand places closed. The lousy knock-off bars that never made great drinks that were cheap to run are the ones that survived. "Umbrella drink" became the descriptor, and not a positive one.

But a new generation of tiki bars is launching as well. These are really good notes!! I'm loving this post :D

Levittown, PA has Hong Luck restaurant. They've been around since at least the mid-1970's and the tiki bar is very popular. They just had their sign re-done (was probably the original sign before) and instead of the small sign saying "Lounge and Cocktails" it now says "Tiki Bar".