Zen and the Art of Japanese Cocktail Development

During Hawaii Cocktail Week at the bar The Manifest I attended a seminar lead by Takayuki Suzuki, in which Suzuki demonstrated several cocktails. It was terrific and I'll do my best to explain how so. 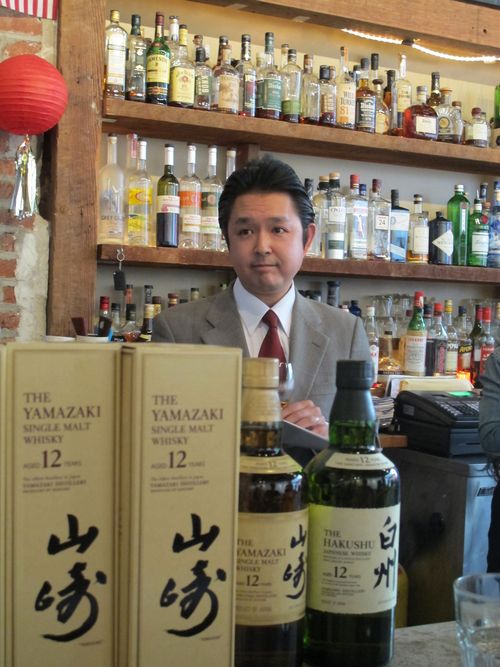 I think I've observed modern Japanese bartending enough now to make a few observations about their style and philosophy:

But Suzuki really drove home some of these points. Let's start with ice.

Ice is treated entirely differently in Japan than in other countries. In the olden days, ice was frozen in the winter in man-made ponds, then stored all year (as it was in America, except the ponds were already there). But in Japan, the ice was sometimes given as a gift in the summers, so it's still valued as something special. Bars in Japan (at least the 20 or so that I've been to) do not have their own ice machines. They have ice delivery service. And Suzuki says that even people at home don't use freezer ice - they buy it at the convenience store. So I guess ice is treated like produce. 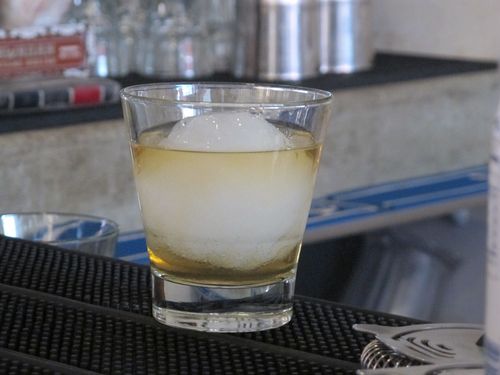 Though wabi-sabi is an aesthetic and philosophy with a lot of parts, the one we're concerned with here is making human things that reflect the beauty of nature. (Those green and blue liqueurs tend to represent leaves and water in cocktails.)

Suzuki says that when he carves an ice cube into an ice ball, it is with the wabi-sabi concept: the round ice ball is meant to resemble a river rock worn smooth by the water passing over it, representing the concept of 'floating time.'

And here we just thought it looked cool.

Japan has 24 mini-seasons, and many of Suzuki's cocktails are meant to reflect particular ones. The Bamboo Leaf Martini is set between the end of winter and the beginning of spring. First he seasons a cocktail glass with creme de menthe- adds some then shakes it out. The he makes a cup out of a bamboo leaf, which rests inside the cocktail glass. 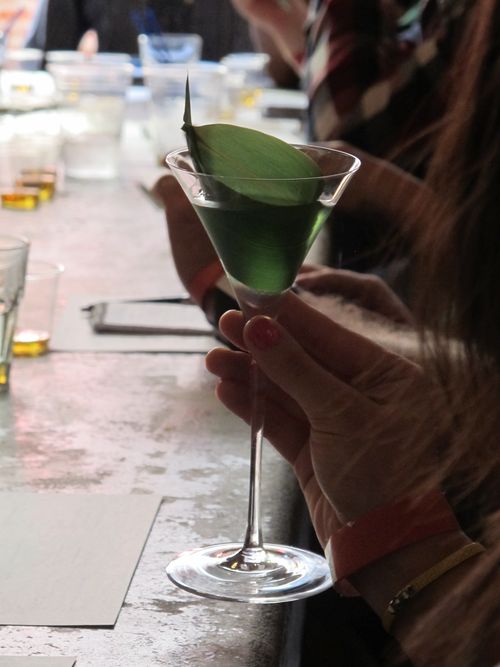 This cocktail represents the beginning of summer, which is signified with soft breezes. Suzuki adds a mint leaf and mint liqueur to a tall glass, then gently crushes the mint and discards the liqueur - this infuses the leaves with more mint flavor. Next he adds an ice ball to the glass, which seals it and traps the mint and its flavor beneath it. 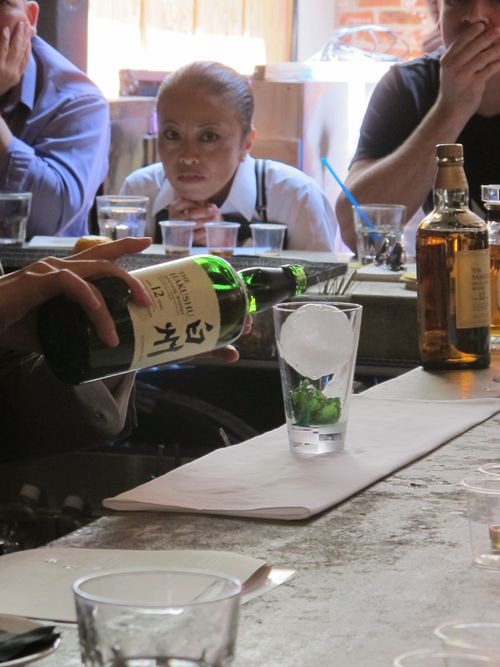 On top of the ice ball, he adds Hakushu whisky, plus tonic and soda water at the very top with mint leaves as garnish. Thus when you first sip it, it just has the scent of mint and soda water. You don't taste the mint at first but you sense it, then as you consume the drink, eventually the mint at the bottom of the glass will mix with the liquids above it and you'll taste the mint. This represents the movement of breezes. 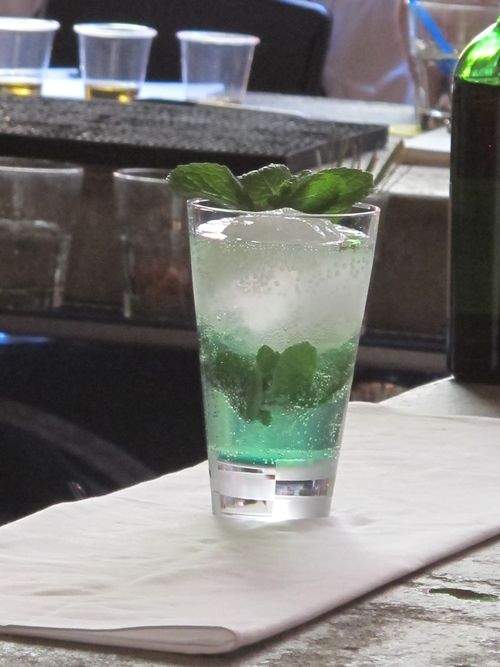 This cocktail is built around Yamazaki 12 year whisky. Suzuki says this whisky gives him tasting notes of apricot, tropical chewing gum, then a cacao flavor, and the essence of dried plants. When he tastes the whisky, it reminds him of taking the train to his wife's family's house near where Yamazaki is distilled; seeing the traditional Japanese houses, and thinking of the sun hitting the tatami mats inside those houses.

To recreate that, he mixes pineapple juice, apricto brandy, a touch of lemon juice, Yamazaki 12, and simple syrup in a shaker. He shakes and strains this into a cocktail glass then adds a float of dark cacao liqueur. To represent the tatami mat, he burns some dried lemongrass then adds this to the drink as garnish. 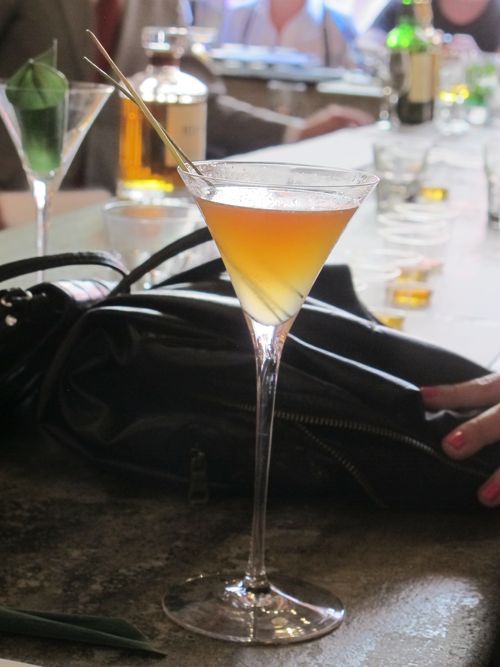 Suzuki says that when he teaches students to create cocktails, they begin with a blank sheet of paper and a base spirit. He asks them to smell and taste the spirit and draw or write the image of what the spirit reminds them of. Then he asks them in which season  the image is taking place, and/or who is there or what time of day and where it is. Only then do they start to think about the other ingredients that will go into the cocktail; only after the cocktail has a story is it manifested.

Takayuki Suzuki says, "The action of mixing has to have a reason." 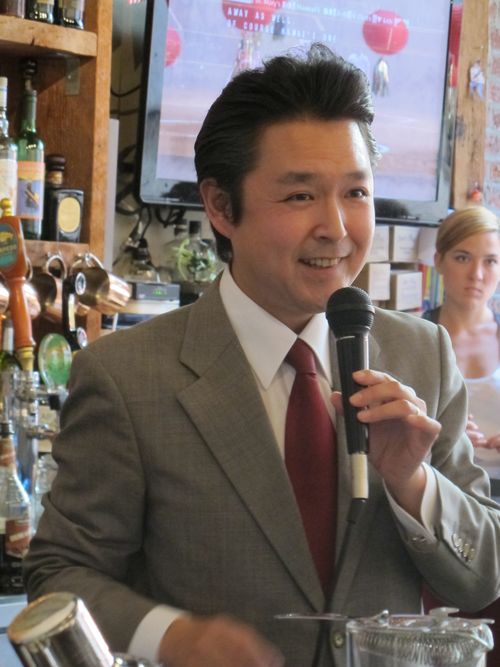 For some cool videos of Takayuki Suzuki demonstrating ice carving, the Mizuwai cocktail, and to learn more about wabi-sabi, check out this page.

If you'd like to learn more about cocktails and bars in Japan, here are some other blog posts I wrote about my trip last year.