The Drunken Botanist: The Plants that Create the World's Great Drinks by Amy Stewart is a truly impressive and important book that I'll be referring to for years to come.

The book is an entertaining encyclopedia of the plants that are used in fermentation and distillation, in flavoring spirits, and in accenting cocktails. Though botany is the primary focus, Stewart also explains how these ingredients are used in spirits and how fermentation, distillation, and different sorts of infusion work mechanically. 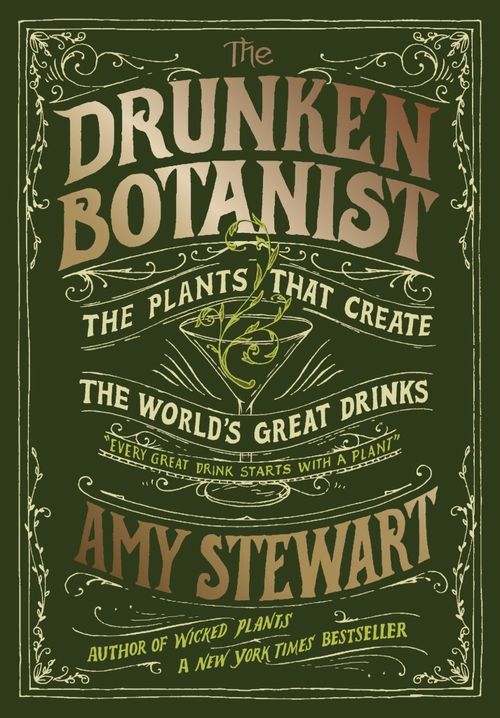 From the first chapter on agave I knew the book would be revealing. Though I've been to Mexico a bunch of times and know a lot about agave and tequila and mezcal production, I learned so much more by reading this chapter and was surprised to be corrected on a few popular mistruths about the plant and its history (like who named Blue Weber agave and how those supposedly pre-Spanish Filipino stills got there).

Stewart also tackles spirits production, like how yeast (and bacteria) work to ferment things into alcohol, and  sums up how malting works in a few paragraphs while it took me several distillery visits to Scotland to get it down. Other delights in the book include how to grow many of the plants mentioned, sidebars on the bugs you'll find in booze, and covers not just the popular plants but lesser-known ones like sundew, bison grass, and sorghum. There are a few drink recipes in the book, but as always you're best getting recipes out of recipe books. I will, however, try her simple recipe for pickling vegetables and give her olive brining technique a go a I failed so spectacularly at it again this year.

I honestly don't know how useful or interesting this book would be to the lay reader as it's what I do for a living, but I was both riveted and entertained by nearly all of it. You can preview it on Amazon but you should probably just pick up a copy.

Camper, have you read Sandor Katz's The Art of Fermentation? Not just about alcoholic fermentation -- he talks about fermenting everything -- but still up your alley, I'm sure, and a beautiful book in any case.

I haven't read it yet - thanks for the recommendation.