The Four Seasons hotel in San Francisco completely changed their bar in restaurant to be more casual, communal, and I'd say gastropubesque. It's now called MKT.

Four Seasons bars around the globe have been doing 100-mile cocktail programs in which ingredients are sourced locally, which is very difficult in some parts of the world and super easy in San Francisco. So while other bars may have one locally-sourced cocktail on the menu, MKT has tons of them. In fact, it is the focus of the entire cocktail program.

Oliver Lee, who is also the General Manager of the restaurant, also did the cocktail menu. He has sourced over 50 local ingredients (including spirits, syrups, and produce) for it, and the list should be growing a lot in the coming months.

Most of the drinks are spins on classics with local twists, like the Sazerac (called SFSZ), a raspberry Screwdriver, Cosmo, Dark & Stormy, and Espresso Martini. They're made with local spirits/ingredients, and often an added fun touch.

The pleasantly bitter and dry Espresso Martini is actually served in a coffee cup. The Cosmopolitan variation is served on a cranberry ice ball. Lee said they freeze a block of cranberry juice and use an ice ball maker to make individual balls. The Dark & Stormy (called the Light and Foggy here; remember it's a trademarked name) is made with a robust and habanero pepper-infused homemade fermented ginger beer that's worth the visit alone. There are three other menu sections: One is dedicated to a seasonal classic drink, with variations of it. Currently it's the Collins, with variations including tequila, bourbon, vitamin-infused vodka, and flavored vodka listed.

Another is a short selection of classic gin drinks, with your choice of gin for the picking. (They had local gins I hadn't even heard of.) I picked a homemade tonic with St. George Dry Rye Gin and was not disappointed.

The final section is punches including a Pisco Punch with Hum liqueur added. 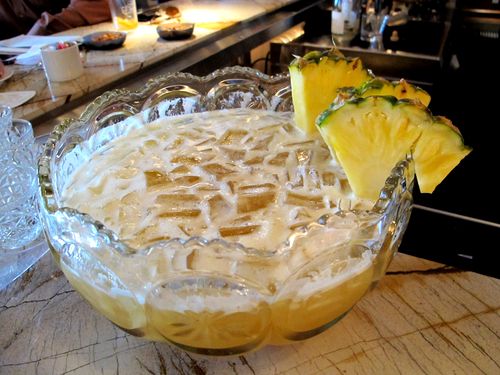 Overall, the drinks could use some fine tuning but it's the little touches of whimsy here and there- as well as the comfortable room with tons more seating than it used to have- that make this a nice addition to the off-the-beaten-track cocktails bars in town.

Gotta check this out.