A Visit to the Fernet-Branca Distillery in Buenos Aires, Argentina

Back in April I visited the Fernet-Branca distillery outside of Buenos Aires, Argentina. Some of you may remember me tweeting about it. Well, it's about time I gave it the formal write-up.

Fernet-Branca owns two distilleries: the main one in Milan, Italy, and this one in Buenos Aires. In past years there used to be many Branca distilleries in different countries (including the US), but as global shipping has become easier this model makes the most sense.

Production began in Argentina around 1905 or 1908 and has continued ever since. The current distillery was built in 2000 and it already at full capacity. 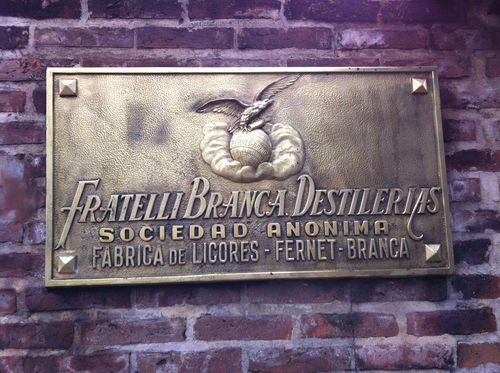 Surprisingly, the Fernet-Branca we drink in the US is made in Milan. The Fernet-Branca made in Buenos Aires is consumed mostly in Argentina but also South/Latin America.

I didn't directly ask if the Fernet-Branca made in Buenos Aires is made to the exact same recipe, but if you compare them side-by-side you can tell it is not. The stuff made for the local market is less sweet than the international version (makes sense given that they always drink it with Coke, never on its own), and some bitter elements seemed to be different in a way I can't describe. Also, the proof was different than the international version but I believe recently has changed to conform with the Italian one.

They do, however, willingly admit that they use only three different ingredients than in Italy: The base alcohol is a local 95% ABV sugar cane distillate, and the sugar cane is local as well. The water is also local, coming from an underground river in the area. Another local ingredient used is chamomile, but the same flower is exported from here to be used in the Italian production as well.

Unfortunately pictures were not allowed in the distillery, so below is the verbal tour. I should also note that this is not a distillery at all: the base alcohol is distilled elsewhere. This is the blending and aging facility, but to make it easy I'll just call it a distillery.

The first room we passed had the smell of caramel, and in fact that's where they were making the carmel coloring for Fernet, which they appeared to be doing by heating and stirring sugar in big tubs.

Most of the work in making Fernet-Branca is doing tons of separate infusions and macerations to get the flavor from the herbs, barks, roots, and spices into the spirit. Thus, the rooms that we walked through were full of different types of stainless steel tanks of a wide variety of shapes and sizes.

Some were small simple tanks, some were huge vats, some had stirrers and filters on them; some were sideways roller tanks that slowly rotate. Our guide told us that some ingredients are infused into alcohol; others into water. Some infuse separately; other ingredients are combined.

The longest infusion of any ingredient in Fernet-Branca is for 90 days, but our guide couldn't say which ingredient that was. We saw piles of burlap bags of chamomile, zedoria, and other spices from India, Spain, Africa, and Iran stacked in different rooms. Other herbs are kept in a refrigerated room. They store 2 years' worth of ingredients just in case there are any supply chain problems down the road.

Beneath the factory is a huge basement that stores tanks for aging Fernet-Branca. There are six cellars, plus two additional climate-controlled warehouses. These are full of gigantic wooden vats (one of them holds 100,000 liters!) aging the liqueur. Two of the smallest vats at the distillery date back to around 1908 and were used at the Italian distillery before being sent to Argentina.

Each tank ages separately, but before bottling they pour the Fernet-Branca into one tank that is connected to a series of other tanks by tubes. They only draw the finished product out of the last tank, so this is a way to marry and blend a great quantity of the Branca for consistency.

The factory is running at full capacity making 4 million cases every year, and presently and they are expanding to double that over the next few years.

Mix it with Coke. They never drink Fernet-Branca on its own; I'd hazard a guess to say that almost nobody has ever even tried it neat there.

It's funny that to us Fernet and Coke sounds repulsive (while to them drinking Fernet-Branca neat sounds like drinking radiator fluid), yet it's not actually that bad. They seem to treat it like an everyday cocktail like a Gin & Tonic, but I actually didn't mind it as a digestif after a meal. 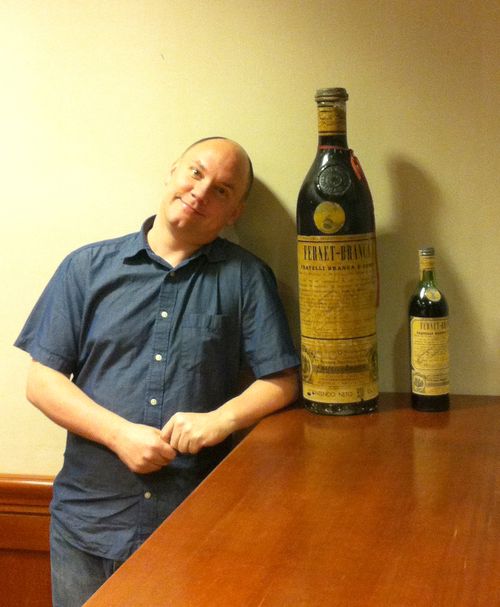 I loved hearing about the various tanks. I never thought it would taste good with Coke until a friend of mine poured me a glass. It's addictive. Thanks, Camper-- great picture, too!

From memory they also had some Fernet drink there, called 'three bitters' or something, that mixed Fernet, tonic, and some other bitter thing - can't remember what. It tasted alright though.

Yeah at first you're all "That's nuts" and then it turns into "Maybe they're onto something after all..."

I had a lot of drinks with various amari and sweet vermouths- nearly all the cocktail bars had a menu section for it.

Question: Is the "distillery" tour generally open to the public, or did you have to use connections to get a private tour?

My wife and I are going there in Nov. and would love to check it out.

Hi- Unfortunately it is not open to the public.

Every Argentine I've met refuses to believe it's an Italian product -- they all think it is and always has been Argentine.

Many people drink it "neat". But they are from Italian families. In my case, my "Nonos" from my mother side, always drink it after a big meal or some times before. To Tony: I know that it is an italian liqour, but consider the amount of italians that came here. They, their sons, and thier grandsons to, keep it as a custom that the rest of the population, locals and other inmigrants (spanish, germans...) took like their own. I´m very sorry for my bad english.
Ps: I have a couple of bottles of italian Branca and to me it´s sweeter.

Thanks - and I'm glad we agree that Italian Fernet-Branca is sweeter. That is what I thought.

I have always poured this straight up or over ice. I will now try it w/coke.I am afraid t his will, however lessen the effects of a digestivo which I usually use it for.

Thanks for this wrap up. I´m travelling through Argentina and though I really like bitters such as Campari and Cynar, I had never heard of Fernet Branca before. I really learned something here, and actually tried the Coca Cola version ... I still prefer a good old Cynar with lemon juice while cooking or a Campari with two slices of oranges as a apperitif, but will try more cocktail recipes I just founded while doing some quick research ! Thx !

Read this after having some Fernet/Campari & Soda.