Home Books Blog Clear Ice Talks Hire Me About Search Contact
Bartenders, Your Chance to Work Abroad in the Auchentoshan Switch
A Whisky and Water Tasting 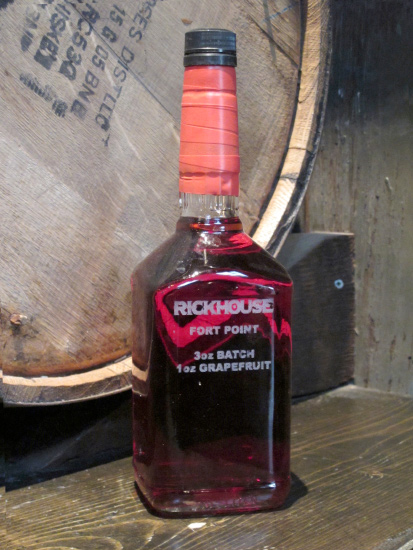 A partially batched cocktail at Rickhouse

If the popularization of craft cocktails has a negative side effect it’s that  it has set our expectations for a good cocktail pretty high. We want a great cocktail EVERYWHERE we go; not just the high end bars. The baseline even for a decent cocktail is not what it used to be. Just go into any airport or hotel bar and watch them make you a $20 cocktail with sweet and sour mix and we'll hear the wrath of your anger on Facebook (although admit it: you love doing it).

For the most part we drink a lot better than we used to, in a lot more places, but we still want better drinks everywhere, and we want them fast.

The response to that demand has been to batch up cocktails, and initially punch was a natural segue, with daily punch specials showing up at bars around San Francisco like Alembic. Now punch is getting even faster. Trick Dog serves a trio of large format bottled cocktails including a Kingston Punch and Buttermilk Punch as a way to get drinks into the hands of groups even faster.

At Novela, Alex Smith and Kate Bolton serve up punch from kegs, with a rotating selection available by the pitcher, glass, or flight. This system smartly scales to get drinks into the hands of large parties or individuals, but Smith also finds that they improve over time with the flavors of ingredients like oleo saccharum marrying together. 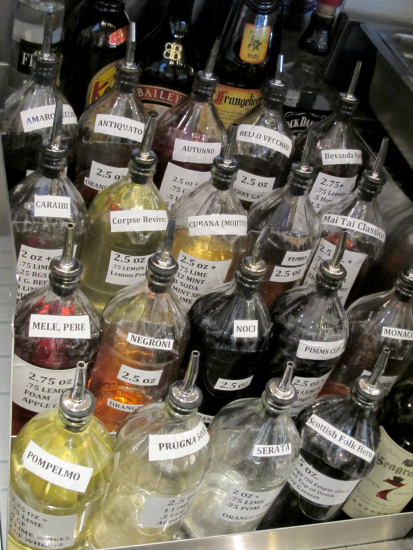 Scott Beattie batches everything but the citrus

Batching Portions of the Drink

While punch is a great solution for speed, not every bar can have bowls or kegs of punch, but building in speed by eliminating a few steps is possible with partial premixing. At many of the bars he has consulted and works at (like Goose & Gander, BUILD Pizzeria in Berkeley, and Hi-Lo BBQ), Scott Beattie has set up systems where everything but juices gets premixed in larger batches, then bottled and accessed from the well. For Beattie there are many advantages: it allows for a kind of precision with bitters and modifiers that simply aren’t possible on a smaller scale, provides incredibly consistent drinks no matter which bartender makes them, and allows the bar to serve a large number of cocktails easily.

His method is to devise recipes in metric units to simplify scaling up, then list the formula for how much juice to add clearly marked on the bottle.

Working in a similar fashion, Dan Chavez Stahl and Lucien Sankey of Rickhouse pre-batch most of the drinks on the one-sheet speed menu, which helps them focus more attention with customersf and on the massive backbar selection of spirits.

Trick Dog deviates from the latter in that they only prebatch the spirits in their menu drinks—no sweeteners or bitters go in the bottle.  For Morgan Schick, who helps run the bar, the main reasons for not including bitters or sweeteners in the batches goes beyond the ability to further customize each drink. Schick believes the bitters settle and become less aromatic in batches, but also thinks that doing too much ahead takes away from the show. The dashing and measuring out of several bottles instead of just one for Trick Dog is the right amount of compromise: it shaves time off your customer’s wait for a drink, but still gives them a show and a sense of effort and that alone can make a drink taste better.

I was really stoked to see this article! I would always cringe when I would see our guests waiting, especially when it was 2 or 3 deep. Besides batching up our oak aged cocktails, we had also started batching up two spirituous cocktails to improve consistency and speed of service. I felt guilty doing this
but I just hated seeing guests waiting so long! I am glad to see we are not the only ones who want to improve speed of service for our guests. Great article Camper! Thanks! Now come and get It!

The only thing that I love more than prebatches is the debate over prebatches.

Some times there is no way around batching. We have an extensive barrel aged cocktail program at Plum Bar so at least a 1/4 of the cocktails are batched. I agree that fine tuning with bitters and modifiers is best done just before serving to the guest. A lot can happen to the taste of the mix after bottling.

Overall I really like batching, but there are possible drawbacks... When I was at one of the bars mentioned above, I asked the bartender a question about the recipe for one of the drinks on their menu and the bartender had no clue because the bar manager had made all the batches. He knew the ingredients, but not the recipe. Speed is good, but it's no substitute for a knowledgeable bartender, and I worry that too much batching could make it even harder to find & develop good bartenders.

Pros and cons for sure. did you get a good cocktail? Did you receive friendly service in a timely matter? They knew the ingredients but not the exact recipe? I can understand someone in the bar industry coming in and wanting to know the exact ratio and specific measurements, but ususally the general drinking public does not. My take: if I can get a good craft cocktail with good ingredients, I get fast and friendly service from a genuine bartender, and they know the ingredients that went into the cocktail, I'm happy. I'm not going to drill the bartender on the recipe, nor be let down since they probably were not the ones who batched.

It will disappoint the pompous and pretentious people who order over-wrought cocktails, and if they quit, who is left to spend such money on such pointless frivolity?

Face it, it's the "suck up" factor of the difficulty in making these that these egotists like, not the taste.

I'm not trying to write a yelp review here, I just thought it was important to point out that batching can stunt the growth of bartenders. Without batching, the bartender has to know what goes in the glass to make the drink. With batching, maybe they only know how much of the batch to put in the glass, you know?

Great points and discussion. I guess after many years in the bar business and seeing so much ego, I'm just happy to have a dedicated staff who focuses on the guest. If batching can help facilitate getting balanced drinks made with quality booze out to the guest a little quicker, awesome. I currently work in a bar where we partially batch the cocktails, and it works well. Sure, we get the occasional cocktail aficionado or another bartender in who has to quiz the bartender on recipes and the finer points of technique, but for the most part, everyone is happy to be getting a great drink in a timely manner.

If the bartender doesn't know that the drink was invented in 1873 and the original recipe was 2 ounces of this, 1/2 oz of that with 3 dashes of this, I'm ok with it. If they can tell me the liquor in the drink, make it quickly and make it well, and I enjoy my time in the bar, all the better. Should they be able to make me a classic Daiquiri if I ask for one? Yes. Should they be able to make me a new, cutting edge cocktail if I ask? Unless I'm at a bar that is known for that, I won't ask the bartender to do that. And I'm certainly not going to drill a bartender making batched cocktails on the recipes just because I'm a bartender too. That just seems crass and oozing with ego, no?

Sometimes, restaurants have very little time to teach and train. You also might have a staff full of people who only work 1 or 2 nights a week. If they're professional, care about the guest experience and the final product, batching can certainly help. As they gain more confidence and improve, start teaching them more about cocktail history and recipes. I think everyone wins, except maybe for the few people who feel the need to flex their knowledge at the bar.