Kevin Curtis is the Distillery Operations Manager for Michter's Whiskey. This company is building a new distillery with a continuous column still. He filled me (and the audience) in on how bourbon stills work. The below post is a combination of information gleaned from distillery visits, books, and Kevin's information at Tales.

The Purpose of a Bourbon Still

As opposed to some other types of stills, for bourbon the focus is not on getting a pure alcohol out of the still. By law, bourbon must not be distilled to above 80% alcohol by volume. The focus seems to be more on the continuous and stripping nature of the column still, as opposed to a discontinuous (batch) pot still.

More on that: If you know about single-malt scotch whisky, you'll note that it goes through a copper pot still. However, only liquids go into the still. Grains are fermented into beer, just like in bourbon, but in scotch the solids are separated from the liquid beer before going into the pot stills. In bourbon, the solids and liquids go into the still together (in practice; there is no law about this). In a pot still, one would have to be careful that the solids didn't burn against the still, making it even harder to clean than just scooping out the leftover solids.

How Liquid and Steam Moves Inside a Column Still

As you probably know, a column still is filled with perforated plates. The beer to be distilled is pumped in near the top of the column (but not at the very top), and steam is pumped up from the bottom of the column. While the plates are perforated, this lets the steam come up through the still, but the beer does not drip down through these holes. Rather, the beer runs across each plate to the other side, flows down to the next plate and flow across it to the other side. 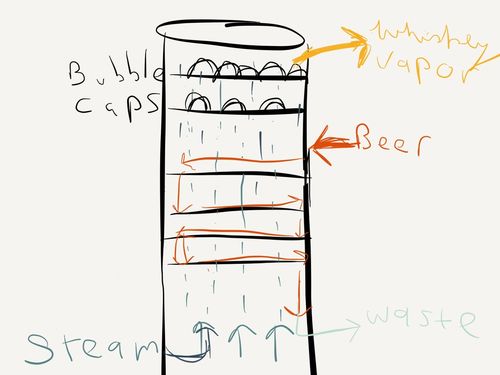 The Top Part of the Still

As I mentioned, the beer initially doesn't enter the very top of the still but near the top. Above that point in the still, the steam is being rectified on those plates. It is up there where copper is crucial, and where you find "bubble caps" in stills. More on those:

Column stills can be built from stainless steel but there needs to be interaction with copper at some point. In other stills (as we'll see in a future post), the part of the still where beer is being separated and distilled is stainless, and where the steam is being rectified there is copper.

Bubble caps provide additional refinement of the spirit and increase contact with copper. Some other stills (I learned this at Absolut) are filled at the top with bits of shredded copper or copper pieces that look like jacks for similar reasons.

This also makes it easier to replace the copper at the top of the still or inside the top when needed, rather than the whole still column that can last for decades.

The Doubler or Thumper in Bourbon Distillation

In a doubler, the vapor off the column still is condensed back into liquid and this is run through the pot still. In a thumper, the vapor itself goes into the still to be redistilled (and makes a thumping sound that I've never heard but I associate with the sound of radiator pipes clanging in East Coast apartment buildings).

This second distillation is needed to raise the proof of the distilled spirit a little further, and this can be done in a pot still because there are no longer any solids to worry about. The waste product of the doubler/thumper is additional water.

The only other place I can recall seeing continuous pot stills was in Jamaica for Appleton rum. According to my tour guide at Jack Daniel's, they do not run a second distillation through a thumber/doubler at all.  (see comments for a dispute on this)

Update: I was given permission to post this bourbon still schematic. You'll see that the beer goes into the still at Plate 15, the new-make spirit is condensed and sent to the pot still (doubler), then recondensed before entering the High Wine Tank at the end. 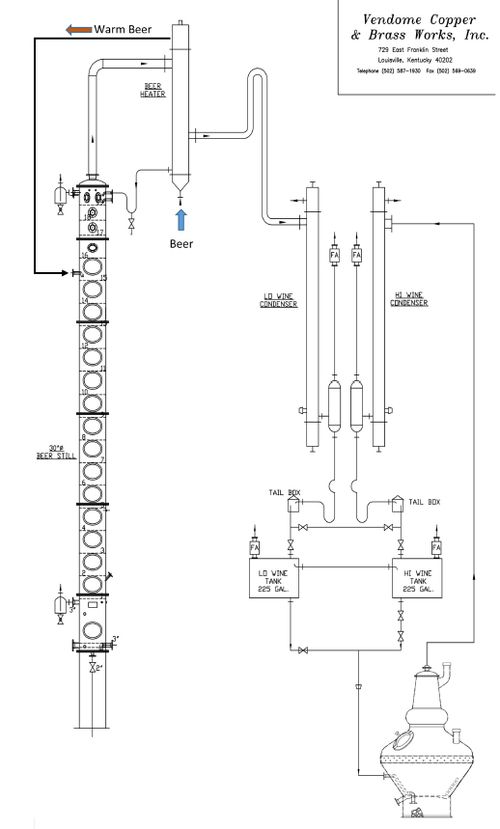 Anyway, that's what I think I know about column distillation in bourbon. If you have any additional questions (or corrections!) please let me know. In future posts, we'll look at other types of column stills and see how they work.

Thanks - Jack Daniels should really get their story straight. I even double checked it with our guide since it sounded odd not to have a doubler.

I don't see why they would deny having them if they do (since it's a further refinement of the spirit). Or maybe they just don't use them now? I went after Chuck Cowdery's visit as they have a new master distiller.

Tour guides are a notoriously unreliable source for information. I actually started a seeries of threads on the straightbourbon.com forums with title - 'Things tour guides say'. When I visited Jack a few years ago, my tour guide said:

-Jack Daniels Green label only comes from the lowest row of barrels in warehouse.

-Federal regulations prevent them from selling the Silver select 100 proof version here in the US, that's why it is export and duty free only.

-the proof was cut from 90 proof to 86 and then to 80 because that is what proof consumers like to drink it at. They cut it with their limestone water which is better for the whiskey than the water you would use to cut it from 90 to 80, so product is better.

Kevin Curtis at Michters? What happened to Willie Pratt, their Master Distiller?

Sounds like you got a doozy of a tour guide on that one!

I was with a group of press vips so it seemed they put a good guy with us but maybe I should have double checked with Jeff Arnett who we met later.

He's still there, worry not. They thought that Kevin Curtis would be a more appropriate speaker for this talk.

Very interesting article to see what is going on under the hood at the big bourbon distilleries. From what I understand a "thumper" is different from the continuous pot still. The thumpers I have seen forced vapor under the surface of a liquid--kind of like a bong--making a gurgling or thumping noise. The vapor is not condensed before entering the thumper.

A couple of questions--

What happens to the stillage from the "doubler"? Seems like the tails would build up in the continuous pot still portion. I suppose there must be a continuous drain from the pot?

Also any sense on how the heads are removed from the spirits--i.e., is there a heads cut removed somewhere in the process?

Hi - Good questions! I don't know the answers so I sent them along to Kevin Curtis in case he has the time to answer. Fingers crossed.

In the last sentence of the section "How Liquid and Steam Moves Inside a Column Still", you state the water has a lower boiling point. I believe you meant a higher boiling point.
Nice column, thanks for taking the time to put it together.

Good column, but a few revisions you may consider.

1. Steam is not being rectified above the feed tray, the distillate is being rectified above the feed tray.
2. The second distillation (action of the doubler or thumper) is not to raise the proof and has nothing to do with the presence of solids. The beer solids in theory should not make it above the de-entrainment tray (tray above the feed tray) there are many different techniques to achieve this and some are more effective than others. You could produce a spirit approaching the azeotrope (191 proof) with a continuous beer still given the right number of equilibrium stages (trays). The reason for the second distillation is because as the composition of the distillate changes so do the relative volatilities of its components. You are basically diluting the distillate from the beer still and then distilling it one more time. The dilution changes the relative volatilities of some components making them easier to remove in the tails stream.