This week over the course of two days I helped judge the San Francisco regionals of the Bombay Sapphire Most Imaginative Bartender competition. We toured San Francisco and hit six bars to watch 8 bartenders make drinks.

Brian Means of Fifth Floor Restaurant created the Stone's Throw, a reference to stone fruit, made with Bombay Sapphire, roasted apricots, citrus, and orgeat. It was garnished with Thai basil and a really delicious spice mix. 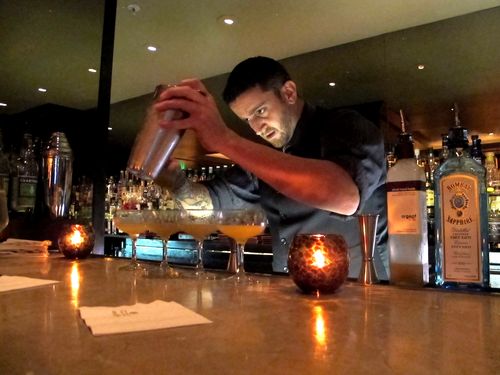 Marguerite Regan of Rye made the Mumbai Mist. It contained a pepper tincture, lime, and Bombay Sapphire gin. These were shaken then poured over top of a ice cube made from matcha tea with a hole filled with creme de violette. It was then topped with a purple and yellow flower that matched the yellow of the ice cube. Beautiful (wish the picture was!) The drink changed over time as the ice melted and the tea became more prevalent. 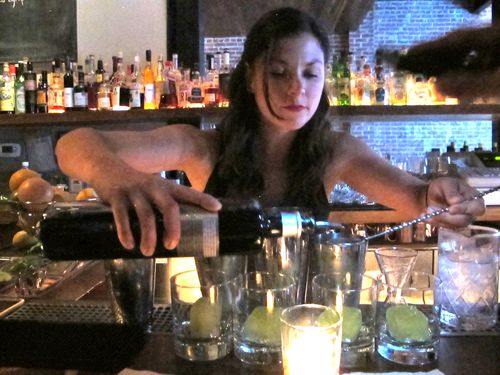 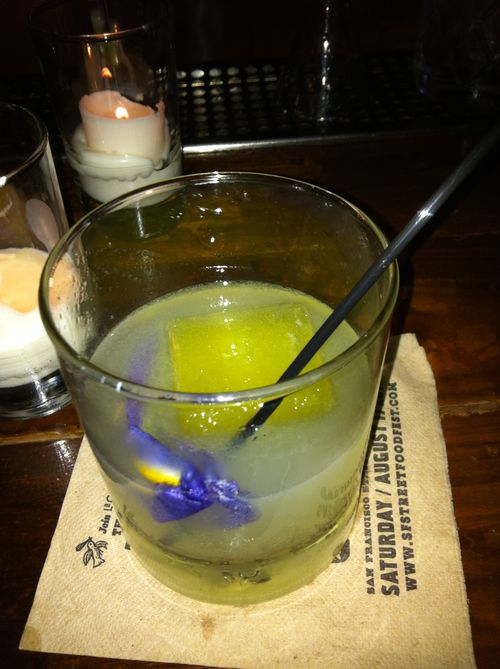 Spencer Warren at Jasper's Corner Tap made the Ambrosial of muddled jalapeno, bitters, ginger and lemongrass syrups, lemon, and Bombay Sapphire gin. It was topped with paprika and a couple drops of mezcal. Spicy! 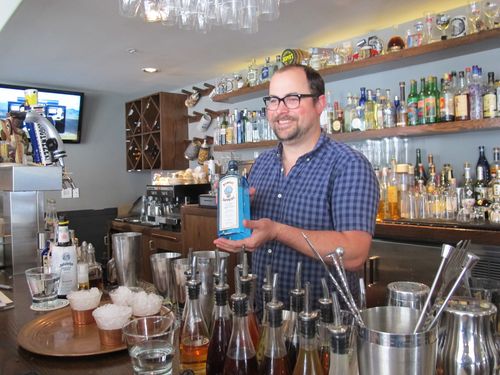 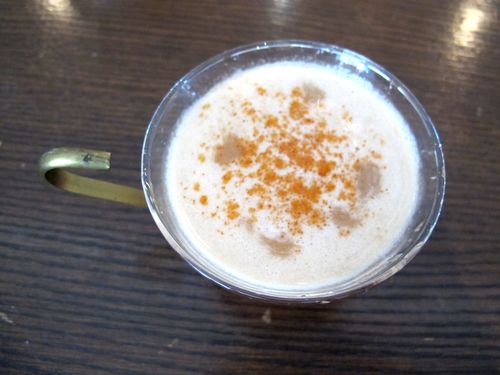 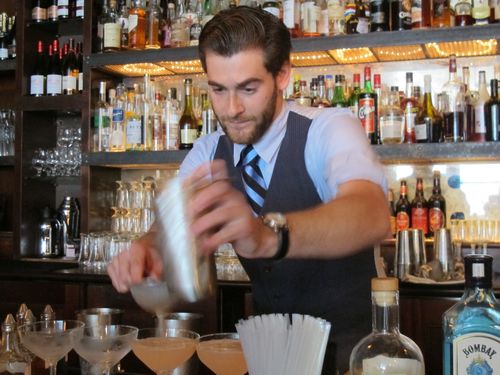 John Codd of the hopefully-soon-to-be-reopened Heaven's Dog made a drink called Sir-C (apparently a Game of Thrones reference) with Bombay Sapphire, creme de menthe, lemon, riesling wine, cane syrup, and egg white. He garnished it with mint and lemon zest. 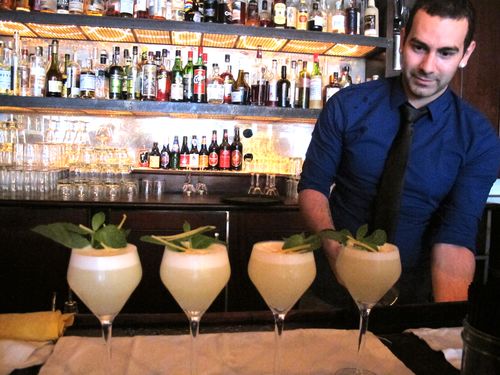 The Third Place winner was Mathias Simonis of Trick Dog. He made a drink called The Burma Shave. It contained Bombay Sapphire gin that was fat-washed with duck fat, apricot liqueur, orgeat that was infused with ginger and lavender, lemon juice, and egg white infused with various bontanicals, bitters, and anise. Wowza! 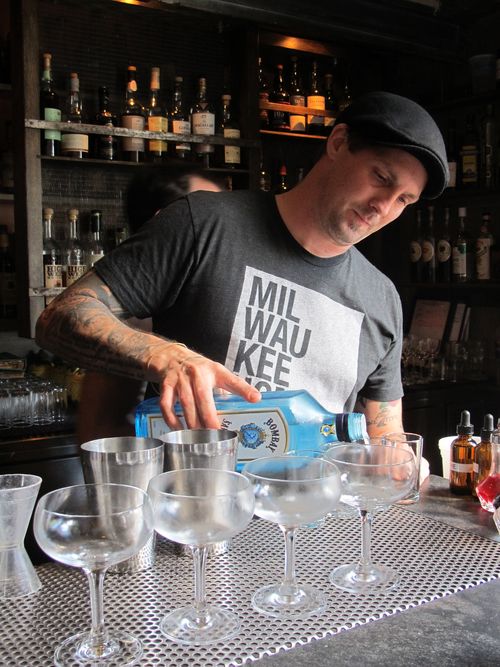 In Second Place was Trent Simpson from the forthcoming La Urbana (check out that funky back bar!). He made a drink called the Gin Blossom with elderflower liqueur, honey syrup that was infused with ginger, orris, basil, and coriander; lime juice, and an absinthe rinse. It was garnished with a piece of burdock root and burdock leaf - both of which could be chewed and changed the way the drink tasted when it was done. Fantastic. 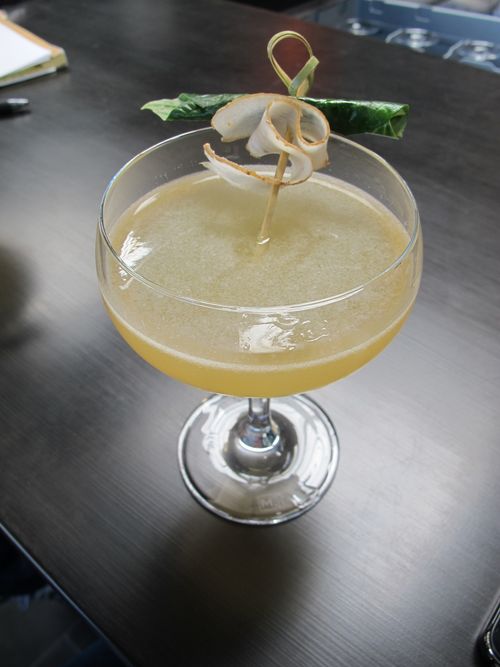 The winner of the SF regionals of the 2013 Bombay Sapphire Most Imaginative Bartender contest was Morgan Schick of Trick Dog. His drink was both relatively simple, very smart, and tasted ridiculously good.

It was called the Green Arrow and was a variation on a Dirty Martini. It contained Bombay Sapphire gin and Dolin Blanc vermouth. Instead of stirring the drink over ice to add dilution, he chilled all of his ingredients (including stirring pitchers) and added salted pea water for dilution instead. He also added a couple of dashes of lactart to increase the acidity of the drink. 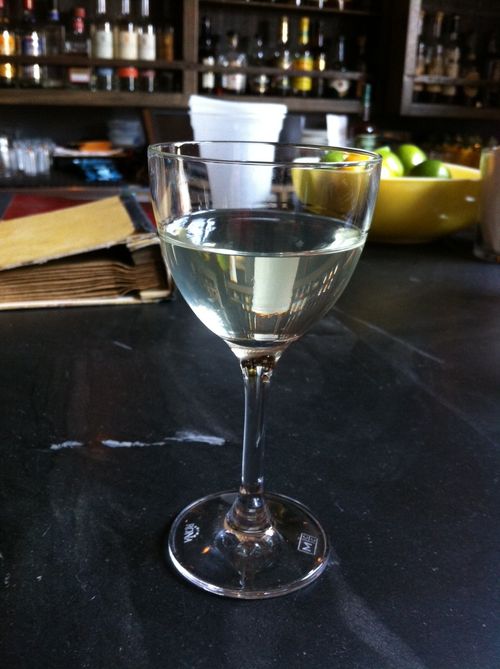 As Morgan will go to the finals, we wish him well and hope he finds some other way to phrase "pea water" as it doesn't necessarily sound as delicious as it tastes.

The finals take place in Las Vegas in early October. Watch the Sapphire Facebook page for news and updates.

Congratulations to the winner. The Mumbai Mist sounds delicious, and it should be possible to make it from your description.