There aren’t very many books on sherry written in English. The most classic one is Sherry by Julian Jeffs, written in 1961 and most recently updated in 2004 but seems to be currently out of print. That book is very detailed and quite dense, though also very thorough. However a lot has changed since it was written.

The 2012 book Sherry, Manzanilla, & Montilla: A Guide to the Traditional Wines of Andalucia by Peter Liem and Jesus Barquin is quite a different thing.  For starters, they don’t dwell too much on history- that section is about 15 pages long. But within the section was some modern history of which I wasn’t aware, including a Russian takeover of the industry in the 1970s and 1980s that caused both the modernization of the industry, but also some speculation that lead to overproduction. 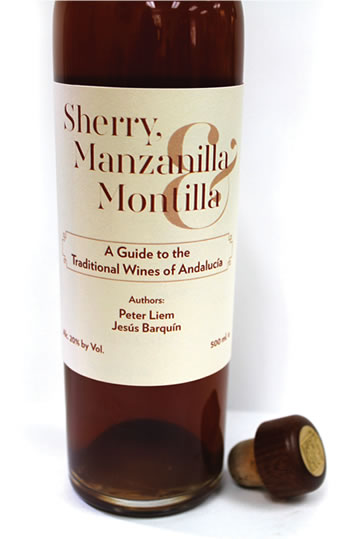 To me, it seems  difficult to understand anything about sherry without understanding all of sherry; to understand what you're drinking without putting it into the larger context.  There are many ways to tell the story of sherry, and none of them are easy.

It's helpful to understand the solera process, vinification, the unique local environment, aging factors, types of sherry, sweetening and fortifying methods, bottling, history, etc. My own method has been to first show all the types of sherry available on a chart, then to take big steps backward and explain how we arrived at it.

Liem and Barquin take a developmental approach: First we look at history, then the geography and terroir of the region, then the types of aging and the solera process, and only then the types of sherry one finds on shelves. Then they look at the bottling of sherries, the individual bodega aging terroir, and how to enjoy and even age sherry. Finally they look at the future of sherry as they see it.

All of that is only in the first 120 pages of the book. For the next 80 pages, they look at particular sherry brands and bodegas, and what each one does- unique practices, the house style of each, and history. I'll admit that the second half is something I'll only turn to for reference, but the first half I read (and underlined nearly half of) every word.

The appendix includes information on visiting the sherry region, which is something I highly recommend.

I suppose my only complaint is that there are almost no images or even charts in the book; just one map of the sherry region.  I read the book already having a pretty good understanding of sherry generally, so I don't know if the organization would throw people off or not - but if you're worried about it, just start reading and I think you'll get it by the time you're done.

I used this book a huge amount in preparing for my talk on the subject at Tales of the Cocktail and in developing the sherry chart for categorizing the wines, so it was certainly helpful to me. If you want to understand sherry better I'm pretty sure it will be helpful to you too.

You can buy the book from their website SherryGuide.net.