This post was sponsored by PAMA Pomegranate Liqueur but written by me.

I was thinking about the definition of a cocktail modifier recently and it inspired further thought: a modifier is defined by its use rather than what is in it. Last year I tried to come up with a definition of a modifier and here's what I decided:

A modifier is a cocktail ingredient, usually alcoholic and typically a fortified wine or a liqueur, that both softens the base spirit and adds flavor to the drink.

Examples of modifiers include liqueurs like triple sec and creme de menthe, and fortified wines like vermouth and sherry. But there is a pretty huge difference between dry herbaceous vermouth and sweet elderflower liqueur. So a modifier is not really defined by its composition but by its use, at least in my definition.

Now that I think about it, there are plenty of other examples in cocktail anatomy of things defined by use. Here are some:

Base Spirit: Alcoholic ingredients that form the foundation of a cocktail. Usually a spirit, but can be a liqueur (Midori Sour), wine (Sherry Cobbler), bitters (Angostura Phosphate), etc.

Mixer: Non-alcoholic ingredient that thins out a cocktail, comprising of 50 percent or more of the total drink volume. Examples include soda water, tonic water, juices.

Enhancer: Ingredients not with their own flavors, but that bring out flavors or qualities of other ingredients in the drink or that add sensations. Examples include saline solution, MSG, capsacin oil, etc.

Thinners: Ingredients used primarily to lower the alcoholic content of cocktails, though they may add their own flavor as well. Examples include water,  vermouth, fino sherry, sake, soju, etc.

Floats: Ingredients poured atop drinks in a way that they do not mix much with the liquids below, for the purpose of altering the aromatic, alcoholic content, or other perception of the drink. Examples include a float of dark rum on a Mai Tai, spritz of lavender on an egg white drink, mezcal float to add smoky element to a drink.

I'm sure there are many more of these. I would love to hear your ideas as I think we can decide on ingredients that have function and form and see how they may or may not align. 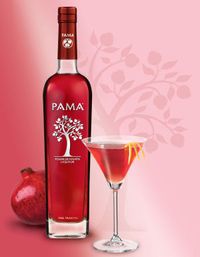 As the indispensable modifier, PAMA not only brings the essence of pomegranates to a wide range of cocktails, but also vibrant color, mouthfeel and balance without overpowering them

+ PAMA’s acidity and tannins create texture, body and structure in cocktails, as they do in wine

+ Using PAMA as a modifier, bartenders can transform an expected cocktail into a surprising “star” drink that will get them noticed

In the context of cocktail ingredient function as discussed above, PAMA could be a base spirit, a modifier, an accent, or a float.

I think we're cooking up something interesting here.

And finally, a recipe in which PAMA is a modifier: 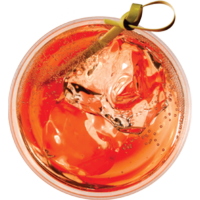 Method: Combine all ingredients except ginger beer in a shaker. Add ice and shake vigorously. Strain over fresh ice into Collins glass and top with ginger beer.

How do different types of garnishes fall into this structure? Obviously most garnishes provide flavor to the drink itself as floats (lemon oil) or accents (mint) while still others might be considered purely visual, or as a separate, paired food item.

Also, should glassware be addressed? There are tangible ways a coupe and a flute alter the perception of an otherwise identical drink, no?

Good call. Aromatics as a sub-section of accents could include garnish.

Visual accents could be another category that would include not just decorative garnish but also vintage glassware and clear ice (as they don't necessarily contribute to the flavor).

I think glassware is super important (and as a cocktail contest judge I often deduct points for the wrong choice of glassware). Do we call this 'format' as opposed to a drink ingredient structure? Seems along the same lines (categorizing cocktails) yet different for being a serving format rather than an ingredient.

I don't know, but I like thinking about it.

Using it instead of a base spirit.