Liza Cordero is the Process Director for DonQ rum, made at the Serralles distillery in Puerto Rico. She runs a pretty gigantic 5-column still. It makes DonQ rum and also custom products for other brands. The information below is from the seminar as well as what I've learned in my distillery visits around the world. 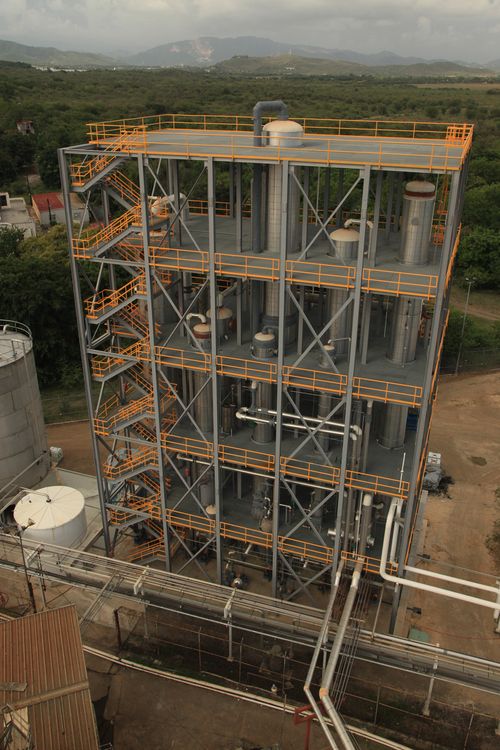 The stills that make DonQ Rum

In my last post, we discussed how bourbon is made in a single column. The single bourbon column specializes in being continuous (as opposed to a batch-run pot still) and separating the alcohol from the water and from the solids in the low-alcohol beer that is put into it.

In a 5+ column still, this is also what is happening, but just in the first column or two. (It seems that columns can be split or divided in two according to purpose, or in some cases just to keep the height down so that airplanes don't hit them.) The center  columns are for refinement of the spirit. The final column is for recycling of waste alcohols.

I can't claim to fully understand what is happening in each of the three middle columns exactly (yet!) but between the seminar, a detailed description of Grey Goose, and two Absolut vodka distillery visits it seems that the columns do five different things:

So that's what I think I know about multi-column distillation for high-proof products like rum and vodka. If you have any questions, let me know and I'll try to get them answered.

can I make vodka in a rum distillery?Am I going to need a lot of equipment or mainly 1 or 2.

Hi,
It's very interesting, not many people tell us about stills. Thank you!

Do you know what inside the rectification column and the methanol removing one? How can these columns do it?

That's beyond my knowledge.