How Martini Vermouth is Made: A Trip to Pessione, Italy

This summer I took a trip to Pessione, Italy, the home of Martini vermouth. Pessione is a small town just outside of the city of Turin, in the northwestern part of Italy. 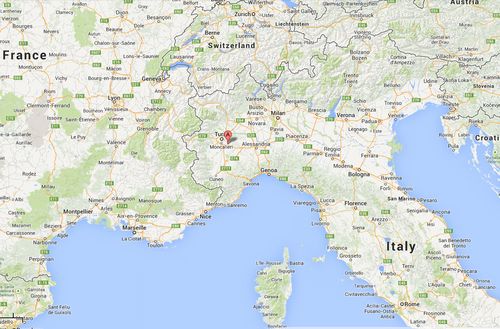 The distillery site was chosen as it is close the the railroad, though it is also close to both wine-growing and herb-growing regions. At the distillery, they produce not just vermouths, but also a range of sparkling wines.

They also produce more than that: 17 wine-based products and 12 spirits are made at the distillery altogether. But we were there to talk about vermouth.

Luckily, a series of signs made it easy to understand and explain.

Martini vermouths are a combination of wine, fortifying alcohol, herbs in the form of extracts and distillates, sugar, and coloring caramel for certain products. Then the vermouth is cold filtered. The secret, of course, is in the combination of herbs, spices, flowers, roots, and bark that go into each type of vermouth.

These get into the vermouth either in the form of distillates (they are added to alcohol and distilled), or extracts (they are infused into alcohol).

Seventy percent of the botanicals used for the vermouths come from a local cooperative that we visited. 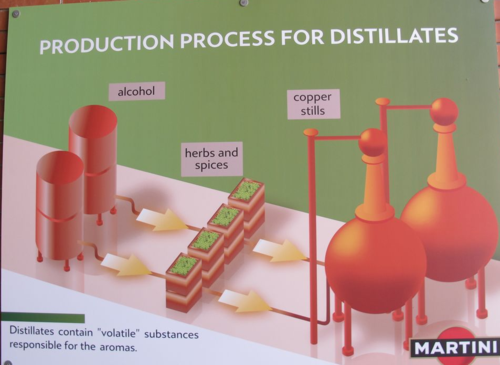 They have a lot of funky looking stills in the distillery. Click on the thumbnails below to see a few different ones. 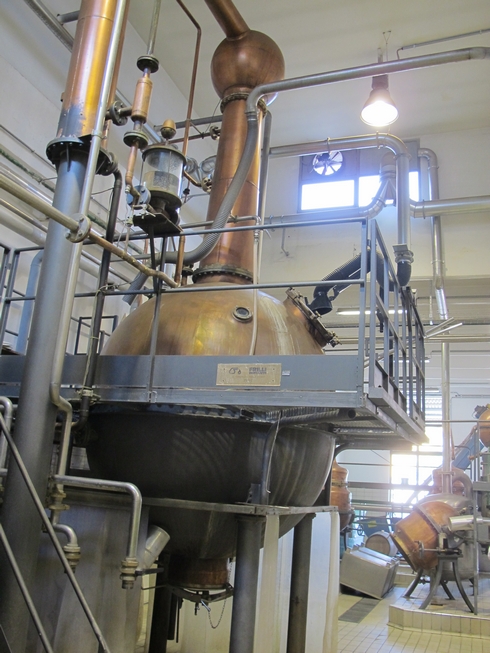 To make extracts, they use rotary extractors. As you'll see in the chart below, some extracts are aged afterward. 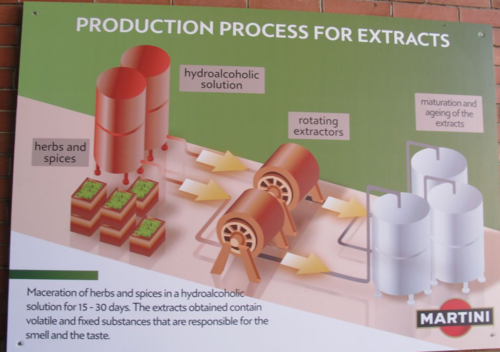 In the new Gran Lusso vermouth, one of the extracts was aged for 8 years.

The extracts, distillates, wine, sugar, and caramel coloring (if used) are combined in gargantuan stainless steel tanks to blend. They are added in a certain order so that materials won't precipitate out of solution. 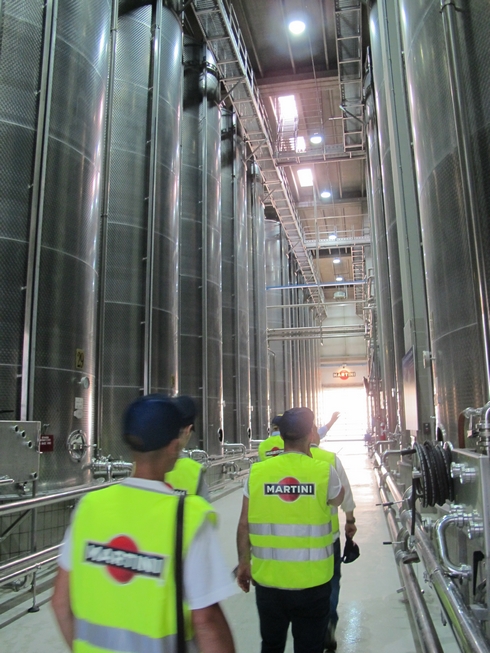 After blending, it's a 20 day process until bottling. They let the blend rest so that some stuff does precipitate out, then cold filter it, then bottle.

(Filtration nerd bonus: They use both .65 micron cellulose filters and diatomaceous earth to filter the wine).

Every day they make 400,000 liters of Martini vermouth in this facility.

In the next post, we'll look at some of the locally-grown herbs used to make Martini.

Was great to have you with us in this trip for the celebration of such milestone, now let's get the Vermouth out of fridge and have a glass and cheers to our SALUTE!

Thank you so much for writing this. I have been looking for information on how commercial vermouth producers make vermouth, and this saves me a trip to Italy :(...

the extracts, distillates, wine, sugar, and caramel coloring (if used) are combined in gargantuan stainless steel tanks to blend

what about the fortifying alcohol? Is this added to the wine before hand which means the wine in the statement above means the fortified wine or is the fortification spirit added in those humongous blending tanks or finally just before bottling?

Many thanks on this enlightening article