Absolut vodka is made in southern Sweden, in the town of Ahus in the Skane region. I took a trip there this winter to learn how the vodka is made. The distillery can produce 650,000 bottles of vodka per day and I had about that many questions for the producers. 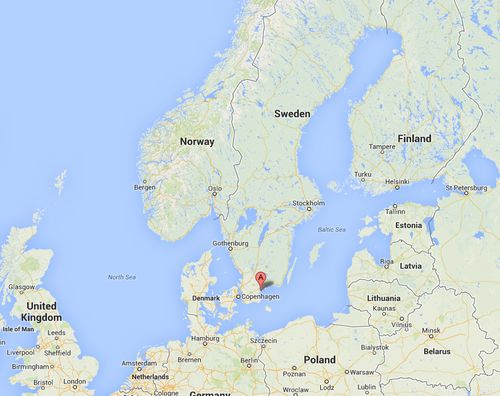 I think it's best to break the process of making the vodka down into its components.

Absolut purchases 20 percent of the wheat grown in the large Skane region of Sweden; about 125,000 tons of it annually.

It is winter wheat, planted in September and harvested in August, nearly a year later. The wheat grown in the southernmost part of Sweden near the distillery is best for producing vodka, while much northern wheat is better for use in making bread.

Wheat best for making bread is high in protein and gluten, and is heavy. It also has a low yield per hectare. Wheat for vodka is lower in protein but of course high in starch as that is what is turned into fermentable sugars.

Wheat crops are rotated with sugar beets, barley, and/or rapeseed.

Because Absolut is such a huge operation, grain is delivered to the distillery every two hours as they don't have space to store months' worth on-site.

Once the wheat reaches the distillery, it is ground into a flour and checked in a sizing machine to make sure that every bit of it is ground to less than 1.5mm in size. 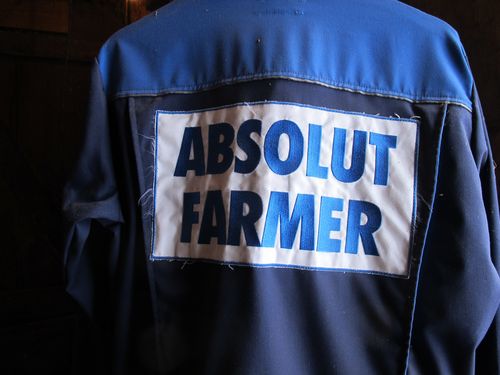 The region is set upon a natural aquifer from which they pull water 146 meters below ground. For the fermentation process, they only filter the water through sand. (For dilution to bottle proof, they use reverse osmosis filtration.)

They then heat up water with flour but instead of making paper mache with it, they add enzymes to break down the wheat into fermentable sugars. They actually use two types: a "liquification enzyme" that turns the wheat into long-chain polysaccharides, and a "sacrification enzyme" that turns these polysaccharides into fermentable sugar.

Then it's ready to be fermented in one of ten of their 600,000 liter fermentation tanks. They use a dried yeast culture that is first hydrated for 8 hours, and then added to the tanks where fermentation takes between 50 and 55 hours.

Heat and carbon dioxide are captured from this process and recycled or sold.

According to European Union law, vodka must be distilled to above 95 percent pure alcohol and bottled at a minimum of 37.5 percent ABV. It can be made from anything but if it is not made from grain or potatoes (as in the case of vodka made from sugar beets or molasses or grapes) it must specify that on the label. 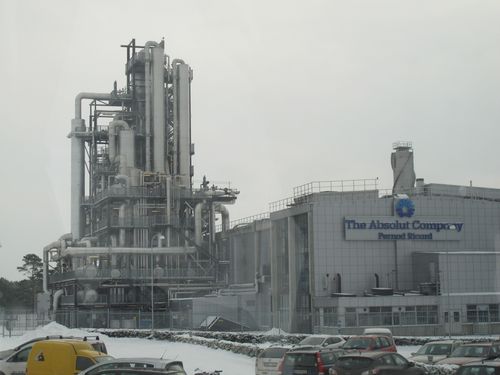 No surprise, the column stills at Absolut are very big. Here's how they break them down: 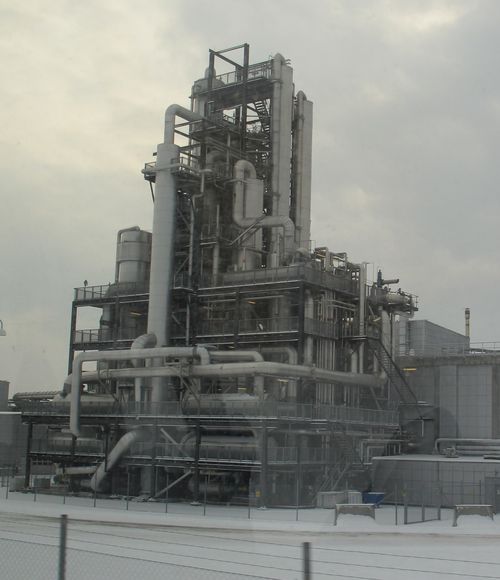 The water used to dilute the vodka to bottle strength comes from the local aquifer,  filtered with reverse osmosis. They say that their water still affects the mouthfeel of the product. One representative said, "The cleaner the water source in the fist place the less you have to clean it. It doesn't affect the taste of the vodka but it does the texture. It contributes a greater mouthfeel to the final product."

Unlike many vodkas, Absolut does not undergo "active filtration," also known as carbon filtration. Nor, they say, do they use any 'rounding' agents (like sugar or glycerin) in the unflavored vodka.

We visited one of the bottling facilities, which are usually pretty boring. But at the one we saw, three weeks' worth of vodka were stored in this massive warehouse. One room looked to be about 8 storeys tall with racks to hold palettes of vodka from floor to ceiling. In the tiny aisles in between the racks, computer-controlled forklift things would whip around in three-dimensions lifting cases and placing them on shelves or retrieving them to fill an order.  It looked a lot like the things that hold the doors in Monsters, Inc.

From the bottling facility, the majority of the vodka is shipped over water to Germany, where it is distributed to the rest of the world.

You should also make a trip to Koskenkorva, Finland, where famous brands like "Finlandia Vodka" and "Koskenkorva" are made.

That must have been an awesome trip, so much vodka!

Do they produce GNS for others from this facility?

Not positive about GNS but they are pretty busy making absolut. They also have another distillery where that could happen.

As far as copyright and trademark stuff goes, companies are required to enforce them or face losing them. Basically it both protects a company and turns them into jerks.

Two points: first, as mentioned in the replies to the quoted post, and as Camper English says, Absolut has to act on this copyright infringement in order to avoid creating a precedent and losing the exclusive use of the name and brand.
Second, from the interview of the salon's owner and his marketing strategy, especially online, it is clear he was banking on the name in search engines and was very aware of what he was doing. It's not like a guy who named his shop and stayed discreet or didn't advertise. He invested in promoting his salon and derivative products online using a name he was well aware was already a famous brand. I believe the previous owner didn't care when he chose the name, but the current one tried to make some profit out of it. It backfired, and he won't have to pay damages anyway, so he can consider himself lucky. But it's nothing like David versus Goliath.

Interesting to read and see, and above all to have had you visiting!
I work closely to Absolut, mainly as a bar consultant with the Akademi-program, so I can't help wondering, did we maybe have the chance to meet?

Hi- Not sure. I was there with the Akademi with mostly Americans. Matt Pomeroy and Ben Reed as our hosts.