Coming not-so-soon (January most likely) in the former Tokyo GoGo spot on 16th Street in the Inner Mission of San Francisco will be the bar ABV. 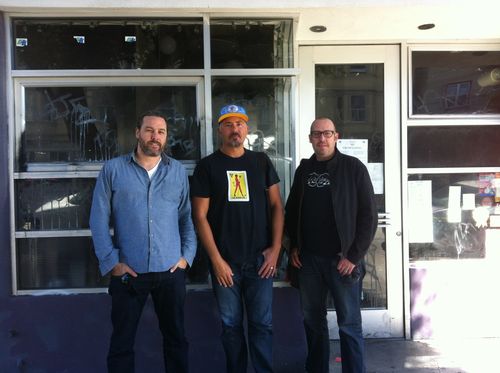 The specifics are likely to change a bit as they transfer the liquor license and build out the space, but here's what I learned in a meeting with the partners:

The concept is a bar that will offer about 10-15 cocktails and around the same number of small plates dishes, also priced around the same as each other (ten bucks more or less). So, like at Beretta, if you are having great drinks there you may as well order something to great eat as well.

The goal with the food (they're hiring a consultant chef to work out specifics) is to have high-quality, regularly-rotating, finger-friendly foods that will probably include some pickles and something fried, but not jalapeno poppers or standard pub fare like that. Food will be served until late; probably 1AM, and they are considering opening in the early afternoons, seven days a week.

The space won't be completely gutted for the rebuild, but they will make the kitchen smaller and remake the bar bigger; extending it to be the focus of the space. You shouldn't expect to too many bar design elements that they feel have become cliched, liked reclaimed wood and bare Edison bulbs. Seating will be primarily at high-top tables and shared tables in the back, to avoid that situation where people at low tables have standing bar patrons' butts in their faces. It will not be a lounge. They'll have some sort of table service and a doorman checking IDs, but not a host stand or typical restaurant reserved seating.

The drink program doesn't have a specific direction outside of "things that we like," according to the partners. "We're not trying to have every single whisky or tequila," says Reichborn-Kjennerud, though with Fitzgerald's mezcal affiliation you should expect to see a fair amount of that.

The team spoke mostly about what they are planning to avoid: barrel-aged cocktails, bottled cocktails, cocktails on tap; things they feel are more gimmicky than practical. "There's not going to be a uniform and it's not like everyone is going to wear a certain kind of hat." That said, they will have "great ice".

Cocktails will reflect their personal preferences and those of the bartenders who work there. Smith says, "A few years ago I was really into boozy drinks, but lately I've been enjoying lighter aperitif-style drinks, so for example you should expect to see some of that." The plan is for a good portion of the drink menu to change fairly regularly.

As time goes on, they plan to have a themed night or two, educational programming likely to take place in the balcony area, and perhaps some different food at brunch. They mentioned a quality soundtrack as a focus, but also that it could be radically different from night to night depending on who is working (as it is at Dalva Hideout currently).

The key words for the bar are "comfortable" and "affordable" they say. "We're not trying to reinvent anything," says Fitzgerald.

My overall impression is that they're trying to create a casual-but-quality themeless bar with great music, easy-and-delicious food, and amazing cocktails, reflecting the preferences and tastes of the owners. It's fair to say that's that goal of most people opening up a new neighborhood bar these days, but in this neighborhood with these owners, our expectations probably should be raised to match.

As ABV will be the second-closest cocktail bar to my house, I'm pretty sure I'll be able to keep you updated on its progress.