I'm researching tonic water for a story so I purchased the book Quinine: Malaria and the Quest for a Cure that Changed the World by Fiammetta Rocco. The book was previously published with the title The Miraculous Fever Tree, so don't be a dummy like me and order both. 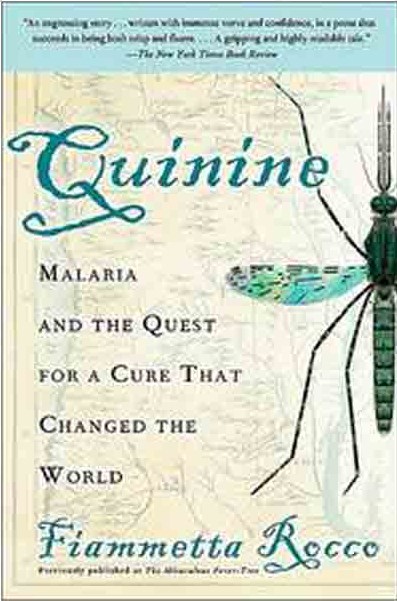 The funny thing about the book is that despite 300+ pages on the history of malaria and quinine, it covers just about everything except tonic water. Or rather, the mention of the creation of Schweppe's and Gin & Tonic are a mere two sentences out of the book.

The other way in which the book was a little disappointing was that the author spends a lot of time setting the scene, quoting from diaries of people who lived at the times she is describing in sometimes excruciating detail. A lot of it just seems unnecessary, though in a few places it's quite fascinating.

Other than that, there is a lot of good information within and between all the people stories. The book begins looking at how malaria was a menace in papal Rome, then how quinine was discovered in Peru (despite there not being malaria there) by Jesuit priests, then how Protestants were fearful of the Catholic medicine and were slow to accept its use.

It then tracks the quest to smuggle seeds out of South America and establish plantations elsewhere. These were successful, but then during World War II the world's supply of quinine and cinchona trees was captured by the Germans and Japanese.

It then tracks the quest to discover just how malaria was caught and how the mosquito transmits it, and finally it looks at one of the last cinchona tree plantations left in Africa.

The history of malaria, the cinchona tree, and quinine is fascinating. I may seek out other books for more information on all of it, and hopefully some better information on the creation of the Gin & Tonic.