Low Alcohol Cocktails in SF Getting Their Due? 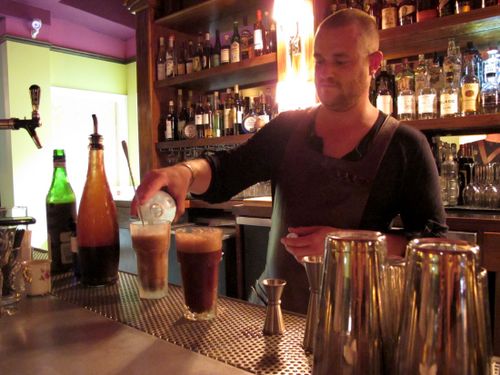 Just like classic cocktails endured their “dark ages,” low alcohol cocktails in San Francisco (and California) endured the era of saketinis, soju margaritas, and shochu cosmos. The way the liquor laws in the state work are that they allow a finite number of hard liquor licenses, but beer/wine licenses are much more readily available. In California it was hard not to think about low alcohol cocktails as a kind of compromise, like carob chips in cookies. But in the last few years, that’s been slowly changing.

And while the number of bars placing low-alcohol aperitif cocktails on the menus continues to increase, we have finally started seeing whole section of the menu devoted to these luscious, low octane drinks.

Range in the Mission launched a whole hour before dinner service devoted to aperitif cocktails. Although most are bolstered with a little spirit, they are light drinks meant to whet the appetite. Their menu gets drinks like a Spanish Bramble (amontillado sherry, blackberry-mint shrub, St. George Terroir Gin, seltzer), but also an intriguing inverted classics Uptown Downtown (Cocchi Vermouth Di Torino, Noah’s Mill Bourbon, bitters) that makes the whiskey the accent and the fortified wine the star in this flipped Manhattan.

Down the street, Elixir has a lengthy menu that includes Sutton Cellars & Soda, Schpritzer Sister (Lillet Blanc, chamomile citrus tea syrup, lemon, soda, strawberries), and the classic Spanish mix of wine and coke (its much better than it sounds), the Kalimotxo.

At the brand new Bergerac, nestled among the other cocktail categories is the low-octane section. It includes what is quite possibly the best new cocktail of the year: Annie, Forget Your Gun (Branca Menta, housemade chocolate syrup, phophate, soda, mint). I’d buy this by the liter if I could.

In the Marina, the newly opened Café Claude, the menu has a Cheeky (cava, cocchi americano, lemon), but also the Greenwich Stroll that lime, honey, and the sweet fortified wine from the Cognac region of France, Pineau des Charentes.

Does this mean we’re in a new, lighter drink golden age? Or is this just the last frontier of the cocktail renaissance?

I say it just means we're finally getting back to the full spectrum folks were enjoying in the 19th century. Took us a while, but now that it's here, we should enjoy it!

I think it is just a real alternative to high booze drinks and lighter refreshing drinks.

Also can be lower in calories for those who watch that stuff...

I wrote something about this on my blog a year or so ago...real alternatives to the "skinny" con game

I meant an alternative to boozy drinks in the form of lighter and more refreshing drinks...using club soda, wines, aperitifs, etc ...stretching out the booze or starting with lighter ingredients

Yeah I don't think BBS drinks are sustainable when drinking over the course of a long evening, as industry folk tend to do. The trend may be driven by industry drinkers more than consumers but I think it's good for everybody!