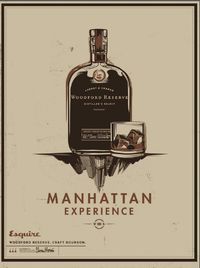 I helped judge the San Francisco semi-finals of the Woodford Reserve Manhattan Experience this week. The competition took place at Tradition in the Tenderloin, and my co-judges were Dave Smith, distiller at St. George Spirits, and Mollie Casey. Director of Spirit and Fortified Wine Sales for The Henry Wine Group.

The goal of the contest was to make the best Manhattan variation using Woodford Reserve. Points were given for appeal of the drink, creativity/originality, appearance, and taste.

When I think about what makes a Manhattan a Manhattan, I think: Serious, Somewhat Strong, Sweet, Bitter, and Balanced.

(Sorry for the cruddy pictures, I'm trying to get some others to supplement these.)

Ashley Miller of Hakkasan San Francisco made The Bitter Reserve with Woodford, Gran Classico, lots of sherry sprayed on top, and a candied orange zest garnish. 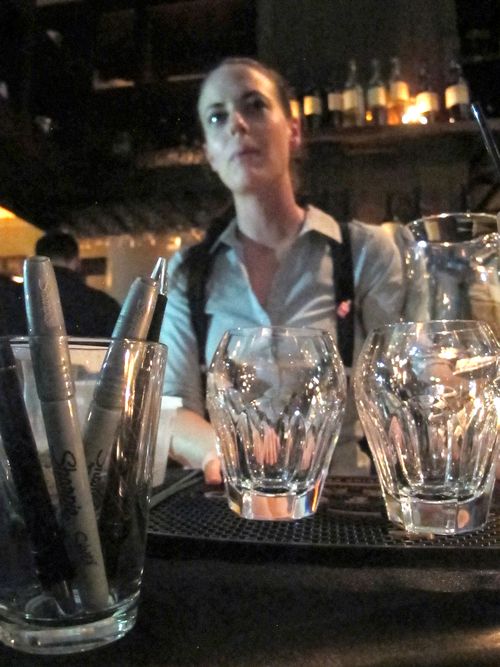 Matt Grippo of Blackbird made the Manhattan by Gondola (as in the boat, not the ski lift) with Woodford, Carpano Antica and Punt e Mes sweet vermouths, and Zucca and Luxardo Bitters. The drink was served on ice. 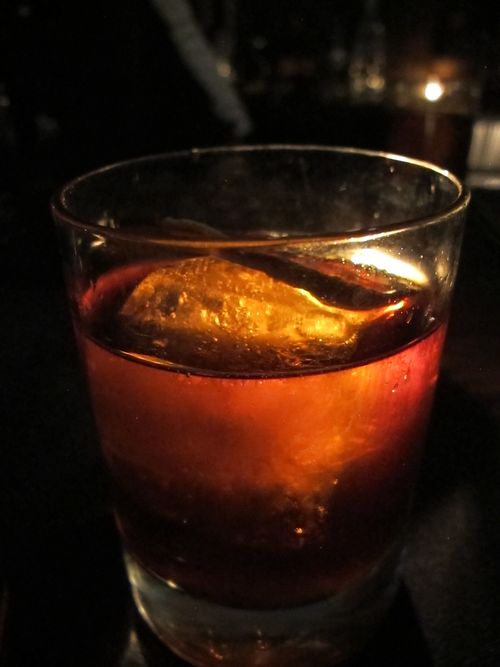 Jamal Robinson, who recently took over at Town Hall, made the Fillmore Faire with Woodford, Lillet Rouge, Calisaya, Angostura bitters, and a flamed orange peel. This drink was one in my personal top three drinks of the contest. 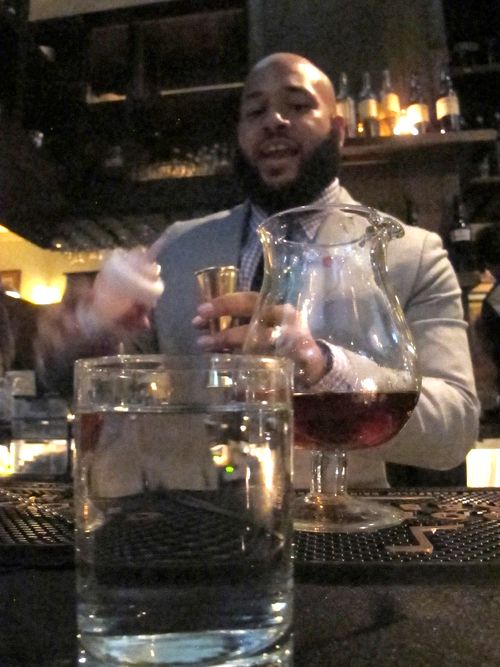 Mary Lemos of Moby Dick made the Manhattan Italiano by adding Disaronno to the  standard recipe, and garnished the drink with a flambe'd cherry. 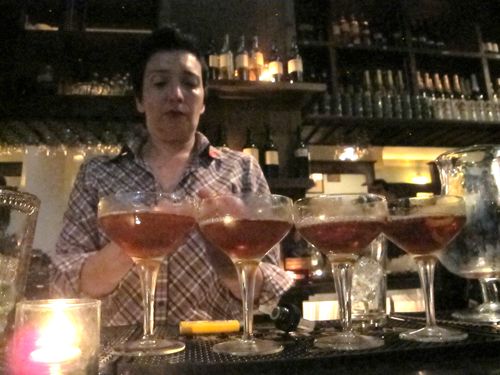 Joey Picchi of Martin's West created The Islay of the Hills with Woodford, Breckenridge Bitters, Cocchi Torino sweet vermouth, dandelion bitters, and a mist of Ardbeg. 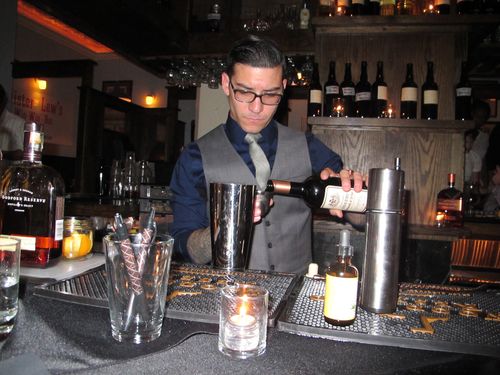 Erika Frey of Campo Fina in Healdsburg made another of my favorites, a less-booze Manhattan with Woodford, Vin Santo, Cocchi Americano, and Angostura bitters. She garnished the drink with smoked maraschino cherries that really changed the drink when you ate them. 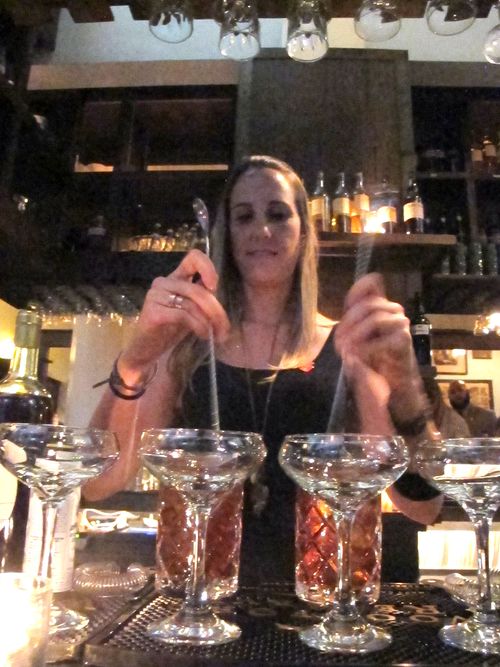 The Winner of the event was the last contestant Michael Lazar of Hog & Rocks.

Lazar made the Criollo #3 (it was the third iteration of this drink he's been working on for a while). It contained regular Woodford Reserve Bourbon, Woodford infused with cacao nibs from Dandelion chocolate, Cocchi Torino vermouth, Maraska maraschino liqueur, Cointreau Noir, Regan's orange bitters, and and absinthe-pressed candied orange peel inserted through a brandied Balaton cherry. The drink was deep and bitter, and Lazar balanced that bitterness against the juiciness of orange flavors in the drink. Both the cherry and the citrus peel were edible, and after eating them they added a whole new dimension to the drink. 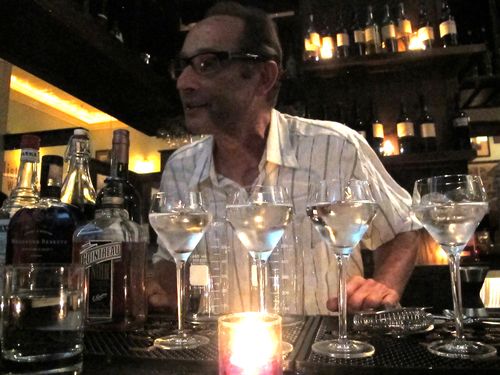 When it was time for the judges to debate the winner, Dave Smith went off to the restroom, leaving Mollie Casey and I to deliberate. We were like "Michael, right?" to each other so we knew we were in agreement. We secretly turned over Dave Smith's card to see how he scored the drink. He had just written BAM! in big letters so we knew it was unanimous.

Congratulations to Michael Lazar! He is one of 30 semi-finalists from around the US. Out of them, a smaller number will be chosen to compete in the national finals in New York next month. With this drink I hope he goes all the way. 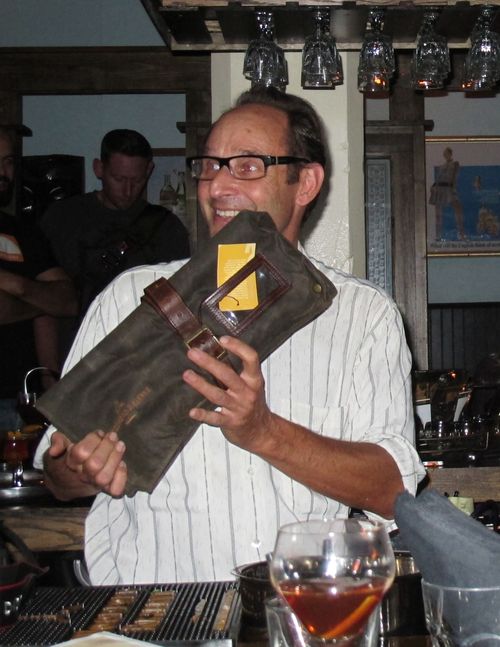 Stirred and served up, garnished with an absinthe-pressed candied orange peel and brandied Balaton cherry.