This post was sponsored by PAMA Pomegranate Liqueur but written by me.

PAMA Pomegranate Liqueur plays up its versatility as a cocktail mixer, so let's do a cocktail thought experiment to see how it fits into cocktails from day to night.

PAMA is a bit unique for a liqueur in that it is both sweet and sour, so you can't always swap it out 1 for 1 with another liqueur. In fact, as they recommend on the website, to add PAMA to a base cocktail that has a sweet and sour element, all you need to do is cut back on your base spirit by half an ounce, add PAMA, and leave the sweet/sour balance as it is.

But not all drinks are sours. Let's think about how PAMA might (and might not) fit into drinks throughout the day.

PAMA's Take: I was looking through the recipes on the PAMAPros website, and well, most of the drinks I've theorized are already there, including this version of a Ramos Gin Fizz where they left out the gin entirely. 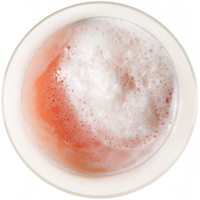 Method: Combine milk and egg in one half of a Boston shaker and all the ingredients except club soda in the other. Shake without ice for 15 seconds, add ice and shake vigorously for 45 seconds. Strain into chilled glass and top with club soda.