The Difference Between a Shrub and a Switchel

I received the new cocktail menu from Brandon Wise of Imperial in Portland, Oregon and noticed that it has the following drink on it:

The last ingredient was described as, "House-made switchel, also known as swizzle or haymaker’s punch. A long forgotten ingredient, Wise’s nostalgic resurrection of this carbonated cross between sweet tea and apple cider is an appreciated addition to Imperial’s ingredient list."

So, a switchel sounds a lot like a shrub, a (usually) fruit-and-vinegar syrup. I followed up with Wise to ask him:

What's the difference between a switchel and a shrub?

There are many commonalities between switchel and shrub. The main difference is the role of fruit(s and veggies): shrubs, speaking in a general sense, are a way to preserve fruits of the season with vinegar. The switchel we make also incorporates vinegar, apple cider vinegar specifically, but does not rely on fruit for its flavor. Molasses, cider vinegar, and ginger are the key flavor agents in our switchel whereas in a 'strawberry shrub' (for example) the strawberry is the primary flavoring agent which is then effected by the vinegar. Switchel is a little closer to a root beer, ginger beer, or traditional ale.

Another fundamental difference is that our switchel is itself a drink, not an ingredient in a drink. Shrubs are delicious when you add water or soda but operate more as a syrup or sweetening agent; our switchel is meant to be consumable on its own. We bottle condition with yeast much like we make our tonic water for natural carbonation. The goal was to make something like a sarsaparilla rather than a syrup. Switchel, like tonic, can be carbonated or uncarbonated, we simply choose to do it this way.

We're very excited about this product and are pleased to see folks trying it for the first time and loving it. The cocktail on our menu that features switchel was an immediate hit and has become one of our best sellers. To my knowledge we are the only ones using it for cocktails and that is pretty exciting. It was something we stumbled upon when doing research for the Portland Penny Diner and its soda fountain component and have long desired to incorporate it into our beverage program. We've sat on the concept for almost a year until the season was right, and now we're seeing that our patience paid off. Resurrecting a quintessentially American beverage was our aim and our patrons are very much enjoying the fruits of that labor.

I'm no historian or scientist so my answer may still be lacking, but hopefully a bit of the back story and its application can at least clarify its intent and its differentiation from a shrub. 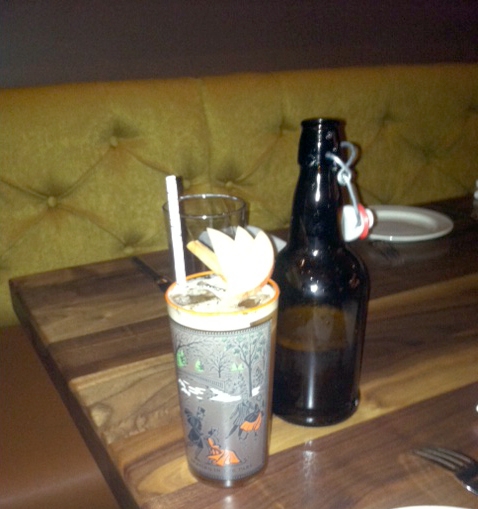 Switchel in the bottle and the Slings and Arrows cocktail

Amazing! Makes me look forward to experimenting with some switchels!

That's a great description. You may also want to take a look at a new Switchel vodka from Boggy Meadow Farm, currently only available in New Hampshire but on its way West...