How the pH of Lime Juice Changes as it Ages

This post is part of a mini-project looking at sweet and sour elements in cocktails, sponsored by PAMA Pomegranate Liqueur.

In recent years, bartenders have discovered that lime juice for cocktails tastes best not when it is first squeezed, but several hours afterward, typically something like 4-6 hours old.

I believe it was Dave Arnold who first discovered this. He was testing whether limes juiced in a machine versus hand-squeezed were better (hand-squeezed won), and also found that 4-hour-old juice from both squeezing methods tasted better than fresh lime juice from either method; a fascinating and completely non-intuitive bonus. Since then, I've heard of other people testing and confirming this.

One observation Arnold made was, "Some tasters commented that  that the aged juices not only tasted better, but had more of an acid bite."

So I thought I'd see what happens to the pH of lime juice as it ages.

Testing the pH of Lime Juice as it Ages

I started with two batches of limes. The Good limes I purchased that day. These were large, plump, and relatively good-looking limes purchased in California. (Not sure where they originated.) They tasted bright, sour, and floral.

The Janky limes I had purchased about 5 days earlier. They were small and in bad shape when I bought them, and only got worse while waiting to start the experiment. They had lots of high notes, were not nearly as aromatic/floral, not a full round flavor; just a simple acid/lime flavor. 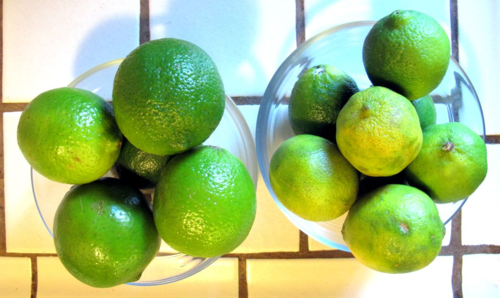 Good limes on left, Janky on the right

Then I squeezed both limes in a hand squeezer, filtered them through a fine strainer to get the large bits out, and measured their pH values over the course of two days.

I'd say my pH meter readings are only accurate to around .03 or so.

Looking at that as a chart, we have: 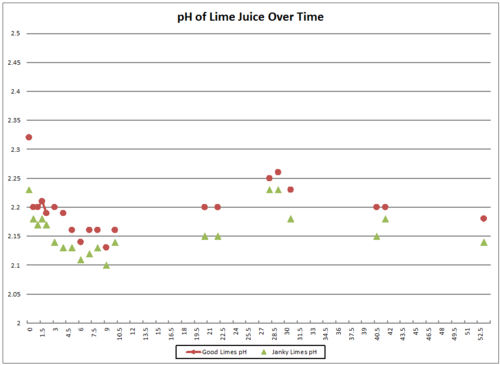 Click to pop out the chart or launch it in a new window.

Note that our scale is only from a pH of 2 to 2.5, so this isn't a big change in pH over time. I wouldn't be confident in saying that we could make any firm conclusions, so we'll just call them observations from this one experiment.

Now if we blow up the first 10 hours of measurement: 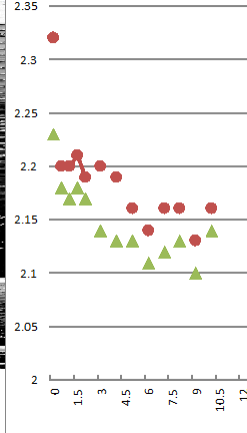 Overall, it appears in this experiment the lime juice became slightly more acidic after the limes were juiced, which agress with the quoted observation from Dave Arnold.

From a cocktail perspective, it seems your palate would still be a much more finely tuned instrument to measure the perceived or correct acidity of lime juice over time than a pH meter.

Other factors known or suspected to impact the flavor of lime juice as it ages include:

This is awesome. And I think I might know why, too.

Upon juicing, the juice is now freely acted upon by aerobic bacteria. Citric acid is the basis for the Krebs Cycle (otherwise known as the citric acid cycle) which is an enzyme catalyzed chemical reaction of citric acid to, eventually, oxaloacetic acid. I won't go into the details because, honestly, I'm not very versed in it because that's partial biology and that's weird stuff. What is interesting to note is the pH of the intermediates. Cis-aconitic acid, at high milliMolar concentrations is about 1.55. Ketoglutaric acid is 2.55. Fumaric acid is 2.56. Malic is 2.97.

Or I could be completely wrong. Either way, awesome article and now you've got me thinking.

Do you think that the cycle would continue with ambient aerobic bacteria providing enough of the requisite enzymes?

Should do. pH will even out (as noted above after 6+ hours) as the cycle reaches equilibrium. The rise in pH could be an increase in the oxalacetic acid (which has a modest 5ish pH) concentration or just a statistical blip. Since it's a pretty self renewing cycle (provides energy to resynthesize lost enzymes, sustain the cells, etc.) it should go on until you add something to kill them, like heat or alcohol. But I'm a chemical background, not a bio background so there's probably a lot in there that I'm missing.

Does the cycle occur, or even without knowing about the cycle, does immediate refrigeration slow down the ph breakdown? Or does it happen at the same rate?

Well I am not sure we want to slow the pH reduction since taste tests show that it improves. And over the course of 2 days bartenders would not want to use the same juice, even though the pH seems to even out rather than lower further.

I think (and I'm going to add this into the post) that other factors like oxidation play a bigger role in changing the flavor profile of lime juice as it ages than pH.

Great study Camper! I wonder how significant a role temperature plays in the pace of degradation. Mojitos in Cuba are usually partly pre-made with lime juice, mint and sugar sitting out at Cuban room temperature melding for up to 30 minutes.

to take this further i'd say we need to get away from language like "better" and strive to describe the changes in sensory terms. there are also two processes at work that can be isolated.

the first change is enzymatic while the second change is due to oxidation. enzymatic bittering can be isolated and separated from oxidation by using either a vacuum solution or a pressure solution (reflux de-aeration). then you can see which of the two processes has a bigger effect on subtle changes in pH.

beyond those gustatory changes are dramatic changes to aroma. lime juice has a distribution of olfactory-sweet aromas and acrid-olfactory-acid aromas. we non-linguistically categorize these aromas in terms of gustation and that is often called sensory fusion. so there can be changes that have no significant bearing on pH but due to sensory fusion, have a big impact on perceived acidity.

if we have a distribution of aromas that converges with gustatory divisions and produces all sorts of overtones (like a timbre), time develops those overtones and pushes the ordinary into the extraordinary. more time destroys it and reverts it back to another ordinary state (pine-sol).

"...I think (and I'm going to add this into the post) that other factors like oxidation play a bigger role in changing the flavor profile of lime juice as it ages than pH."

As more of the stuff in there oxidizes, the less 'sparkle' the juice has on the tongue. The juice starts to taste flat and lifeless after about 6~ish hours.

What is interesting, to me at least, is you can take 'flat' lime juice, squeeze in a couple of fresh limes and liven it back up considerably. Not that I am encouraging anyone to keep juice for more than a day, I'm just saying if you juice about half of your limes in the morning, and then the other half closer to opening time you can get the best of both worlds.

I didn't know you could liven up old lime juice - thanks!

Thanks for this. When I ran similar tests, I got similar results, though the change was less significant for me. I suspect the pH decrease comes from increased CO2 dissolving into the liquid, though I have no way of proving this. I'm assuming you stored the juice in sealed containers? The difference in our results may be related to headspace on our respective containers.

The academic literature on this topic is scarce, mostly because the industry cares more about pH changes over long periods of time, not fresh-squeezed. A similar trial run in the paper "Ascorbic acid content of commercial fruit juices and its rate of loss upon storage" found that Ascorbic acid levels start decreasing after two days.

I left mine in a glass out on the counter so there was most definitely more headspace in mine and increased opportunity for air and heat influence rather than a real-life bar storage situation.

You may want to make sure that you measure the PH at the same temperature in every case. I was working with a winemaker last week, and caught a conversation with her husband mentioning that the PH meter they were using is only very accurate within a specific temperature for the wine. (as they were controlling the results after malolactic fermentations).

Knowing that they make (expensive) wines for a living, i am guessing that their tools are not necessarily entry level ones.

You may want to discuss this with a scientist, as this is out of my league!

Yes from comments on Facebook I realized that I should control temperature better if I repeat this experiment in the future. There were times when my apartment was (a little) hotter or colder which could account for some fluctuations.

What is the time unit? Like seconds, hours, minutes?

Can you share your method for checking ph? How often do you calibrate if using electronics?

Also any equipment you use, so I could look up the accuracy of. Including vessels etc. thank you!

Hi - I just bought a pH meter off Amazon, and calibrate it with pH solutions. I wouldn't take it for gospel, it was a one-time home experiment, not controlled for temperature. Room for improvement for sure.