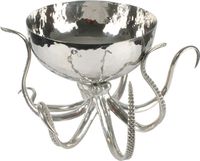 Octopus Punch Bowl - I haven't forgotten about this punch bowl since I saw it at Bellocq in New Orleans a couple years ago, and then Imbibe magazine had a picture of it in their November 2013 issue. It's available on the VagabondHouse website (for a mere $2640) along with a whole bunch of other cool octopus stuff.

Cynthia Rowley Flask Bangle - For a mere $365 you can have a bracelet you can drink out of. It's so obvious that nobody would think to check your jewelry for contraband liquor at any event for which a giant bulbous gold or silver bracelet wouldn't be out of place (I'm thinking that football games might not be a smart choice).

Bev-Cam Flask - Hide your booze in a fake digital camera, since you only use your phone for photos anyway. It holds 5 ounces, which is better than most. And it costs $14.97. Buy it here.

Tampon Flasks - Hey, you have a niece in college, right? That's about the only person for which this would be an acceptable gift, and even still, no. More info on Amazon here.

Tumi Mixology Backpack - I don't suppose there is any bartender or liquor carrying case that is perfect for everyone. I've yet to see one that was perfect even just for me. But this fancy ($695) backpack from Tumi is rather glam. You can get one at the Tumi site here.

Vermouth Refrigerator - Okay technically it's a wine refrigerator, but it would be so much cooler if you only used it for vermouth, don't you think? Free shipping from Amazon here.