I've been bursting waiting for the Saveur 100 issue to come out so I could write more about Gamsei, a bar I visited in Munich this fall and included in the January issue of the magazine.

The story is now online at Saveur.com, with a lot more info below. 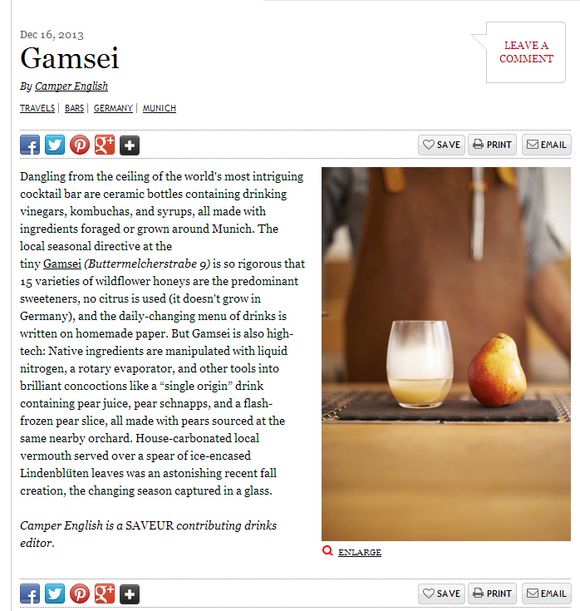 Gamsei comes from Matt Bax, the founder/co-founder of Der Raum and Bar Americano in Melbourne and Tippling Club in Singapore.

From the write-ups of Gamsei, it sounded like a place with a lot of rules (you have to wear slippers inside, no sugar in the drinks, no photos allowed) but much of that was either incorrect or more like a general policy than a rule.

The seating in Gamsei is on bleacher-style steps on either side of the central "bar", which is more of a low counter like you'd find in a science lab. Those slippers are for people who sit on the upper levels, so their muddy/wet shoes won't drip on the people below them.

I had also heard all about the hyper-local vision of the bar but not about the high-tech aspect of it. I was expecting a simplistic Japanese take on in-season cocktails, so the rotovap and liquid nitrogen came as a pleasant surprise.

Really, what Bax has done is just taken the idea of preserving local bounty and given it an exciting update. The bartenders forage in the forests (he said he checks with a plant expert to make sure certain things aren't poison before using them) and buy stuff at farmers' markets in season and use them fresh or preserve them using old-world techniques like fermentation, syrup-making, kombuchas, drying, etc. as well as new-world techniques like running infusions through the Rotavap so that they never spoil and flash-freezing other ingredients with liquid nitrogen.

As mentioned in the story, my favorite drink was the Lindenbluten, a local "lime blossom" (not the citrus tree) leaf and flowers frozen into an ice cube, and that ice cube used to chill and flavor house-carbonated local vermouth. Simple, elegant, beautiful. (But a terrible picture, sorry.) 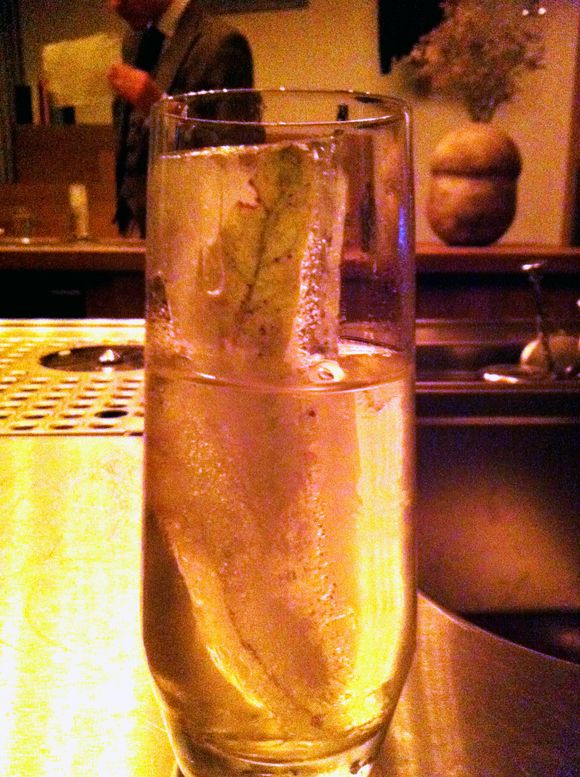 At service, you get a mix of simple-looking drinks as well as some of the tricks you might expect from Bax - liquid nitrogen, beer foam, a drink in a flask. I had one that came with a a puff of cotton candy ("candy floss" to our European friends) that you use to sweeten a cocktail made with caraway liqueur, brandy, and riesling.

That puffy thing is cotton candy that you add to the cocktail to sweeten it.

All-in-all, the philosophy isn't that complicated and the rules aren't that strict. It's a unique set-up for a cool bar concept. Absolutely worth a visit when you find yourself in Munich. (And Munich is pretty darn worth a visit on its own- I've gotta get back there soon.)

Here's the menu from that day: 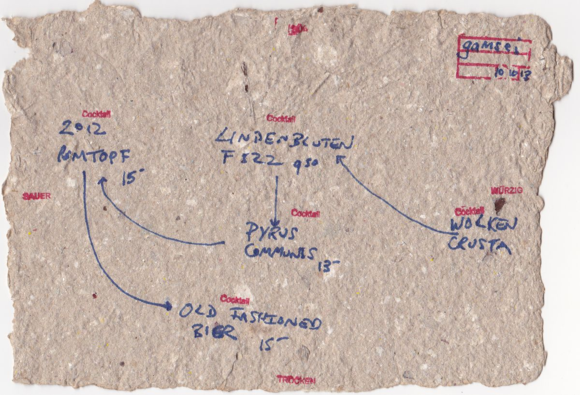 The arrows direct you from lighter starter drinks to richer heavier ones.

For those heading to Munich to see the bar: Gamsei has closed. Allegedly it's going to reopen in Australia. Might have been a bit too advanced for the Bavarian taste buds. "Der Zeit voraus" as we say here in Germany.

Munich is still worth a visit though, as mentioned above.

Bummer! I'm glad I had a chance to visit. And now I have another reason to go to Australia...