How Much Sugar is Added to your Rum?

It's a funny thing about rum: It all is distilled from a fermented sugar cane derivative (fresh cane juice, molasses, or something in between), but sugar doesn't pass through the distillation process, so some producers add sugar back into the distilled rum to sweeten it up.

Recently on Facebook, people have posted lists of sugar levels in commercial brands of rum. One reportedly comes from the Finnish government and another from the Swedish government. I won't post them directly here but the lists are here on RefinedVices.com.

You should really take a look. They show commercial brands of rums with anything from 0 grams/liter of sugar added up to 46 grams per liter.

**Note - You should verify the content against the originals. The Swedish government's site is: http://www.systembolaget.se (thanks Magnus!) and the sugar content is listed for some individual products. I don't know about the other list so I can't verify its authenticity nor how current either of the lists/measurements are. Furthermore, I do not know if the rums we get in the US are the same as in other countries, even if the labels match.  In other words, do not treat those lists as absolute truth.

But how much sugar is that really?

Allegedly, specific bottlings of rum by brands including Plantation, Bacardi, Zacapa, and Angostura contain between 17-22 grams of sugar per liter. This looks to be the average amount of sugar added by those brands that add sugar. Other brands are either much higher (40 g/l) or quite low (5-9 g/l).

So I wanted to know how much sugar is 20 grams and how sweet that makes a liter of liquid taste. So I measured it. My scale isn't the most accurate thing in the world, but here's how 20 grams came out: 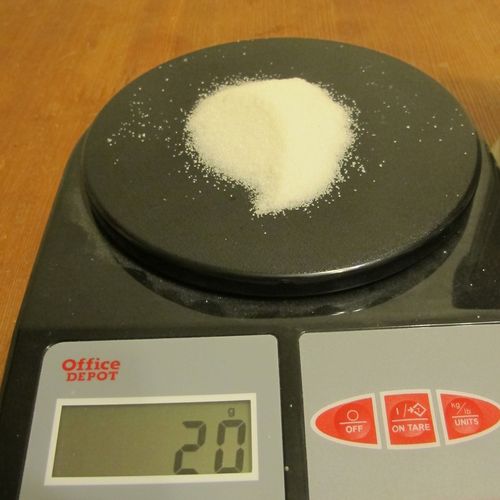 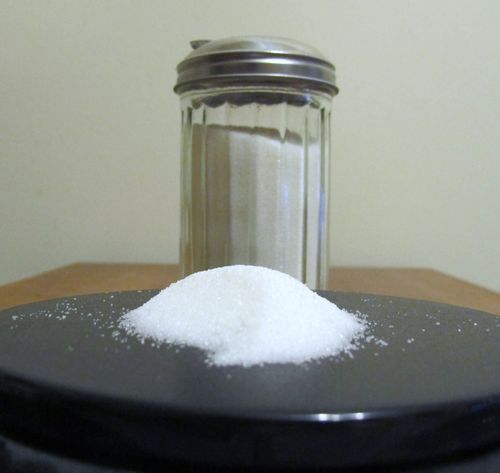 Which comes out to a heaping half ounce, or probably a little under 3/4 ounces. 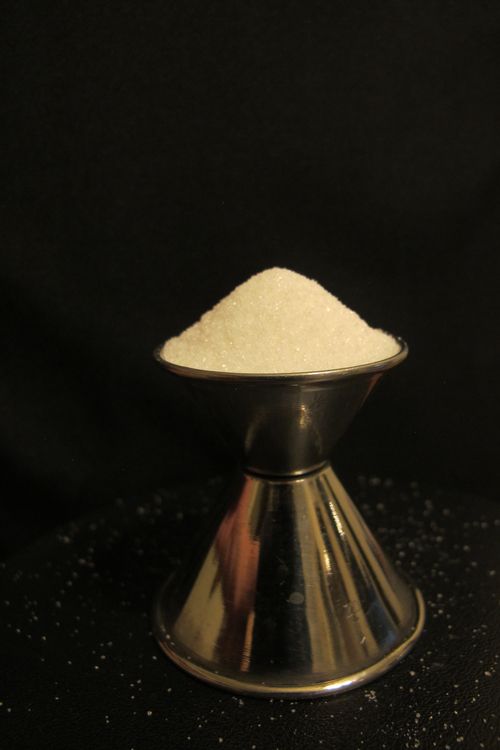 Heck, it's not uncommon for there to be that much sugar added to a single cocktail. And keep in mind that's the quantity for a full liter of rum, not 750 ml bottle.

I then added the sugar to 1 liter of water to see how sweet it was. In water, it was certainly noticeably sweet, but not soda-sweet.

For example, the driest soda I can think of is Q Tonic's grapefruit, orange, and lemon sodas. They have 13g sugar per 8 ounces, which by my calculation means 55 grams of sugar per liter; more than twice as much as is these rums.

I'm not saying that you want your rum as sweet as Coke, nor you necessarily want any sugar added to your rum at all. But for these rums having what sounds like a lot of sugar added to them, it's not really a ton.

So per ounce of rum you could actually be getting .025 ounces of sugar. Holy Hell!

a useful way to help think of the sugar is to convert those g/L measures to volumes by considering sugar's density. sucrose is 1.587 times more dense than water. so we can divide the gram measure by 1.587 to find the dissolved volume. 30 grams of water is 30 mL but 30 grams of sugar is 18.9 mL.

this can then help us find the starting alcohol content if we want which here is no big deal but is really useful when you scale the density/volume idea to understanding/reverse engineering liqueurs.

I don't see any of these sugar contents as a problem. there are likely no regrets or missed opportunities at hand. sugar can enliven aromas at certain levels where it is referred to as a flavor enhancer and acts by changing the threshold of perception of aromas; so it helps you smell more.

no one knows enough about sensory science right now to say that these sugar contents are inappropriate or represent wrongful manipulation.

at low levels, many of these sugars contribute color, often extraordinary color which generates extraordinary aromas when we consider that aromas are in part illusion generated by recollections, in this case primed by color. I do suspect that some budget spirits are over colored to become the equivalent of "grape-drink".

some rums also have so much aroma crammed in them that they louche, but I don't really know the ins and outs of this. intense coloring might cover up hard to understand loucheing that would negatively impact consumer perception.

then on top of it all, there is the spirit's acidity that needs to be considered, but no one seems to really know a lot about the topic specific to rums because of their diversity. some rums could take on acidity that needs contrasting via sugar to be enjoyable as an after dinner sipper. or maybe because they don't have significant acidity they need the sucrose to enliven them so they don't seem "flabby". beverages likely need one dominant attentional gustatory feature for us to latch on to and that is acidity or sweetness.

to stay optimistic about why sugar is there, I would say its not there to "sweeten it up" but to rather to interact with aroma or as a byproduct of color you'd probably miss if it was gone.

Ever the aromatic optimist, you are! Actually you covered part of tomorrow's post, which talks about some of the reasoning for adding sugar to rum (but in less fancy terms).

But yeah, the internet went ballistic over these reports of sugar in rum - and I think that's appropriate as I've never encountered a brand that admitted to it. So my goal was to visualize just how much sugar that is to see if it was unreasonable. It's not, but it's also not cool for brands to be deceitful about it.

I like a certain amount of deceit in my spirits, it is tradition.

one thing we could try is putting hydrometers in the bottles and seeing how far off the printed alcohol content they are then try to explain the gap which would be mostly due to sugar.

I think the sugar issue is a sensory science issue and no one knows enough about the subject. I've grappled with it for a long time and read countless books. it covers multiple parts of so many people's expertise that I dont' think you could get any single person from Monell to tell you anything elegant and intelligent.

one of the greatest books on spirits is by Hurst Hannum & Robert Blumberg:

they were motivated to write it because they saw the spirits world changing and the rise of the marketing company. actual distillers were prevented from speaking because they were all the sudden in charge of products worth hundreds of millions of dollars so everything began being filtered through often clueless PR people in a game of telephone. it is the best depiction of calvados, cognac and armagnac I've ever seen and I remember it spends time explaining the allowed additives to each, circa 1976.

Hannum & Blumberg both went on to become big international lawyers and I've always wanted to get them to speak about their spirits adventure. they were both so far ahead of their time.

Oops, I meant that the list is probably compiled from the monopoly website - but not all products have info on sugar amount.

Amusingly, the Finnish state liquor store is called "Alko". They also have a bitchin' logo. http://www.alko.fi/

After a quick look through some of the lists, it seems to me that many of the zeroes on the lists are for rhums agricole. If that's true, and not just due to an oversight on my part, it leads to a question: do the guidelines for rhum agricole manufacture forbid the addition of sugar? I haven't been able to find this specific info in a quick Google search. I just thought some more knowledgeable folks on her might know the answer to this off the tops of their heads.

I don't recall offhand but after this discussion I'm thinking it would be worth me collecting a list of rules of rum production from various countries if that's not already assembled somewhere...

Well alrighty then. Thanks!

What a coincidence, I was just talking to someone about this! Great to hear rum has so little sugar.

I do wonder, why is perfectly good rum made stupendously sweet by adding the sugar? Because it is not sweet at all straight from the cask - just as whisky is not. Someone made an interesting point also: In cognac, it is the young, less expensive cognac's of lesser quality that typically are drowned in sugar (which means 18 g/ litre at max). But in rum, we see many so-called "super premium" rums with a lot of sugar - and yes, I would say 45 g / litre is *A LOT*, as it really makes it taste excessively sweet (try Zacapa, Zaya, Diplomatico 12, Angostura Cask no 1, Pyrat, etc etc).

Personally, knowing that sugar is not the only thing most big brand rums contain as "additives", I would challenge this type of practices somewhat: Why? Is the distilate so poor in quality that sugar and other "stuff" is really necessary? (Fortunately we have at least a handful of independent bottlers who offer more natural rums.)

Hi Mika - can you tell me what other additives are added to rum besides sugar, and what their purpose it?
Thanks!

glycol (sweetner/"mouth feel"), caramel colors, occasionally salts(flavor enhancer), and non-cane sugars within GRAS so they don't have to be labeled.

Alas, www.systembolaget.se doesn't indicate sugar content in rum now. But www.alko.fi is holding on. By now.

Alas! Thank you for the update.