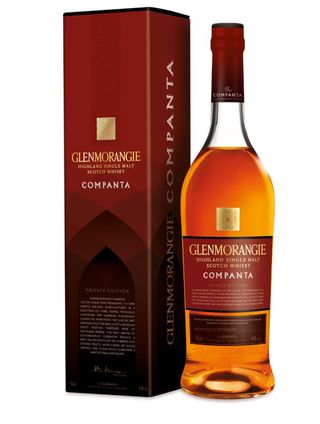 Glenmorangie Companta is the newest release from Master Distiller, Dr. Bill Lumsden. Part of Glenmorangie Companta (Scots Gaelic for friendship) had been matured in traditional American white oak ex-bourbon barrels, then was transferred into casks having previously contained Grand Cru wine from Clos de Tart. Another part was had been extra maturing in casks having previously contained a sweet fortified wine from Cotes du Rhone.

Extra matured in French wine casks, Companta is bottled at a strength of 46%, and non chill-filtered. Glenmorangie Companta suggested retail price is $99 and is available globally beginning January 9th until stocks are exhausted.

The BenRiach introduces four new expressions to the U.S. market

The BenRiach, meaning “The Hill of the Red Deer” in Gaelic, sits amongst the rolling barley fields that rise to the foothills of the Grampian mountains in the northeast Speyside region of Scotland. Acquired in 2004 by Scotch whisky industry veteran Billy Walker, The BenRiach is home to an inventory of casks that date back to 1966. Employing copper stills and using local Scottish barley malt, The BenRiach’s craftsmen strive to blend traditional practices with innovative cask finishes to create whiskies that are unique to the Scotch category.

The BenRiach Solstice 2nd Edition 17 Year Old (50% ABV, SRP $99.99) has been distilled from heavily peated malted barley before it is matured in ex-bourbon casks and finished in tawny port casks.

For more information on BenRiach or distribution, visit AnchorDistilling.com.

Don Sutcliffe, managing director of Craft Distillers and 35-year veteran of distilled spirits marketing, and Willie Phillips, for 23 years managing director of The Macallan, have collaborated to create a small batch Scotch Whisky. First in a series of releases is The Exceptional Grain, a blend of aged Scotch grain whiskies, selected from several different distilleries. While others blend to produce year-in, year-out consistency, each edition of The Exceptional Grain will offer a whisky that is individual.