I'm reading a bunch of books on malaria and quinine to try to track down the true origins of the Gin & Tonic. 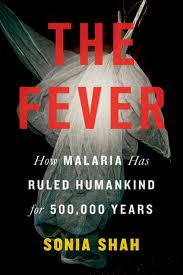 The Fever: How Malaria Has Ruled Humankind for 500,000 Years by Sonia Shah is the most modern book I have that tackles the issue of malaria.

The first chapter deals with how the parasite lives between the mosquito and humans and how it evolved over the years. The second chapter reveals the spread of the disease to the New World, in part assisted by the slave trade. In the next, the author looks at the ecology (mosquito habitat) of malaria and where and how that affected the humans in those environments from ancient Rome (which was particularly plagued - even the popes headed out of town in the summers) to America to how it spreads today when crops are changed to new monocultures and even the effects of global warming on the spread of the disease.

Chapter Five traces the cure from the Jesuit priests' discovery of quinine in the 1630s to transplantation in Java. Then through synthetic antimalarial drugs and malaria's resistance to them that built up within a decade or two for each one used. Then to the failure to effectively price and/or distribute treatment to the parts of the world where the drugs are most needed. This chapter might be the only one you need to read if you want a concise description of the first 300 years of quinine use.

A later chapter deals with how malaria was eradicated in The West, starting with the Panama Canal example that is in every book about malaria. Then it covers the use of DDT in more detail than other books and the campaign to use it globally, which succeeded in eradicating malaria in some regions but failed miserably in others. Next the book goes into the post-DDT modern world, explaining how AIDS causes more malaria deaths, the Bill and Melinda Gates Foundation, and other modern factors.

It is a very engaging book, but alas, it contains nothing about the Gin & Tonic.