I'm reading a lot of books about malaria while researching quinine and tonic water. So far, none of them have included more than a single sentence about tonic water. That's a little bit frustrating.

However, the story of the curse of malaria in world history, the discovery of a natural cure in Peru, the efforts to propagate the tree elsewhere, and then the understanding of the disease and what caused it (which came much later after finding a cure) are fascinating. The tale involves all the major political powers from the 1600s forward and every hot, humid climate on earth. 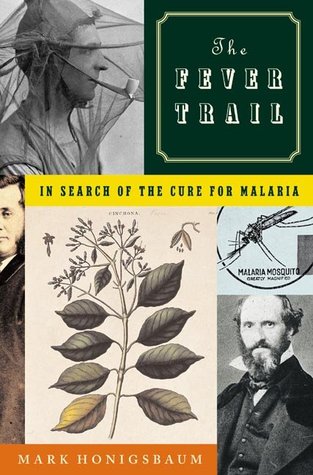 The Fever Trail: In Search of the Cure for Malaria by Mark Honigsbaum is an engaging account of  this search.

It's the second book I've read end-to-end on the subject. The first was Quinine: Malaria and the Quest for a Cure that Changed the World by Fiammetta Rocco, which I reviewed here.

I found Honigsbaum's book to be more entertaining and a better narrative. Rocco's book starts a little bit earlier in time (telling about the initial discovery of quinine) and goes into great depth in certain areas of history while skipping past others. Honigsbaum doesn't always stay in a direct timeline but sticks to where the good storytelling is. So I found it to be less linear but more enjoyable.

I have a few more books to read, and if any of those are worthy I'll be sure to let you know.