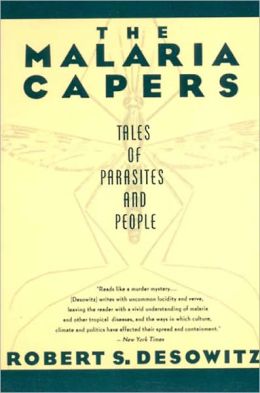 The first part of the book The Malaria Capers: Tales of Parasites and People by Robert S. Desowitz isn't about malaria at all but a similar disease kala azar. As my interest is in malaria (actually, quinine that treats malaria and ends up in tonic water), I skipped that whole first section.

In the first chapter of that section the author tells the tale of a woman dying in a small village near Burma. The next tells of the study of malaria in monkeys versus humans in the 1960s. The following talks about the history of the disease (in a chapter named "Mal'aria- The Bad News Airs") literally from the dawn of humankind. Then he tells about the history of the theories of the cause and the discovery of the real cause of the disease.

The next two chapters deal with the British and Italian scientists who figured out the mechanism of the disease. Then the author takes a step back and looks at disease treatment, from the first discovery in 1600s Peru through synthetic anti-malarial medicines. The remaining chapters deal with the search for a malaria vaccine. I skipped them because I know the conclusion: there's no vaccine yet.

I skimmed this book looking for relevant information that I didn't already know from reading two other malaria/quinine books but didn't see too much I was interested. However the writing looks quite entertaining. It's probably a great read, I'm just not going to read it.

Not sure if you have come across the above - will also send, as soon as I can find it again, a great paper from the Dutch that chronicles the trials and tribulations from 1850 -1900 of trying to grow the correct cinchona in Java.

Thanks - One of the books I read had a good short synopsis of gutting it right in Java by grafting. The real piece of the puzzle I'm missing is when the Gin and Tonic became a drink. We always see a reference to it but none of the malaria books have offered more than a paragraph on it. So I haven't yet been able to fact check that G&T began by british officers in India probably in the 1820s or so. I have only been looking in books so far so I have more research to do, but I better get on it quick as my story is due in less than a week!