From Mongolia comes Soyombo Vodka, a vodka produced by The APU Company, Mongolia's first national beverage company since 1924. Soyombo is produced, distilled, and bottled in Mongolia and is the number one selling super-premium vodka in Mongolia.

Soyombo will be launched in five US markets: California, New Hampshire, New Jersey, upstate New York and Ohio; as well as at online spirits retail site Caskers.com; and in Canada. The suggested price is $29.99 (40% ABV; 750ml).

Soyombo Vodka is distilled on the site of the last Emperor's palace, the Bogd Khan’s Winter Palace located in Ulaanbaatar, the capital of Mongolia. It is made with organic wheat from the Selenge Province on the Mongolian Steppes and water that flows from the Bogd Khan Mountains. It is distilled six times and then filtered over the course of five days through charcoal, quartz, diamonds and silver.

Soyombo Vodka is imported to the US by MHW, Ltd in Manhasset, NY. For more information about Soyombo Vodka, visit www.mongolianvodkas.com. 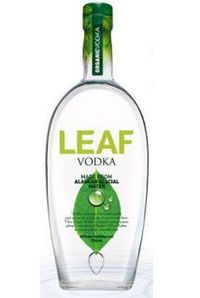 Global Spirits announces LEAF Vodka. Two varieties are introduced in the line—one made from Alaskan Glacial water, and the other, Rocky Mountain mineral water. The water sources give Leaf Vodkas their signature tastes.

Both vodka brands use the same base spirit (made from organic wheat grain). The difference is the water used to reduce the alcohol down from > 95% to 40% alcohol by volume. Both waters are filtered prior to dilution to remove impurities.

Certified USDA Organic LEAF Vodka is currently distributed in New Jersey and Connecticut with an SRP of $16.99 for 750ML.

From his first visit in 1957 to his final vacation in 1977, Evlis travelled to the Islands of Hawaii on numerous occasions to make movies and perform live musical shows.

Three Olives 'Elvis Presley' Coconut Water Flavored Vodka will be introduced in March 2014, with nationwide distribution available in all sizes and priced at $21 per 750 ml. In addition to 'Elvis Presley' Coconut Water Flavored Vodka, the Three Olives Vodka portfolio currently includes a variety of more than 22 flavors. For more information, visit www.threeolives.com.

Absolut Vodka unveils its eighth and latest addition to the Absolut Limited Editions portfolio with the launch of Absolut Texas – the brand’s first and only state-inspired flavor. San Antonio-based artist Cruz Ortiz designed the Absolut Texas bottle as a modern take on classic Texas iconography.

Absolut Texas is now available in 750ml bottles with a suggested retail price of $19.99. For more information visit www.absolut.com/texas.