Drink-By-Drink at The Coachman, the Former Heaven's Dog in San Francisco

The Coachman opened recently in the space of the former Heaven's Dog. It's from the same owners - Charles Phan of The Slanted Door. I went in to drink my way through most of the cocktails on the menu - and a few that aren't yet.

The space got an upgrade from the HD days, with a more open dining area and additional seating in a second alcove in the bar area. The space has always been dominated by the long bar carved from a slice of tree, but now it seems to allow more people to enjoy it.

Heaven's Dog was a much-loved bar so for its fans, the new drink menu will take some getting used to. But I remember when HD opened it took me a while to really 'get' the feel of the drinks - big, brassy numbers with lots of funky rum.

It seems that The Coachman, with John Codd at the helm of the bar program, has kept the funk but replaced rum with genever for its focus (though there is still a lot of rum). Three of the 13 drinks contain genever; plus another drink uses beer schnapps which is similar.

Let's go through the menu drink-by-drink, shall we?

This one should be the top-selling crowd pleaser. First off, it comes in a Moscow Mule copper mug with a fun cucumber garnish. Second, it's as drinkable as it sounds. 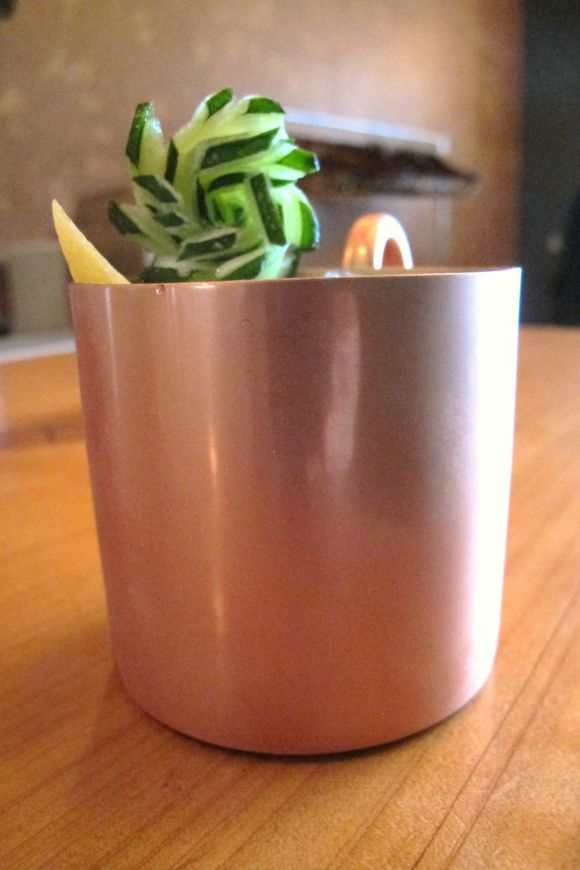 This drink was on John Codd's last menu at Wo Hing General Store, and it is really nice. The beer schnapps gives it a malty, genever-like quality to the vermouth-based drink. Clever and really good.

This drink has funky rum that comes through, soft brandy, a touch of sweet sherry, and a bunch of citrus. "Classical sherbet" is code for oleo saccharum, for those in the know, and that plus the splash of soda gives the drink a little tingling fizz. Really nice. 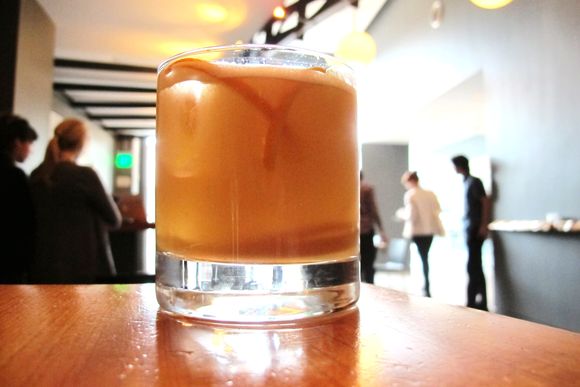 Both sweet at the start from the strawberry and dry in the finish from the sparkling wine/kina combination, this drink is probably a better food pairing than you'd expect. It's pretty refreshing and I'd even try it served in a tall collins glass instead. 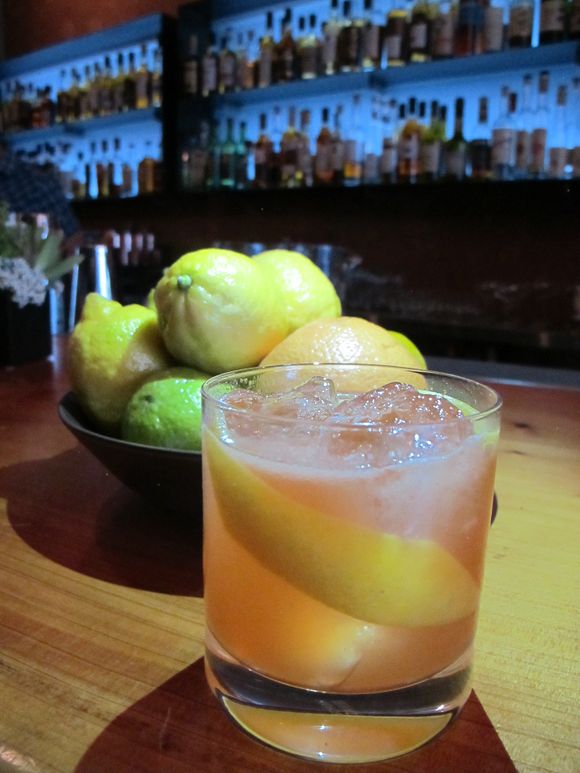 This drink is both familiar and exotic: cinnamon and genever together are lovely. The pineapple was roasted and pureed, so it's not a fresh pineapple flavor. It probably deserves some time to settle and dilute as all juleps due, so if you're a fast drinker this one might come on too strong. More zesty than you'd imagine from the soda water. The spiced wine ice is what it sounds, in a nice deep red color like a fresh beating heart (not that I've seen one in person). The drink changes as the ice dilutes, getting those wintery spices in the mix. A fun one to drink, and not as brainy as some of the others. Probably for your newbie cocktail friends this is the one to order after the Cider Cup. 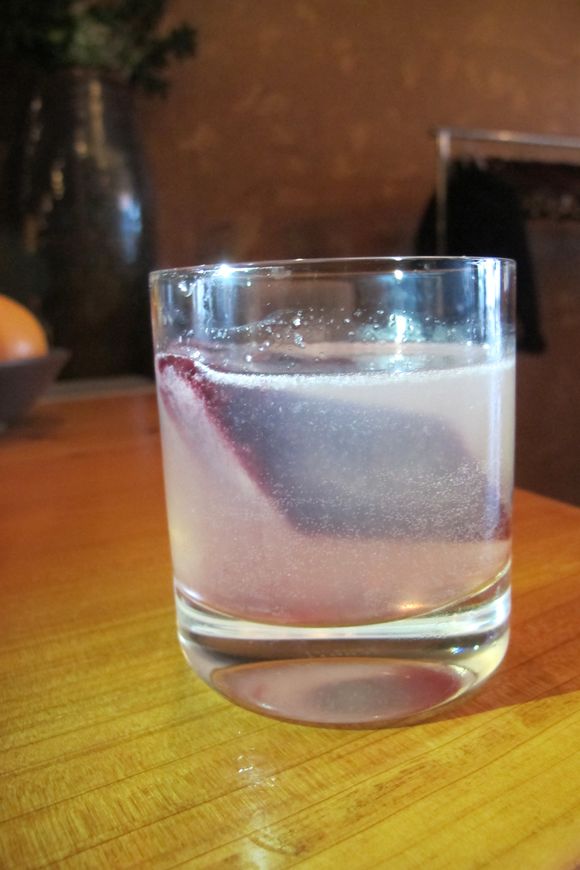 This one from Keli Rivers is both light in texture and bold in flavor; the combination of genever and Riesling. The "whole lemon" in question is a lemon cordial made from whole lemons rather than just the peel/juice. 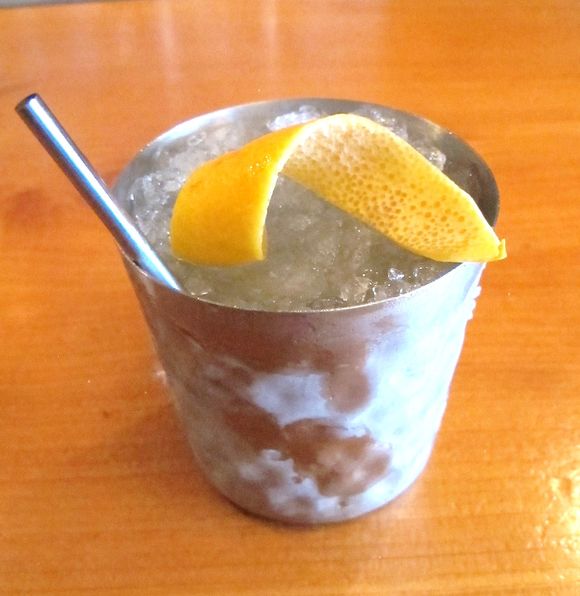 They've stepped up the presentation game at The Coachman, with julep cups, copper mugs, the above metal cup, and the flask for this drink. But the drink itself is very cool - it's just an infusion rather than a cocktail mixed to order, and there is no sugar added so all the sweetness comes from the currants. It has an oloroso sherry-like flavor to it. 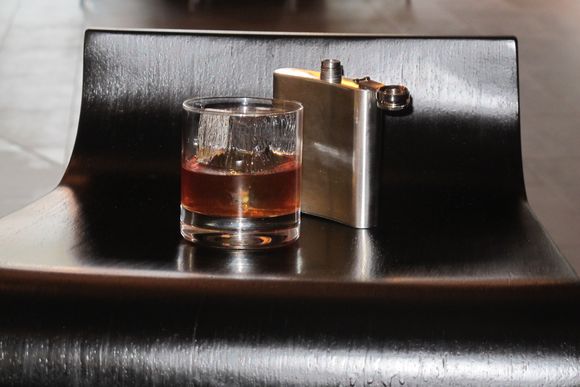 This cocktail is from Erik Ellestad, who has returned to his old post behind this bar. It has a nice Ovaltine grainy earthiness to it. It's not super heavy but if you're not eating and want to put something substantial/soothing in your stomach this is it. 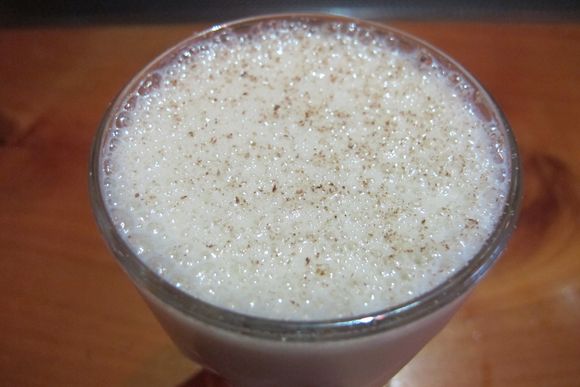 This is a rich, post-dinner of final-drink along the lines of a spicy Rum Manhattan. There's just a touch of the Chartreuse to give it that spice. The color of the drink is a beautiful deep red that I couldn't really capture in the picture below but I tried. 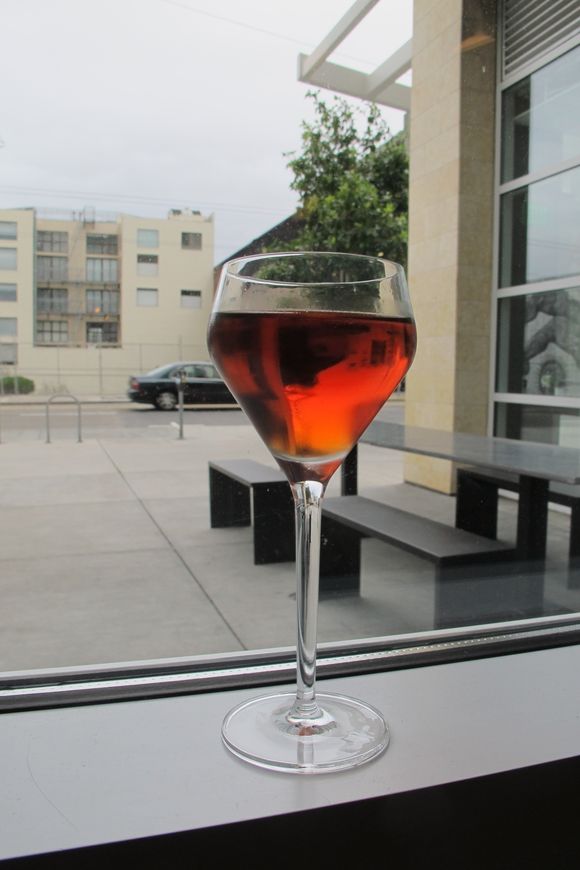 We owe this drink to Erik Ellestad, who has been making fantastic clarified milk punches since the days of the original Heaven's Dog. The booziness of the drink is hidden beneath the creaminess of the milk. A must try, if you haven't before.

Another import from Wo Hing that was one of my favorites there. All of these flavors come together wonderfully well.

Malty! I've tried a bunch of versions of Gin Cocktail with added dashes of maraschino, curacao, and absinthe. I can't claim this is my favorite formulation (I love absinthe) but it is definitely a hearty kick-in-the-pants, which is always nice. 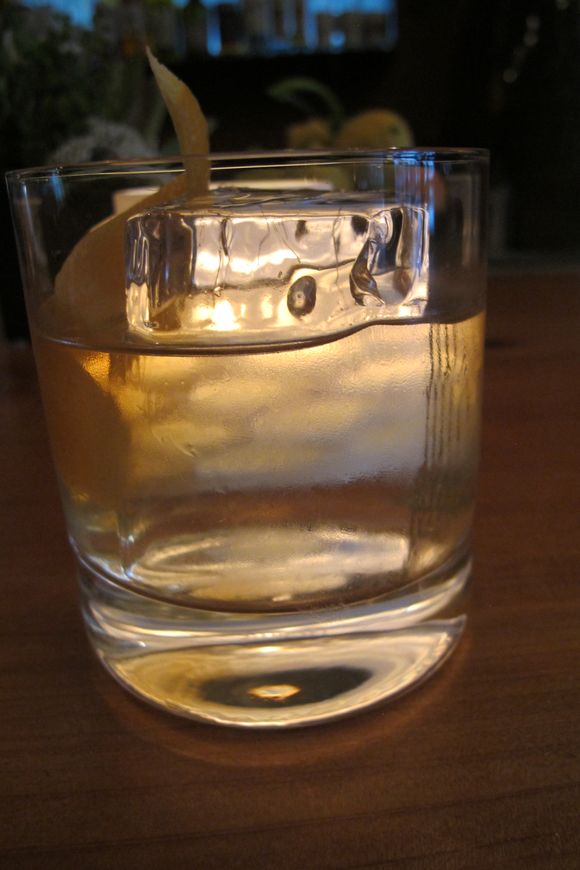 I also had a preview of a drink in development: A Clarified Last Word flight. The drink may very well change in the future, but the way I had it was with Green Chartreuse, clarified lime juice (clarified with a wine filter, so mechanical filtration I believe rather than other methods), and one of three gins from St. George Spirits.

The Terroir gin made the drink alpine-y; the Dry Rye finishes super dry; the Botanivore comes out super lemony and citrusy-sweet. Codd said that he wasn't sure in the future if they'd go for three different brands, three styles (genever, Old Tom, London dry), or something else. I liked this version.

The fun thing about clarified juices is that you can stir them in a cocktail, and Codd did using his spiffy 3-prong stirrer (and shaking a cocktail at the same time just to show off). 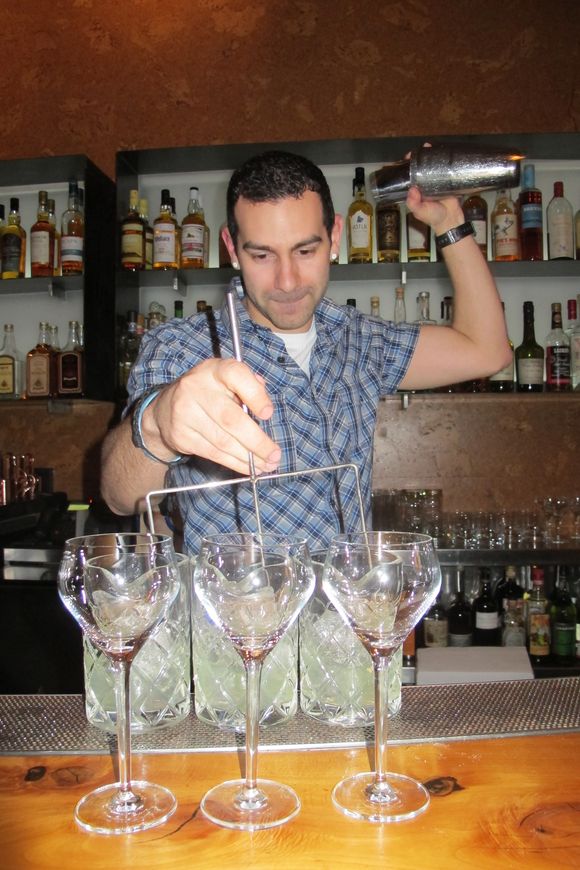 So there you have it. I am looking forward to once again spending far too much time at this bar.