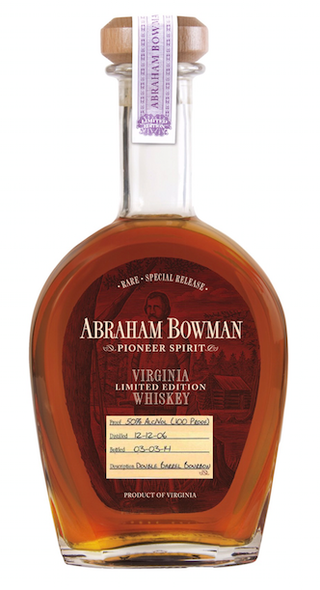 A. Smith Bowman Distillery announces the first release in its Abraham Bowman line for 2014, the Abraham Bowman Limited Edition Double Barrel Bourbon. This new bourbon was aged a total of seven years and two months.

Originally put into barrels on December 12, 2006, this bourbon was transferred to new barrels on April 17, 2013.  After aging an additional six months in Bowman’s standard Warehouse (A1), the barrels were then moved to the mezzanine of Warehouse K, and aged for an additional 5 months where they experienced increased air-flow and scrutiny.

The Abraham Bowman Limited Edition Whiskey Double Barrel Bourbon is part of a series of whiskies, named after Abraham Bowman, the commander of the 8thVirginia Regiment in the American Revolutionary War. Each edition of the Abraham line is a different expression and a new expression is released a few times a year.

The Abraham Bowman Limited Edition Double Barrel Bourbon is not chill filtered and is 100 proof.

A. Smith Bowman's distilling roots date back to the years before Prohibition when the Bowman family had a granary and dairy farm in Sunset Hills, Virginia. They used excess grain from the family estate to distill spirits. Considered a micro-distillery by today's standards, A. Smith Bowman produces an assortment of spirits. For more information on A. Smith Bowman, please visit www.asmithbowman.com