Home Books Blog Clear Ice Talks Hire Me About Search Contact
Regional Airline Mini-Bottles in Saveur
How to Carve Up an Ice Block, Tools to Use, and Making Clear Ice at Home

A couple of years ago now, I was quoted saying I was seeking "less perfect simplicity, more ridiculous fabulousness" in San Francisco's cocktails, no matter the cost of them.

I think we're seeing touches of that at places like The Coachman and Fifth Floor, but I still haven't got the over-the-top (and likely super-expensive) cocktail bar I am still hoping for. It's almost as if people don't want to build bars just for me. Weird.

But former San Francisco bartender Thomas Waugh created something close to that for the drinks at ZZ's Clam Bar in New York. All the cocktails are 20 bucks and some are garnished in metal pineapples or in a coconut piled on a stack of ice and leaves. They also have a raw bar, but the food comes from a small kitchen window.

For better drink pictures than mine below, check out Punch's story and photos.

The bar is tiny. This is the view from both ends. It seats less than 20 people, none of them in front of the bar. 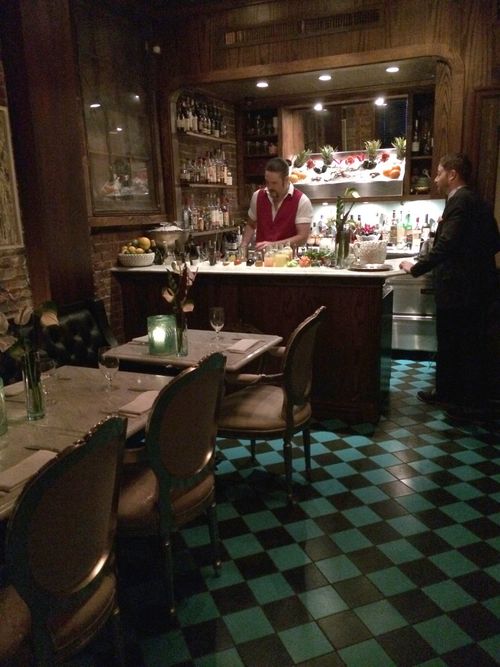 The bar set-up is decadent.  It looks like an oyster bar, as there is so much room between the bar top and the bartender, which is filled with ice and chilled juices and garnish.

The ingredients are decadent too. Bartender Brian Miller says when we was training with Thomas Waugh he couldn't locate the Chartreuse to make a Last Word variation and Waugh said, "Just use the VEP." 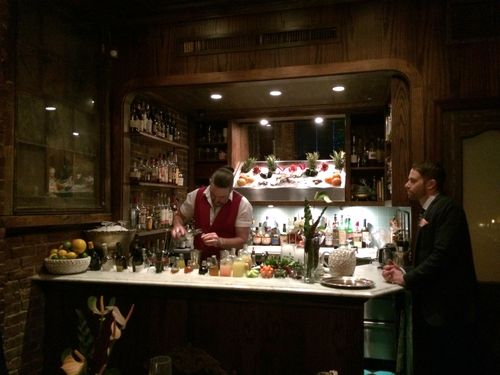 The drinks aren't too far out there flavor-wise: I didn't try anything I'd call challenging and nothing that I tried was the brown, bitter, and stirred cocktails currently all-too en vogue. The four drinks I sampled were all quite soft with tiki tendencies if not tiki drinks outright. 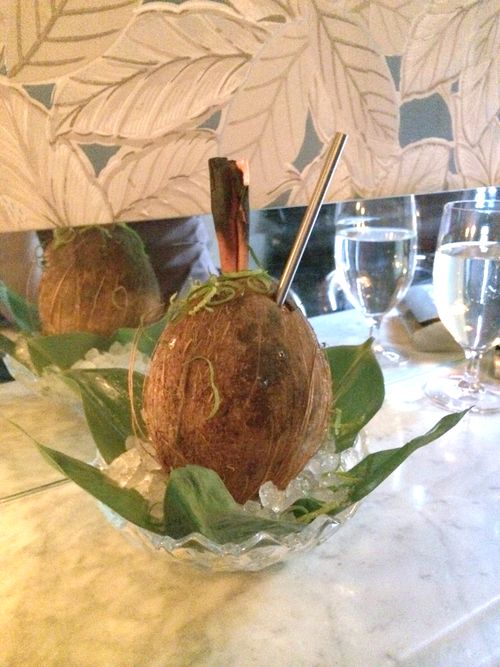 Not all the drinks were as fancy as the signature coconut one, but it provided plenty of eye candy for everyone.

In short: I like the concept a lot, and still wish someone would do a version of this in San Francisco.

I'm a big fan of ZZ's, and I think they're wayyy ahead of the curve when it comes to presentation. In all the talk of cocktail prep, ingredients, and technique, what I find is becoming increasingly lost is the mise en scène, that theatrical moment when all your anticipation becomes realization as a drink is set out before you. I'm a believer that the true secret ingredient for a world class cocktail is the perception of it in your mind--it's on that stage that the magic happens, and all too often a drink that arrives without ceremony fails to liven up that stage.

Word. The big garnish trend is huge in London and I want to see it more in the US. The casualization of cocktails is both good and bad.

Agreed about garnishes in the London scene, but having been there recently I have to say I wasn't terribly impressed with the actual drinks themselves. The Connaught Hotel was the most impressive (and expensive--20 pounds a drink!) and while I had a lovely time at 69 Colebrooke Row, I thought the menu skewed sweet. ECC was particularly disappointing given the affair getting in, especially since they were out of their two most innovative drinks.