This post is sponsored by Anchor Distilling, makers of Genevieve genever-style gin, White Christmas white whiskey, and other distilled products.

In previous posts, I took a look at how Anchor Distilling developed and makes their rye whiskeys and gins. Now we'll look at their genever, which is a whiskey-gin hybrid of sorts, as well as White Christmas, a white whiskey distilled from Anchor's Christmas Ale.

While gin has a neutral spirit base spirit with juniper and usually other botanical flavors are added, in genever the base is malt spirit more like whiskey.

At Anchor Distilling they take that literally, so

Genevieve is made in their two whiskey stills rather than in their gin still. Instead of fermenting a 100% malted rye base as they do for their three rye whiskeys, for Genevieve they create a fermented mash that’s a combination of wheat, barley, and rye malts.

They distill this beer once, then add botanicals and redistill it. Those botanicals are the same ones used in Junipero gin, in the same ratios as in Junipero. However, they use a greater quantity of them for Genevieve as those flavors must stand up against the malty whiskey base.

Essentially, they’re making whiskey the usual way, but also tossing botanicals into the still between the first and second distillation. However, they do one thing different from their rye whiskeys: they change the cap on the still to a traditional genever still shape.

When Genevieve was first released, I was invited to meet with then-owner and founder Fritz Maytag to talk about this new product. He told me that they took a trip to the genever-producing regions and toured distilleries and museums. He brought back a stack of books that he loaned me for a week or so, but it turned out that they were all in Dutch.

I asked Maytag, “Do you read Dutch?”

He replied, “No, but I can look at the pictures.”

And it was from the pictures that they had the genever-style still cap custom made for Anchor Distilling. When they produce Genevieve, which is only for a few weeks of the year (as the demand for the whiskey is so big and they use the same stills), they replace the whiskey still cap with the genever still cap to do so. 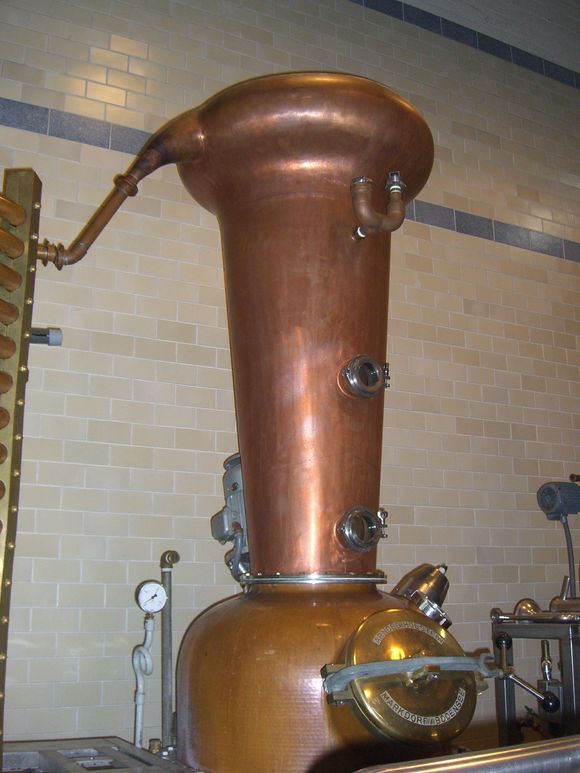 Genevieve is bottled at 49% ABV.

The newest (as of this writing) spirit made at Anchor Distilling is White Christmas, which is a white whiskey distilled from Anchor’s 2012 spiced Christmas Ale.

Every year for decades, Anchor Brewing has made a Christmas Ale with a different blend of added spices each time. (Maytag said that by the time they made Junipero gin in the 1990s, he was already very familiar with many different spices from making the Christmas Ale and that made it easier to put together.)

Head Distiller Bruce Joseph says they actually experimented with distilling their beer for years before getting it right, but in the end “We distilled it just like it was a wash for whisky.”

It may have been easier to distill than their rye whiskey though, as for rye the gummy fermented rye bits go into the still, while with the beer it’s only liquid, not the rye bits.

White Christmas was only available in California during 2013 and was bottled at 45% ABV.

What the Future Holds

Anchor Distilling is tiny: Three stills crammed into the corner of the brewery's basement, and not enough room to age their barrels of whiskey on-site. At one point the distillery was going to relocate to a warehouse across the street from the Potrero Hill brewery, but the amount of fireproofing and other structural work to make it legal were cost prohibitive- especially because they’re likely to move again soon.

Anchor announced a major new project, an additional brewery and distillery site on Pier 48 in San Francisco. It will allow them to quadruple beer production and they’ll still keep the Potrero brewery.

The press release states, “The new Anchor facility will feature production facilities for brewing, distilling, packaging, storing, and shipping; a restaurant, museum and educational facility in the headhouse of Pier 48; and a restored walkway around the entire pier apron that will connect pedestrians to the Portwalk and allow views into the Anchor brewhouse. Anchor will offer tours of the facilities and educational seminars with a focus on the history of craft beer, the art of craft distilling and Anchor’s history in San Francisco.”

This project will take a few years though, and in the meantime the demand for Junipero, Old Potrero, and other distilled products from Anchor continues to grow. To keep up with production, they’ve added a third distilling shift (five days per week) and are training staff to produce the product range day and night.

Joseph says, “You still can’t get around the size of the stills, which are small.”

This post is sponsored by Anchor Distilling, makers of Genevieve genever-style gin, White Christmas white whiskey, and other distilled products.