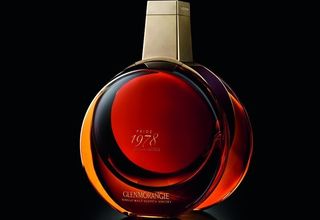 'Disappearing Casks' represents traces of the whisky barrels at Glenmorangie's distillery in Tain, the place where the single malt is created. It's these casks, five to be exact, which have been locked in Glenmorangie's archives since 1978. The 34 year-old liquid was bottled in 2012 following 15 years of extra-maturation in casks which had contained a French Bordeaux Premier Grand Cru Classe wine, making it the longest extra-maturation of any Glenmorangie single malt to date.

Glenmorangie Single Malt Scotch Whisky originates in the Scottish Highlands where, at the Glenmorangie Distillery, it is distilled in the tallest malt whisky stills in Scotland, matured in oak casks, and made by the 16 Men of Tain. The distillery was founded in 1843. Headquartered in Edinburgh, Scotland, The Company produces two main single malt brands – Glenmorangie Single Highland Malt Whisky and Ardbeg Single Islay Malt.