Notes on the Science of Flavour

Last week in Sicily I attended the Disaronno Mixing Star Lab. It was two long talks over the course of two days.

The first was called The Science of Flavour and it was given by food scientist Dr. Rachel Edwards-Stuart. 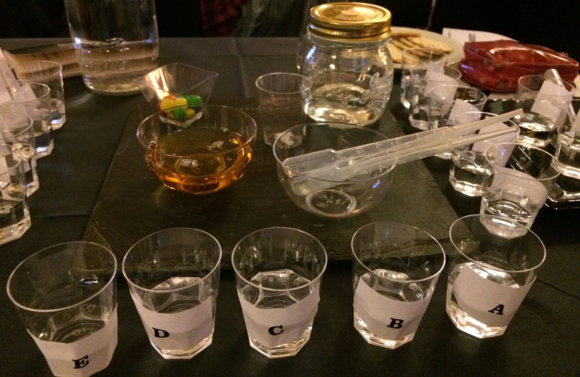 I took a lot of notes - and here they are:

By adding color to food (and drink) it changes our perception of its flavor. So a redder drink will appear sweeter. Green on a can of soda will make you think there is more lime in it.

Sugar and salt enhances flavor, so if you want to have something that you want to enhance the flavor you add that. So too does MSG and acidity.

Acidity as a flavor enhancer: If a food naturally has acidity in it, you can add more acid to boost flavor.

There was a study on mint gum – they found that the menthone stayed the same over time but as the sugar went away over time, you lose the perception of the mint. So you can dip mint gum in sugar and it will revive the mintyness.

pH shows sourness, but if sugar is present the perception of acidity will be lowered no matter what the pH meter says.

Tartaric acid you get in wine/grapes.

We did a tasting of pure taste solutions: sweet, salt, umami, acid, bitter. Then we all compared the intensity of them on a scale. It showed a huge range of perception of intensity of flavor. Also, it has been shown that people perceive intensity of taste differently on different days.

Lemons and limes – the difference in their flavor is due largely to their aromas.

Some countries in Asia have salty vanilla products, so they associate vanilla with salty rather than sweet.

We perceive aromas in the same part of the brain where we perceive memory.

With liquids, you don’t really get the aromas until you swallow. (That’s why wine tasters do that sucking thing.)

Trigeminal Stimulation – Everything that isn’t a taste or an aroma but is picked up in a chemical sensation in the mouth. Chile/spice, mint/cooling, carbonation.

Astringency is not technically a trigeminal stimulus (not in the same nerve/brain pathway), but we can categorize it similarly though it’s more of a mouthfeel. Tannins strip away proteins in your saliva.

Try ginger with a nose clip – it makes it taste way spicier as it enhances that trigeminal sensation.

Carbonation – bubbles bursting in the mouth activates mechanoreceptors. And CO2 turns into carbonic acid which activates pain receptors. It changes the balance of sweetness and acidity – that’s why flat Coke is so disgusting.

Research suggests CO2 increases bitter aftertaste and suppresses sweetness, but there is disagreement in the scientific literature.

Potato chips are put in noisy packaging to increase the perception of crunch and freshness.

The color of the plate affects flavor perception. Strawberry mousse on a white plate tastes sweeter and more intense than on a black plate. Serving something in a heavy bowl increases perception of density, likeness, value, and fullness vs a light bowl.

Music- When they played German music in a supermarket, people bought more German wine, opposite with French music/wine.

All 5 tastes are water soluble. (Because water and tastes are both charged.) So sugar is soluble in water but olive oil is not. (Sugar is charged and oil is neutral).

Alcohol will dissolve fat-soluble things as well as water-soluble things. So you get both taste and aromas trapped into alcohol. Makes it a great carrier of flavor.

The book Modernist Cuisine has tables of ideal infusion time/temp/substance for many ingredients.

You can use a centrifuge to separate oils, liquids, solids. Then use the oils for fat-washing into spirits.

In nitrous infusion in a whipped cream charger, nitrous is a neutral gas. In CO2 you get carbonation, plus the carbonic acid affects flavor.

Saltiness suppresses perception of bitterness, as does sweetness.

White chocolate and caviar contain the same aroma chemical – triethlyamine (sp?). They make an interesting food pairing. Use FoodPairing.com to look up interesting pairings based on chemistry.

MSG is probably not the cause of migranes; it’s something in refried rice when not prepared properly.

The Main Flavors of Disaronno (according to a trained flavor panel)

When you dilute Disaronno with water, keep the nutty flavor equal, get more fruity flavors. 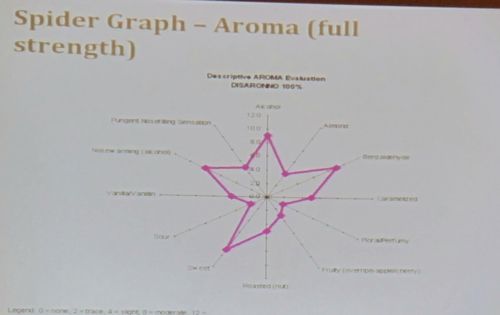 A mass spectrometer can only pick up 24 flavors in Disaronno. The human nose can pick up more. Some important ones for flavor pairings: 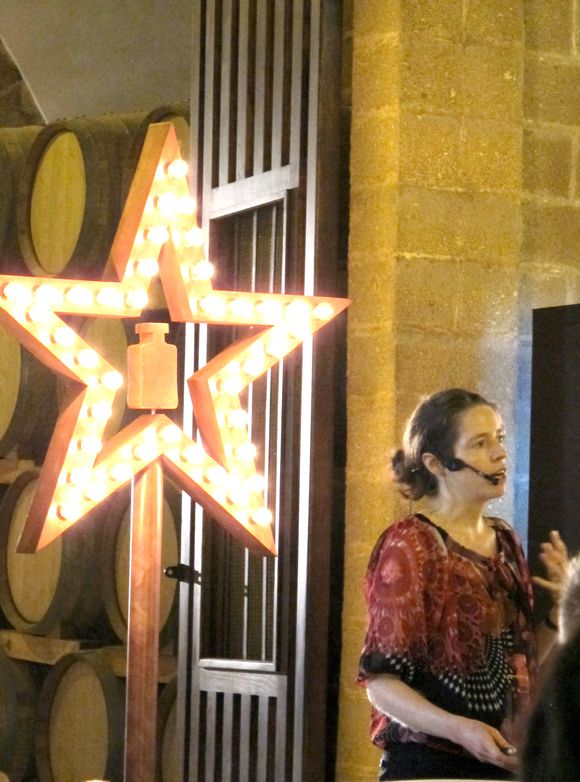