Last night I helped judge the Bombay Sapphire Most Imaginative Bartender competition for San Francisco. The winner, who was Brian Means of Dirty Habit, will go on to the national finals in Las Vegas.

My other judges were Marcovaldo Dionysos of Smuggler's Cove (representing the USBG as the technical judge), Johnny Codd of The Coachman, and Adrian Biggs from Bacardi. While Marco and I were sitting in front of the bartenders, Johnny and Adrian were judging blind from the back room.

These were honestly some of the most creative and yes, imaginative, cocktails I've ever tasted in a competition. I was continually surprised by how these bartenders used such bold-flavored ingredients with a subtle hand.

Brian Means was first up. His cocktail, inspired by the Britain-India connection, contained Bombay Sapphire, mango curry, lime, sherry, and egg white, and it was garnished with powdered Thai basil and flowers. It managed to be both big in flavor but nuanced on the curry - a very tough thing to balance. 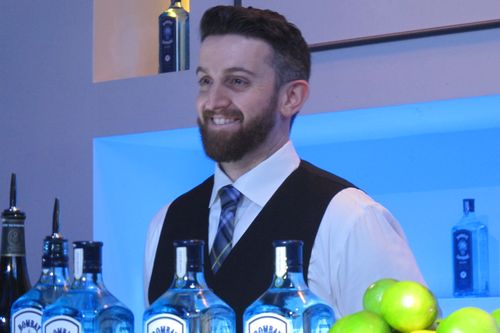 William Tsui of the Kanpai Lounge in the Hotel Nikko made a creamy cocktail with Bombay Sapphire, Bacardi 8 rum, green tea syrup, muddled strawberries, and half-and-half. He garnished the drink with mint leaves and ground juniper. 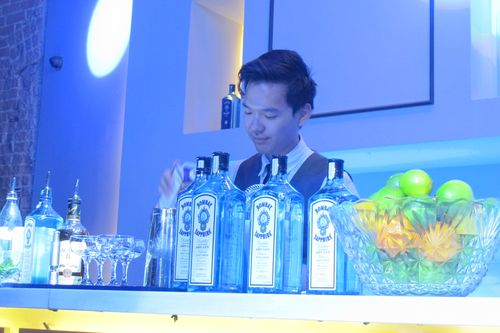 Max Alexander of Dirty Habit made an extraordinary drink inspired by the grains of paradise in the gin and his reflection on his idea of paradise. It contained Bombay Sapphire, Martini Bianco vermouth, a ton of grains of paradise to make it spicy, and "river water liqueur" that included things like nasturtium blossoms and crushed oyster shells(!). 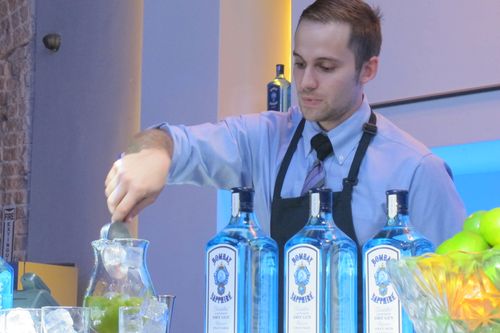 John Pomeroy of Bergerac (but mostly freelancing) made a drink inspired by the Martinez. In addition to Bombay Sapphire and lemon bitters, it contained clarified black walnut liqueur - which he clarified using a salad spinner as a centrifuge. The brown squigglies in the drink are not a baby octopus but walnut-chocolate truffle spheres, or at least they were supposed to be. The room was so cold the chocolate solidified so it became squiggles instead.

Anthony Parks of Bergerac made a mind-blowing drink inspired by deviled eggs - and it was as delicious as it was inventive. It contained a delicate balance of Bombay Sapphire gin, spiced mustard shrub, honey, lemon, and egg white, and it was garnished with lavender, dill, and cherry bark bitters. 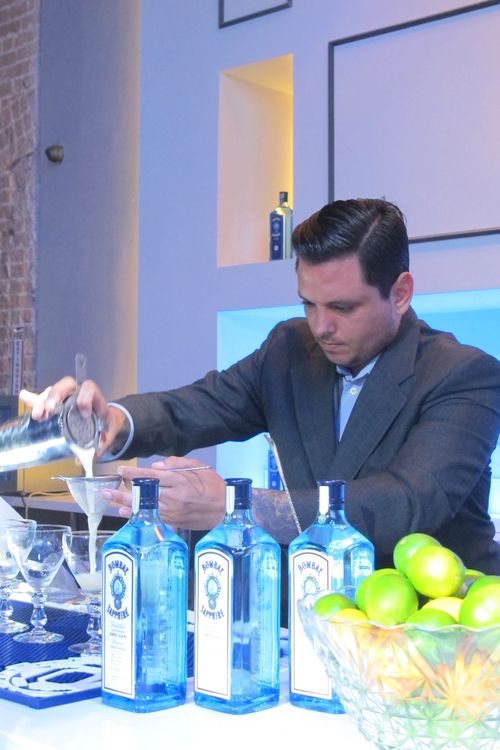 Rosalind Holm of Town Hall created a drink inspired by Golden Gate Park. In its ingredients (there were tons of them so this is probably half) were mushrooms, absinthe, chamomile, sage, basil, angelica, Fernet, and I think lemongrass, and it was garnished with "rose garden foam." I love how it took in not just the floral aspects of the park, but also the dankness and fog. 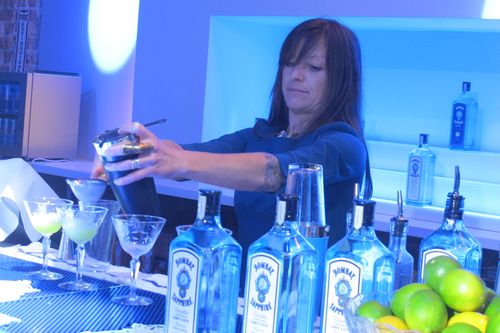 Greg West from Bourbon & Branch is hilarious to watch compete. His drink contained Bombay Sapphire, grains of paradise, tamarind syrup, and lime, and it was garnished with a dill and blossom foam. It looked like dessert. 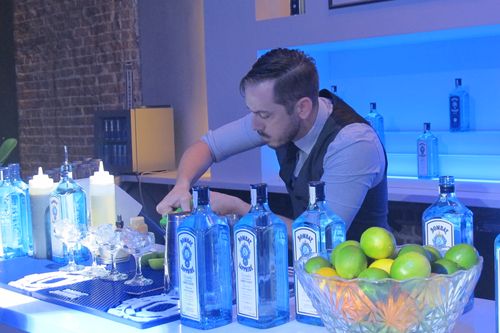 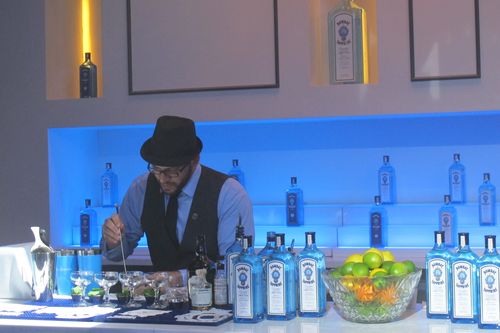 Rachael Kruse from Corner's Tavern in Walnut Creek made a drink called Tea Time, so you can guess that it contained tea syrup. It also had gin, Carpano Antica vermouth, orange bitters, and a big splash of Old Speckled Hen English pale ale. The tannins in the tea gave it a nice dry finish. 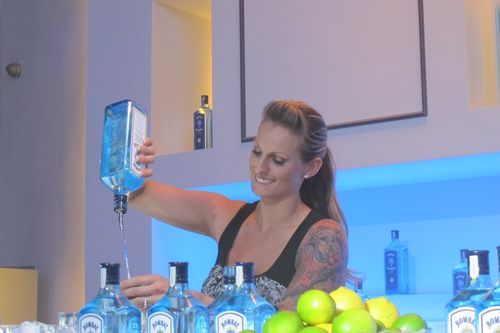 Andrew Meltzer from 15 Romolo created a drink called the Unfortunate Traveler, made with Aperol-cherry cordial, lemon, egg, soda, and Bombay Sapphire infused with peppercorns and coriander. It was garnished with grated almonds and cherries, and served on a stylish cloth coaster. Meltzer always comes dressed to impress. 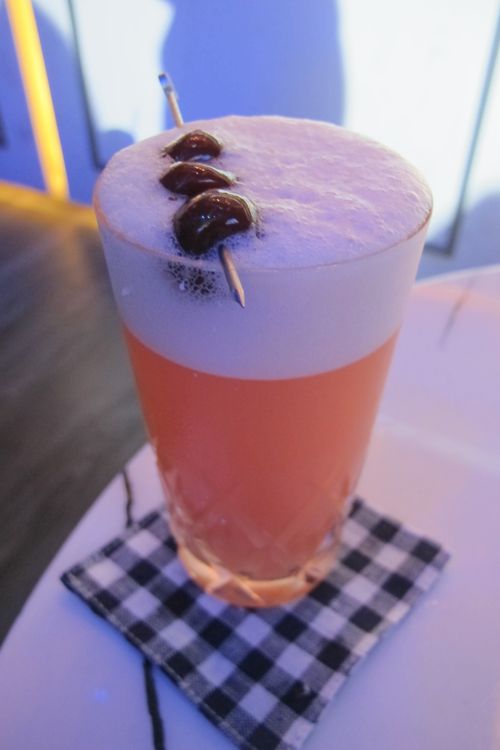 Zachary Taylor of the forthcoming Dirty Water made a drink inspired by soup(!) with corn cordial (!), chocolate mole bitters, Bombay Sapphire, and lemon, poured over a blackberry-Chartreuse gelee(!). It was very cool-looking, basically garnished on the bottom of the glass. 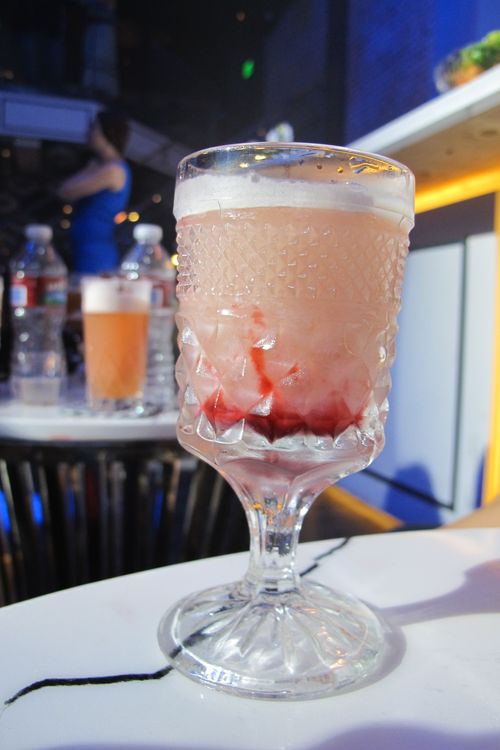 Well done to all and thanks to Jaymee Mandeville for hosting and MCing the competition. 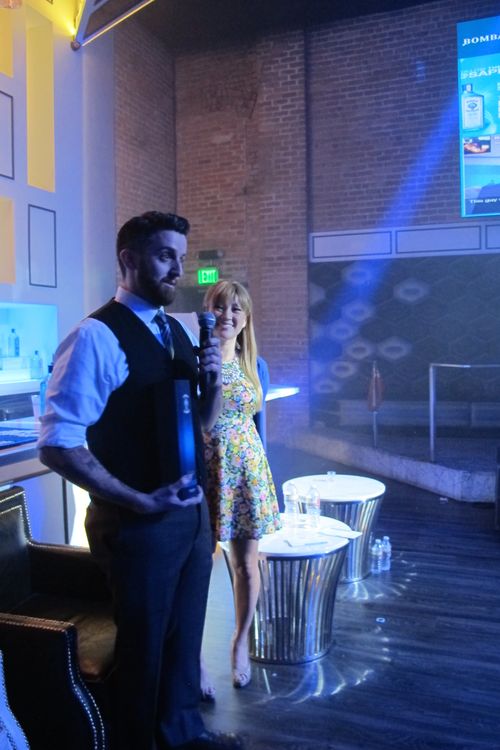