I'm researching potatoes in a little project for Karlsson's Vodka. I've been interested in potatoes for a long time so this was the perfect excuse to learn more.

The potato is native to the Andes mountains in Peru, and was the most important crop of the Incas.

There are about 5,000 potato varieties worldwide. Three thousand of them are found in the Andes alone, and all potatoes came from this single place of origin.

What Is A Potato?

A potato is classified as a tuber. A sweet potato, on the other hand, is a root. The plants seem to have a lot in common (and the first few hundred years after they were discovered by Europeans there was a lot of confusion as to which potato was being discussed), but botanically they are quite different.

Potatoes are propagated vegetatitvely - growers don't plant seeds (that grow on poisonous cherry-tomato-like fruits above the surface in some varieties, if allowed to grow that long) but pieces of the plant itself.

According to Potato by John Reader, "A potato is a grotesquely swollen piece of stem and buds, broken off from a part of the plant's underground stems." The function of this is a back-up method of propagating, and growers take advantage of it, as replanting potato pieces produces clones of known species rather than genetically-mutatable new plants if the flowers are pollinated by insects.

Nutritionally, a potato is nearly 80 percent water, then carbohydrates (mostly starch) and protein. It has a lower protein content compared with grains, though. In distillation of grains, distillers choose grains that are high in starch and low in protein, so this sounds like an advantage when it comes to making vodka from potatoes.

Potatoes are rich in Vitamin C and B complex vitamins, with "useful quantities" of calcium, iron, phosphorous, and potassium.  You can look up the nutritional value of a potato using the USDA Nutrient Database.

Potatoes have a distinct top and bottom. Who knew?

Potatoes Used to be Poisonous

Wild potatoes are good at growing at high elevations (like the Andes) with not great weather, where grains wouldn't be successful. But their use as a food crop was not at all obvious. Potato plants evolved in regions with long dry seasons so the underground tuber was an energy storage unit to make it though the season. They even grow in regions where no perennial grasses can survive.

The tubers of wild varieties are small and bitter and can be poisonous, so nobody knows how and why they were first cultivated. This bitter, poisonous quality in potatoes comes from glycoalkaloids. It is believed this quality was reduced (something like 15-fold) by purposeful breeding of the plants.

One study found that one in region where the plants still had high levels of glycoalkaloids, natives would mix the potatoes with clay when eating them. A modern analysis of that clay showed it contained something that binds with glycoalkaloids to neutralize their effect, and because of that people could eat potatoes without getting sick. 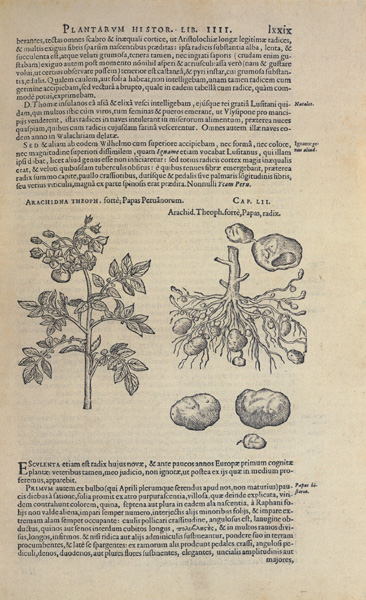 First known illustration of the potato from 1597. This was drawn from potatoes in Poland. [source]

Potatoes are surprisingly adaptable: Today they are grown in 149 countries around the world, from latitudes 65 degrees north to 50 degrees south, from sea level to over 4000 meters.

This post is part of a series sponsored by Karlsson's Vodka, which is made from seven types of Swedish "new" potatoes grown in the sandy soils of Cape Bjare. I visited Cape Bjare a few years ago and wrote about how Karlsson's is made here.

Bet a lot of people didn't know potatoes have vitamin C in them. I didn't realize how little i knew about the potato other than they are delicious with sour cream and butter. Great post.

Thanks for this information.
I know potatoes are an inflammatory food, which can be a concern for some people.

Thank you for this info,. I never knew that wild potatoes were poisonous, and I didn't know where they came from. When you see a potato in the woods don't eat unless you have clay to do so. Happy new year !

The wild potatoes are covered with toxic compounds solanine and tomatine innately averting bacteria, fungi, and animals. Both these toxic compounds are unaffected by cooking, leading the Inca Indians to find a way to break these chemical defenses. They observed few mountain animals licking clay before consuming poisonous plants, where clay adsorbs the toxins without affecting their digestive system.