Which Countries Grow the Most Potatoes? 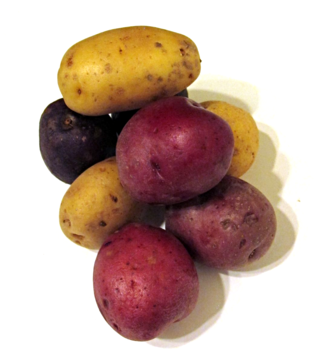 Potatoes originally come from Peru, but they're only the 18th largest producers of the crop. China and India, which are relatively new producers of potatoes, are the top growers.

Then the US and Russia are nearly tied for third and fourth. I for one, am doing my share of potato-eating and drinking to keep America strong.

Not many potatoes are exported (less than 5% by one calculation); they're not much of a commodity crop.

According to FAOSTAT, the Food and Agriculture Organization of the United Nations- Statistics Division, the top potato-producing countries in 2012 were:

Though I know some Korean soju is distilled from potatoes, and after sweet potatoes regular potatoes are the most common Japanese shochu base ingredient, but I don't know if any Chinese or Indian beverages are made from potatoes.

Sweden doesn't crack the top 20 potato-producing countries, but they sure grow potatoes there. In fact, if you search for "Swedish potatoes" you will find a ton of recipes, including something called Hasselback potatoes which looks amazing.

But the traditional summertime potatoes are called new potatoes aka fresh potatoes aka "färskpotatis" which sounds to me like "freshpotatoes" when spoken. The ripen in the summer and their skins are not mature so they slide right off. They are tiny and you eat them lightly boiled with dill and butter, though they're pretty buttery to start with.

It is from these heirloom potato varieties - seven of them- that Karlsson's vodka is distilled. They are distilled separately then blended together. They have also released two limited-edition, single-varietal vintage potato vodkas each with a widely different and robust character.

I visited Sweden a few years ago and wrote about how Karlsson's is made here.

One of the healthiest food.