Enzymes in Spirits: What Are They and What Do They Do?

In the process of making many types of alcohol enzymes are used, but I didn't know very much about them. So I decided to do some reading and share what I've learned. Or what I think I've learned anyway.

Enzymes are used in spirits production before fermentation. They are used to expose fermentable sugars in base ingredients so that they can be fermented by yeast. For example, a raw potato with yeast added to it won't produce potato beer (or not much of it). But when heated and with enzymes added then it will. 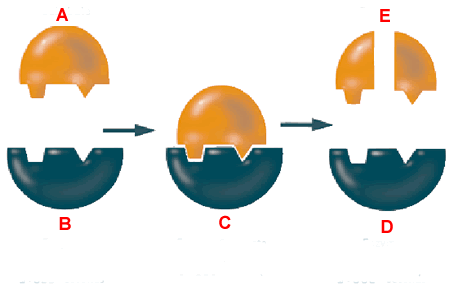 The enzymes are B,C,and D in this illustration. The material A is broken up. Source.

Some easy-to-understand cases where enzymes are used:

The website HomeBrewTalk.com has a great, detailed chapter on enzymes in fermentation. They lay out how grains for beer are often mashed (heated with water) to two different temperatures.

Mashing is the process in which the milled grain is mixed with water. This activates enzymes that were already present in the barley seed or have been formed during the malting process. These enzymes work best in particular temperature and pH ranges. By varying the temperature of the mash, the brewer has control over the enzyme activity.

In barley starch makes up 63% - 65% of the dry weight. Starch is a polysaccharide (very large chains of glucose) which is insoluble in water. Brewer's yeast, however, can only ferment monosaccharides (glucose, fructose), disaccharides (maltose, sucrose) and trisaccharides (matotriose).

In order for that starch to be converted into water soluble sugars (fermentable and unfermentable), two processes need to happen. First the starch is gelatenized to become water soluble. For starch found in barley and malt this happens above 140ºF (60ºC).  Secondly the activity of the amylase enzymes break the long chained starch molecules into shorter chains.

The malting process in scotch whiskey is a process to expose enzymes. To make malted barley, the dried grains are soaked in water so that the seeds just start to sprout, then the grain is dried to halt the process. Then when the grain is later mashed (has hot water added to it), the enzymes will convert the starches in the grains into fermentable sugars.

According to Ian Wisniewski in Michael Jackson's Whiskey,

"Growth hormones released by the grain also trigger the creation and release of enzymes that begin breaking down the cell walls and protein layers, in order to access the starch... The enzymes collectively termed 'diastase,' include alpha-amylase and beta-amylase (the latter is already present in barley). These enzymes are essential for the subsequent conversion of starch into fermentable sugars during the subsequent process of mashing."

Enzymes Used in Many Spirits

In other spirits, enzymes are added, which saves the malting step or speeds the natural reaction with enzymes naturally present. This is true in bourbon (from corn), in other spirits from grain (like vodka), and for potato vodka.

Most bourbon mashbills (recipes) contain a certain portion of malted barley. This is because the malted barley provides the rest of the batch with enzymes needed to break down the material into simpler sugars. However, in modern times many (if not all) major bourbon producers also add enzymes to the corn, wheat/rye, and malted barley mashbill to speed things up.

A good overview of the chemistry of this and list of enzymes available for purchase can be found on this IM biotech company site.

A Word on Karlsson's Vodka

I'm doing a research project on potatoes for Karlsson's Vodka, which I visited a few years ago.

From the few potato vodka distilleries that I have visited, it seems that adding enzymes is standard in the process of preparing potatoes for fermentation. So I used this project as an excuse to learn more about enzymes.

If you think about a raw vs. cooked potatoes, they get a bit sweeter after you cook them so we can guess that heat helps break down the starch into sugars- at least partially. Enzymes help with the rest.

Karlsson's uses "virgin new potatoes" to produce their vodka. These are very small, skinless potatoes that are full of flavor that translates into the final spirit.

Can you be more specific to the application for Rum? What is the best enzyme to use and when should it be added?