The deluge of new drinks books continues! These eight recently-released books cover cocktails, both new and historical, whiskey and where it comes from, brandy specifically and all spirits generally. 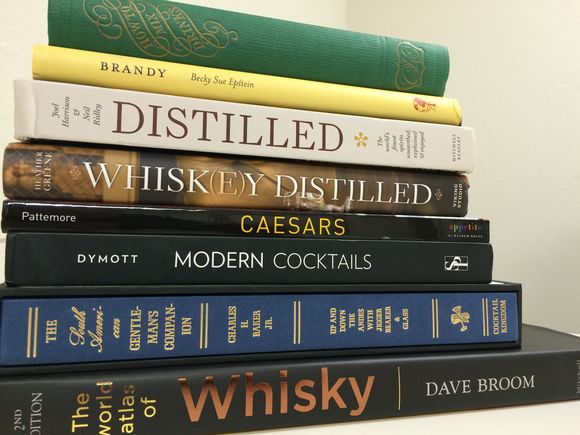 Sporting a new cover from the $1.50 version of The Bar-Tender’s Guide (the first reprint’s cover was the $2.00 version), this new release provides additional articles in the appendix, reflecting historian David Wondrich’s research on the life of the man some now consider the patron saint of bartenders. New documents – many of which are reviews of the book when it was first published – “add to the understanding of who Thomas was, what he did and what people thought about that,” explains Wondrich, who also unearthed one central fact about Thomas: his birth date – October 30, 1830.

Brandy chronicles the history of this spirit, traveling from medieval alchemists to present-day drink mixologists, and exploring brandy’s production and consumption from the Middle Ages to today. Becky Sue Epstein reveals that many cultures have contributed to the history of the beverage, from the Dutch calling the drink “burnt wine” to the Spanish colonials in Peru and California who produced the first brandies in the New World. She also explores the distillation and aging processes, and she discusses the spirit’s many varieties, including Cognac and the more overlooked Armagnac. In addition, Epstein offers advice on buying, storing, and serving brandy, while also providing recipes for both classic and new cocktails.

Note: This book doesn't come out until April 2015, so I received a super-early preview.

This book uncovers the best spirits the world has to offer. These are not necessarily the best-known examples on the planet, but the best crafted and most interesting. Spirit by spirit Joel Harrison and Neil Ridley explain what you need to know to appreciate a spirit - its ingredients, its classic forms, the choices a distiller makes in creating it - and offer their picks to 'Drink Before You Expire' - the world's best examples of their type, from gin and rum to shochu and tequila. There are plenty of suggestions for how to drink too, with  cocktails and their insider tips on getting the best out of your spirits. Joel Harrison & Neil Ridley write about whisky on their website Caskstrength.net.

Whiskey Distilled: A Populist Guide to the Water of Life by Heather Greene

Whiskey drinkers—especially novices—are more confused than ever. Over the past decade, whiskey expert Heather Greene has been bombarded with thousands of questions, including: Can I have ice in my whiskey? Why is it sometimes spelled "whisky"? What makes bourbon different? As New York City’s first female whiskey sommelier, Greene introduces audiences to the spirit’s charms and challenges the boys' club sensibilities that have made whiskey seem inaccessible, with surprising new research that shows the crucial importance of "nosing" whiskey. In this guide, Greene uses bright visuals, an easy-to-read format, and the familiar vocabulary of wine to teach readers about whiskey and encourage them to make their own evaluations.

Caesars: The Essential Guide to Your Favourite Cocktail by Clint Pattemore

First mixed nearly fifty years ago in Calgary, Alberta, the Caesar has grown to become one of the most popular cocktails across our great nation. Caesars is the ultimate guide to this Canadian classic, containing more than 50  recipes for Caesar variations, and 20 food recipes to pair with them. For this colourful cookbook, Clint Pattemore, Chief Mixing Officer for Mott's Clamato, has teamed up with Top Chef alum Chef Connie De Sousa and Charcut Roast House co-owner Chef John Jackson.

Modern Cocktails: Dozens of Cool and Classic Mixed Drinks to Make You the Life of the Party by Jimmy Dymott

Jimmy Dymott shares sixty of his favorite and most impressive cocktails, from classics like the Old Fashioned and the Gin Fizz, to modern favorites like the Juicy Fruit. He includes recipes for drinks invented at his own bars—with mint, passion fruit, and fresh ingredients, they’re always in high demand. Dymott explores the history of each drink—some spanning from eighth century Persia to the American South in the 1800s. Plus, he offers the tools needed to make each drink pro, the types of bars out there to emulate, and great stories from Dymott’s fifteen years in the cocktail scene.

The World Atlas of Whisky: Second Edition by Dave Broom

Whisky expert Dave Broom explores over 200 distilleries and examines over 400 expressions. Detailed descriptions of the Scottish distilleries can be found here, while Ireland, Japan, the USA, Canada and the rest of the world are given exhaustive coverage. There are tasting notes on single malts from Aberfeldy to Tormore, Yoichi (and coverage of the best of the blends). Six specially created 'Flavour Camp Charts' group whiskies by style, allow readers to identify new whiskies from around the world to try. This extrensively updated and extended edition features new material on burgeoning areas, including detailed coverage of many recently opened US craft distilleries, new distilleries in Germany, Austria and Switzerland, and discussion of the growing whisky scene in Latin America.