New Bar Books Highlight the Regulars Along With the Recipes

Cocktail books are evolving. In the olden days the recipes were written for bartenders rather than consumers, and some books provided extra content for that audience, like proper hospitality lessons, recipes for complicated bitters, and cocktail taxonomy.

But most cocktail books meant for consumers are of a standard format: instructions on glassware, syrup preparation, etc. in the front of the book, then a big list of recipes as the rest.

Lately more books are emphasizing technique rather than recipes, like Tony Conigliaro's The Cocktail Lab, Jeffrey Morgenthaler's The Bar Book, and Dave Arnold's Liquid Intelligence. They all include drink recipes, but that's not the sole focus.

Another new approach to cocktail books is to focus on the bar from which the drinks came. The general form of these go way back, at least as far as The Savoy Cocktail book from 1930, through the Cafe Royal Cocktail Book (1937), all of the Trader Vic's books, up to modern times including Bixology, Cocktails of the Ritz Paris, The PDT Cocktail Book, and others.

Some of these books give a glimpse into what the bars are like beyond the drinks that are served there, with illustrations, house rules, and photos of the staff.

Two books new this year take it even further: they give space in their pages to the regulars who populate the barstools. 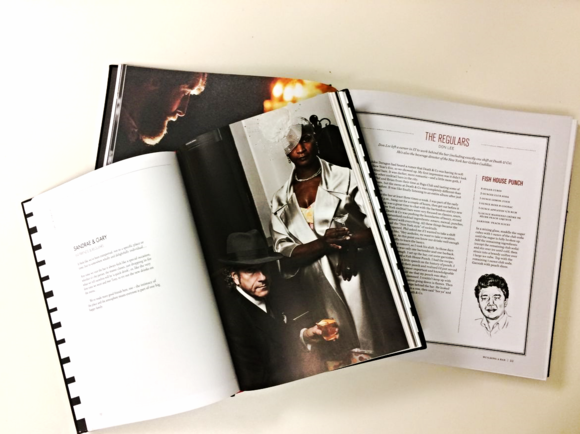 69 Colebrooke Row by Tony Conigliaro is a celebration of the London bar's 5-year anniversary. It's the first book I saw that had photos of its regulars, though it would soon be followed by Death & Co: Modern Classic Cocktails by David Kaplan, Nick Fauchald, and Alex Day, with illustrations of some of the regular crowd.

In each book the regular customers tell a little story about discovering the bar, their favorite drink, or what they like about going there in general. And it seems the bar owners are proud of their regulars too- they seem to promote people you'd  like to have a drink with, like a cocktailian priest and a tattoo parlour owner.

I've really enjoyed reading the small write-ups about the regulars and think these vignettes are a lovely addition to modern bar books. Because for as much as I value the quality and ingenuity of the cocktails above all else at a bar, it's not all about the drinks after all.

David Wondrich on Twitter noted that the Sanctuaria book from a few years ago also included pictures of the regulars.
http://sanctuaria.mybigcommerce.com/dive-bar/

My book was made in this new direction