The Old Fashioned Outsells the Manhattan

Using my keen powers of barstool observation, I noticed a while back the rise of the Old Fashioned as the safety drink at bars, ordered by the same folks who were ordering Manhattans only a year or two before.

I say "safety order" not to denigrate the drink, but that's what it is for many people. Many guys, I should say. A cocktail that's hard to screw up, comes in a bucket glass, sounds macho, and you can order it without having to read the drink menu.

(I'm not sure why people are put off by reading cocktail menus - either they just want a drink fast or they don't like scrolling through a list of weird ingredients of which they've never heard.)

So anyway, I wrote a story about it in the Winter 2014 issue of Whisky Advocate. Unfortunately they don't put their print stories online, but you should really subscribe because the magazine is so good, not joking.

I asked a bunch of bartenders (at craft cocktail bars, not like TGIFridays) whether I was full of beans or if my observation was correct (of course it was, duh), and even found some people to run the numbers for me.

Mike Ryan of Sable in Chicago (now a mixology director for the Kimpton hotel group) found that the Manhattan was the top-selling whisky drink in 2010 (when the bar opened) until 2012. Then the Old Fashioned appeared on the sales list the following year, and by 2014 (he ran the numbers early in the year), the Old Fashioned was one of the best-selling cocktails overall. The Manhattan barely cracked the top ten drinks. 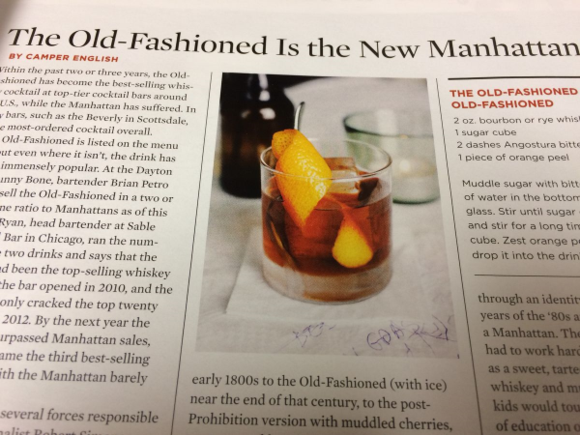 I would respond that the "new Mojito" was ordering a drink from the menu where you are and not treating all bars like they all serve the exact same drinks.

Nobody liked that answer but for a while there really wasn't a leading cocktail to name. Now there is. Hooray I guess.