In 2014 I visited the Bunnahabhain (boo-nuh-ha-bin) distillery on the island of Islay off the western coast of Scotland. Bunnahabhain is the northernmost distillery on Islay (home to whiskies including Laphroaig, Bowmore, and Ardbeg) with the Paps of Jura just across the water. They call Bunnahabhain "the welcoming taste of Islay" because unlike those other scotch whiskies, Bunnahabhain is mostly not smoky and heavy. 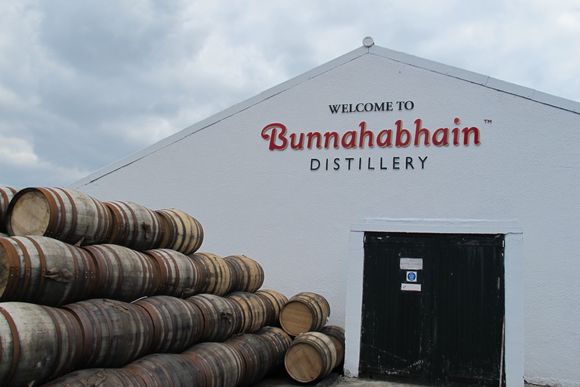 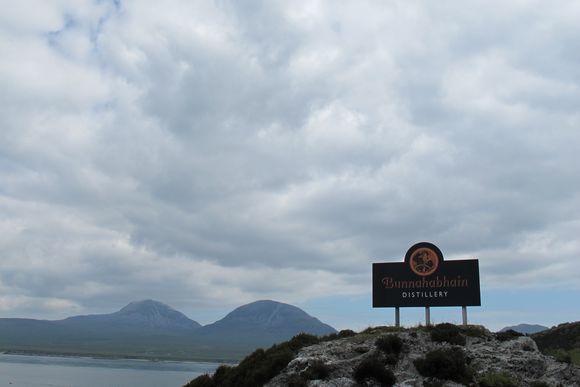 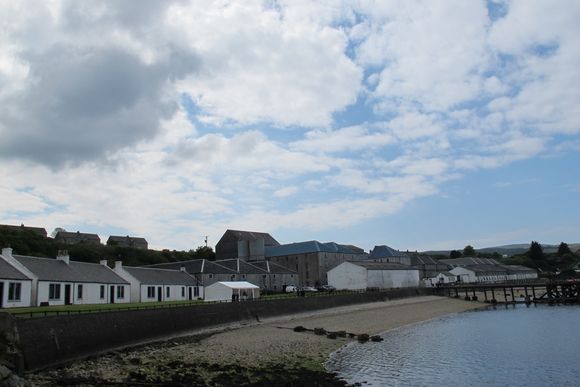 It wasn't always that way. Until 1963, according to Distillery Manager Andrew Brown, Bunnahabhain made smoky Islay-style whisky. In olden days, they used to malt the barley on-site, but now the old malt hall holds barrel aging facilities.

Now they use unpeated barley (less than 2 ppm phenol) for most of their whisky except special editions. Those take place during only a few weeks during one period of the year. In 2014 the were doing 9 weeks of peated malt distilling, using barley with a phenol level of 35-40 parts per million. Malted barley is delivered to the island and ground on-site. 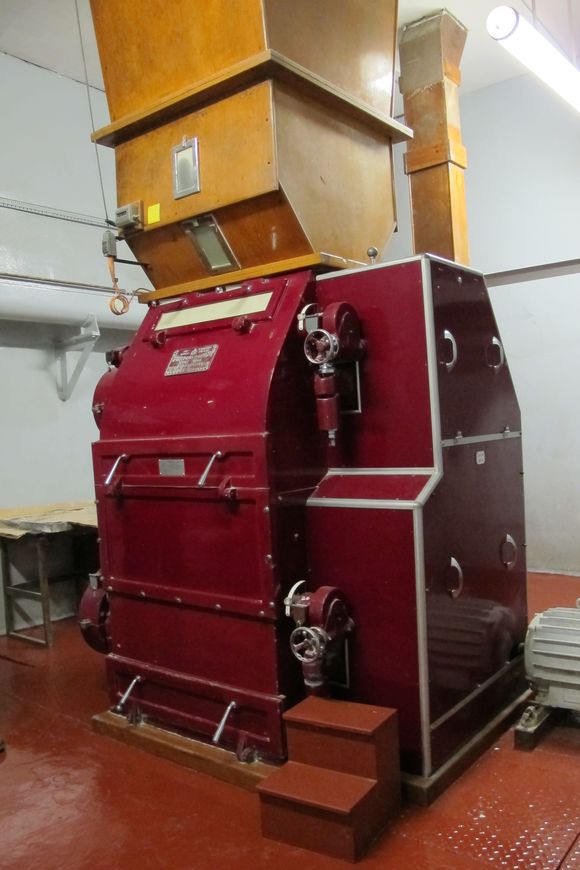 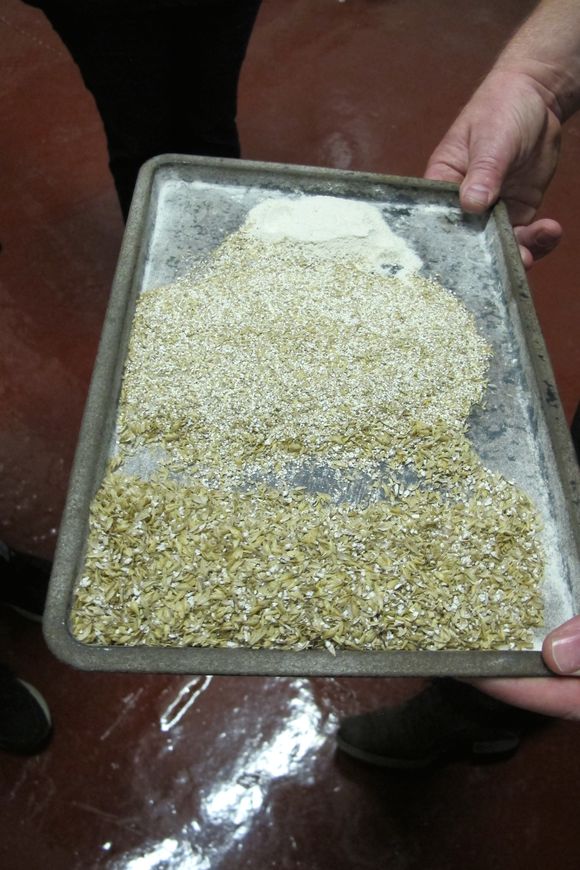 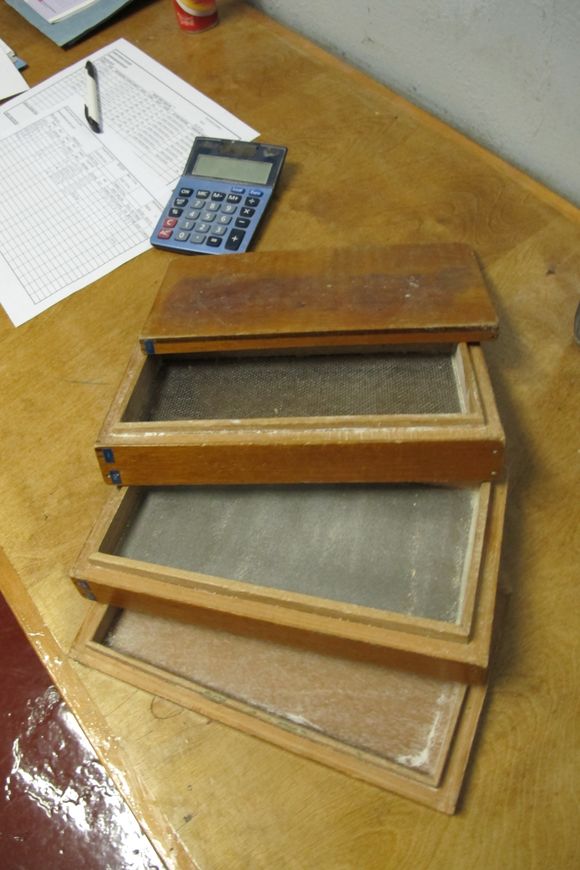 It is then washed with hot water to wash out (and keep) the fermentable sugars and leave behind the solids. The mash tun holds 50,000 liters.

If I got this right, the barley contains 20% fermentable sugars going into the wash, and sugars are washed out (to go to fermentation) at each step: 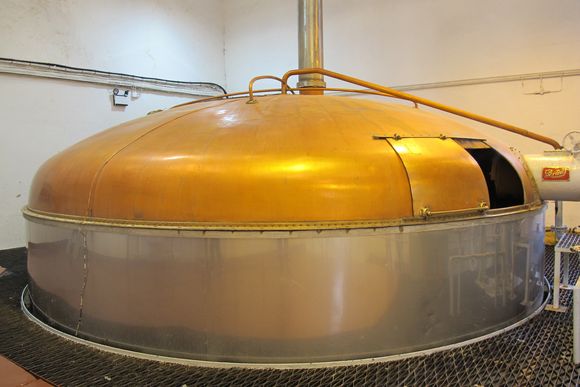 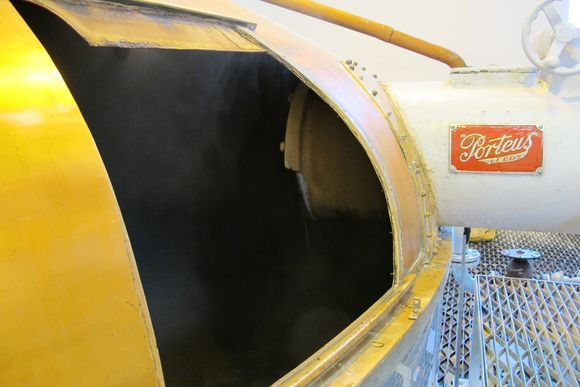 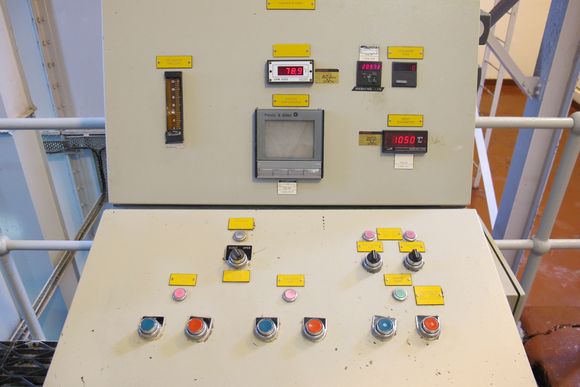 The sugary liquid is now ready for fermentation, which is done is one of six wash-backs. The liquid ferments for either 48 hours (on Mondays and Tuesdays so they can distill the fermented beer later in the week) or 110 hours (on Wednesdays, Thursdays, and Fridays, as these will be distilled the next week after the weekend). Brown said this doesn't make a change in the final spirit's flavor after distillation, but they do blend together the spirit made from the two different fermentation times before barreling anyway.

Bunnahabhain is the only distillery on the island to use pure spring water for fermentation. Much of the water for other distilleries starts at one place on Islay and runs over peat bogs on the way down to the distillery, but Bunnahabhain pipes their water 2 miles from the spring so it doesn't run through peat. 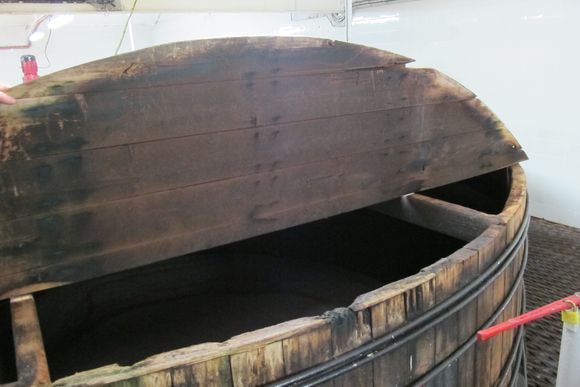 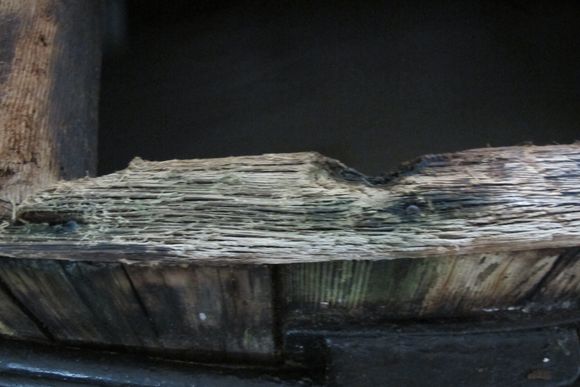 The stills here are the tallest on Islay, all packed into a little still room. Two of the stills are quite old, while the other two were added in 1963 along with other equipment when the distillery changed format from Islay-style to unpeated scotch.

When they distill peated whisky during those few weeks of the year, they take different heads and tails cuts on the second distillation as opposed to when they're distilling unpeated whisky. 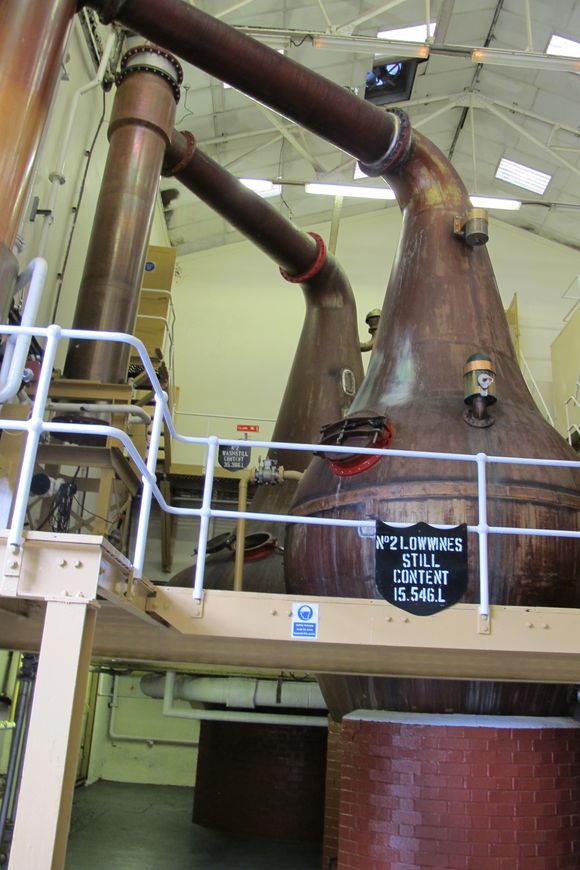 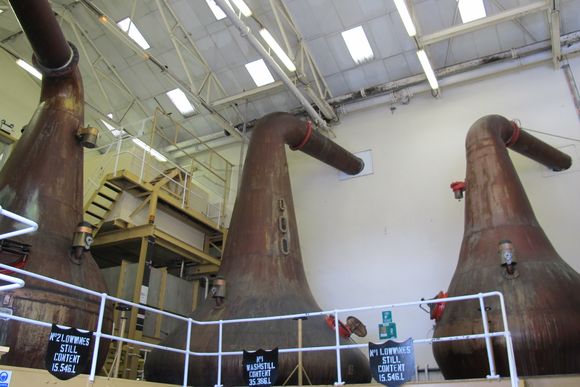 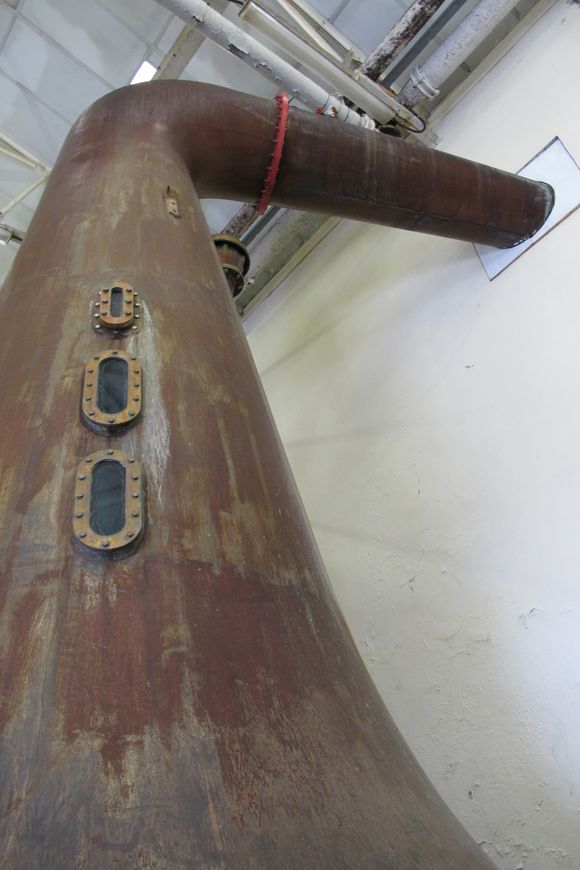 Water used to bring the newly-distilled whisky down to barrel proof is the same spring water used in distillation but run through a 5 micron particle filter and then a UV light filter.

All of the single-malt whisky made by Bunnahabhain is aged on Islay. They have 21,000 casks aging locally in 6 dunnage and 1 racking warehouses. Whisky for the blends ages on the mainland.

The whisky is bottled on the mainland outside of Glasgow, using the same water that Deanston does (demineralized municipal water).

Bunnahabhain sells about half of the whisky they make to other brands for use in blends. Of the remaining half, 10-20 percent of it is sold as Bunnahabhain single-malt, while the rest goes to their own blends. The parent company Burn Stewart produces Scottish Leader and Black Barrel blends.

I visited the distillery during Feis Ile (more on that later), which didn't give a lot of time for quiet contemplation, but here are a few notes on what I tasted. 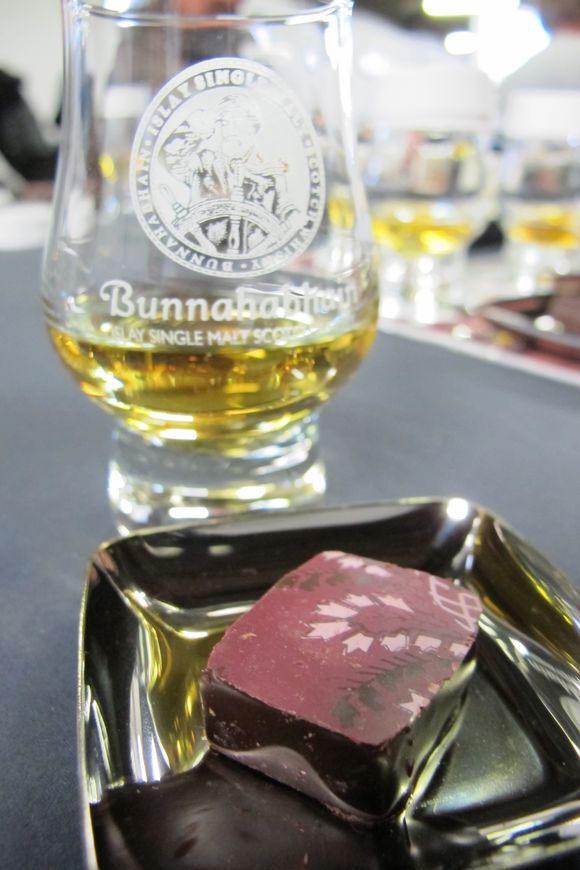 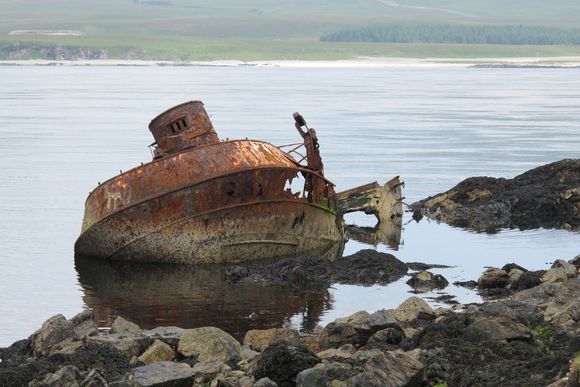 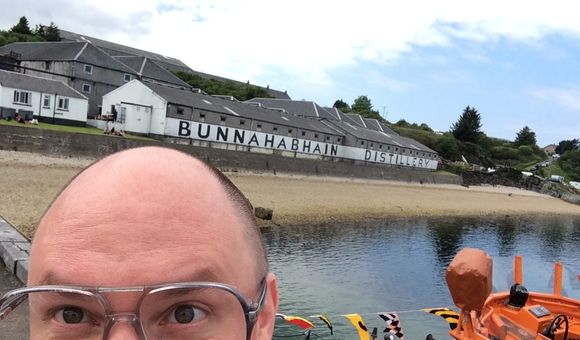 It was a great day on Islay and my third visit to the island, yet I can't wait to go back again.

I spent a night there in 2006. Don't know if they still offer it, but you used to be able to stay in a "cabin" on the grounds. There didn't seem to be another soul on the property, and it was the darkest night I've ever seen. Luckily I had some small bottles with me.

Nice! I can imagine it would be dead quiet there at night- spoooky. I don't know if they still have that cabin, not that I've heard of but it might just not be open to the public.

When I was there a year ago last fall (Sept 2013) the folks in the tasting room / gift shop told me that the cabins were no longer open, but the management were hoping to renovate them at some unspecified future point and begin offering overnight stays again.

A lonely but beautiful location.

Thanks for the intel!

My favorite whisky. Hope to visit distillery someday-when those cabins are open again )