Lost Spirits Distillery in Monterey County, California, is a kooky little place, resembling more a back yard miniature golf course than a typical distillery. Most of the equipment is outdoors, including the pot still that's shaped like a dragon, miniature grain-smoking pagoda, and the above-ground pool that serves as the cooling water for the condenser. 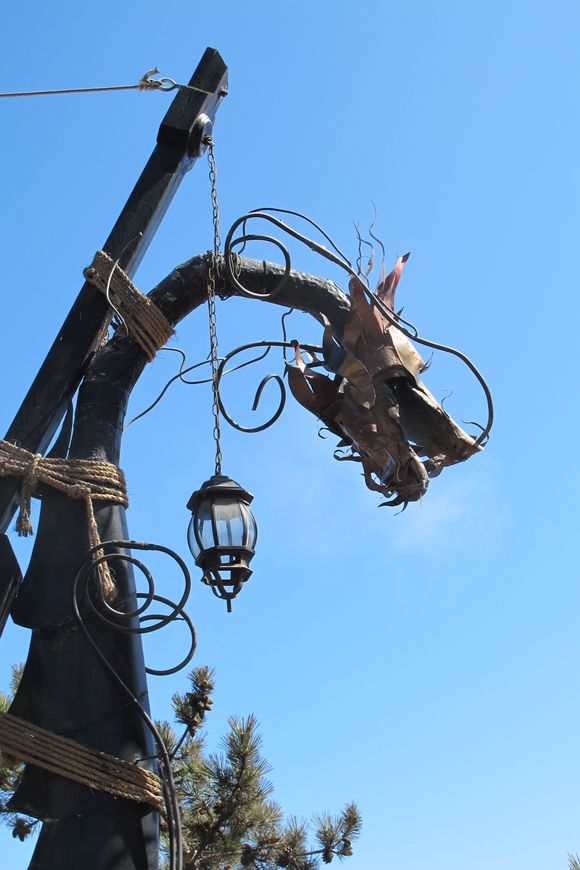 The distillery is run by Bryan Davis and Joanne Haruta. You may remember them from several years back when they ran a distillery in Spain that produced Obsello absinthe and Port of Barcelona gin. Davis is a former art teacher and zoo exhibit designer but he has picked up more than a little bit of chemistry as we'll soon see.

So, that dragon-shaped pot still: It's powered by an old apartment building steam boiler for heat. The body of the still (300 gallons) looks like a big barbecue grill but it's made out of roofing copper. The shape was built in a way to minimize removing flavors, rather than rectifying much like tall round pot stills. Davis says, "We engineer the fermentation so much that we want to capture more of the flavor in distillation." 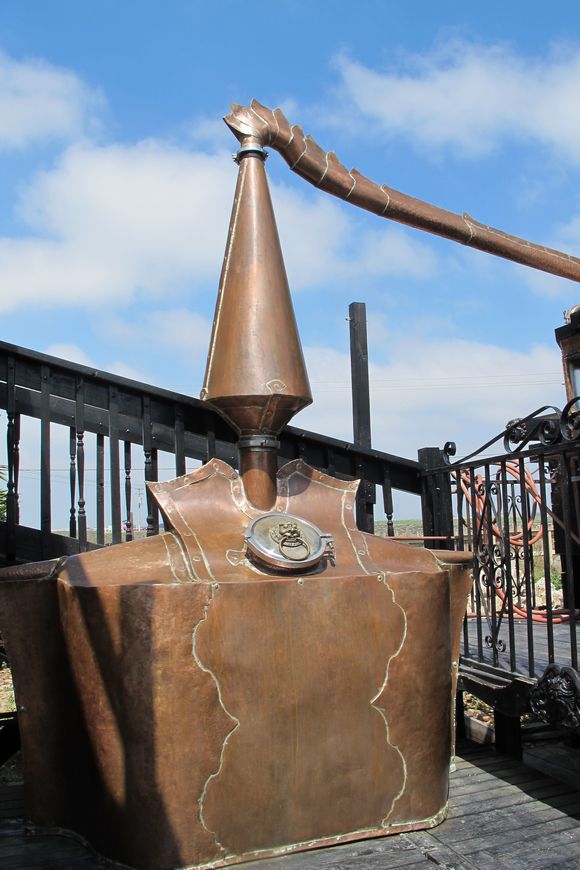 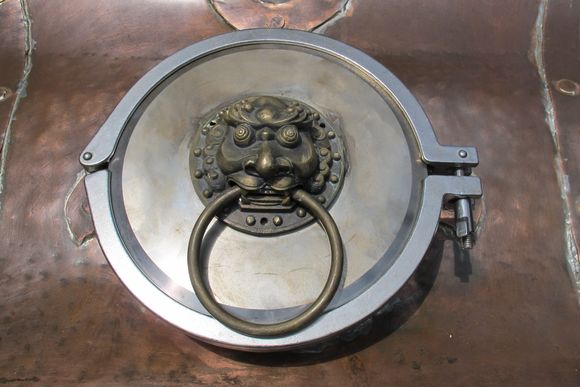 The dragon tail is the lynne arm, which dips into a horizontal condenser. The water for the condenser comes from the bottom of a swimming pool, which heats up over the day of distilling, sometimes reaching 100 degrees Fahrenheit.

With their old still, which was built out of wood, they would hop in the warm pool at the end of the day and use it as a hot tub. But chlorine and wood doesn't mix - the still actually got corked and they had to replace it. (For those of you barrel-aging cocktails, never rinse your barrels with chlorinated tap water for this reason.)

Davis would like you to know that the pool water does not actually go into the whiskey; it stays in the pipes for cooling purposes only.

The dragon's head is a steam release, so while distilling steam shoots out its mouth. 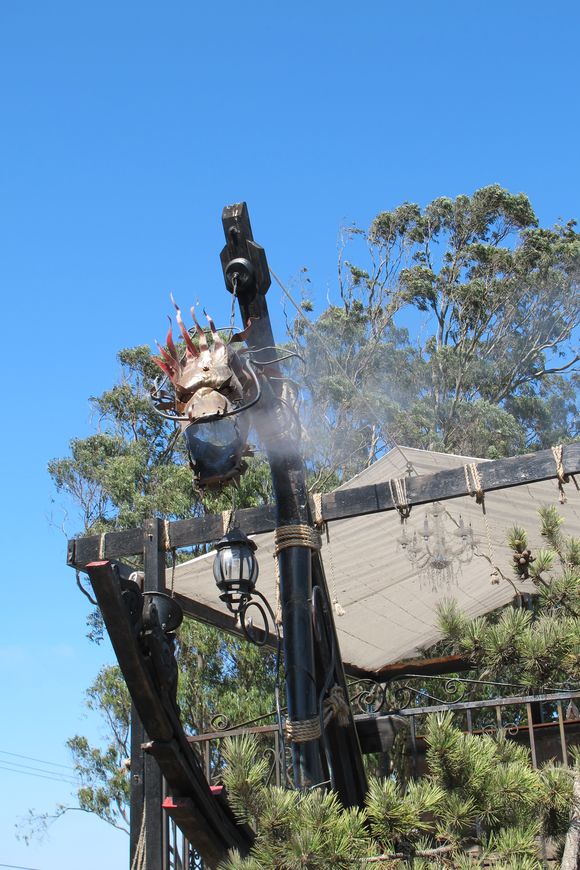 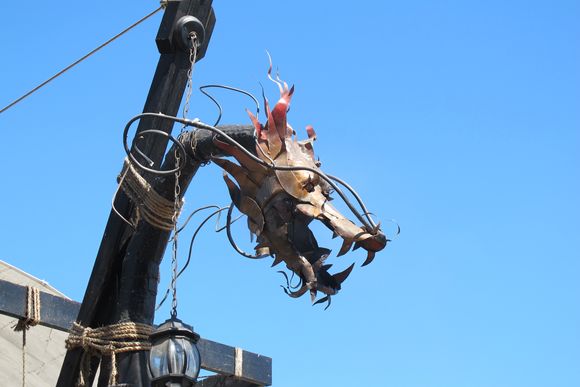 At this distillery they make whiskey and rum. The whiskey I wrote about for Whisky Advocate and I'll try to publish some more info here when the story comes out.

We watched an incredibly scientific Powerpoint presentation about the rum called, "Engineering Rum: The Fruit Nature Forgot to Make." I'll cover what I think I learned from it.

There will probably be some mistakes in the below text, so please don't take it as gospel but as starter info for further exploration.

At Lost Spirits, they imitate the dunder pit process in a more... clean way. They mash up bananas and add lab-controlled bacteria to it. Then they add this to the fermenting molasses.

In the process of fermentation, there is a battle of yeast versus bacteria. The byproduct of yeast's battle against bacteria is acetic acid and trace carboxylic acid. Yeast under stress bind acids to alcohol and make esters. They accomplish this stress by adding dunder to yeast.

As the goal is to get funky, stanky (high-esther, high-acid) rum out of the still, their still is a low-rectification model (short and squat). This will allow more of these compounds to pass over in distillation.

One flavor they want to get out of their rum is a honey flavor, which is phenol-ethyl acetate. This comes from ethyl acetate (ester) plus phenol. And the ethyl acetate comes from from acetic acid (that comes from wood, yeast, and bacteria), wood as a catalyst, and ethanol.

Got that? Yeah me neither but sorta.

To age their rum they use new American oak barrels, smoked and charred to release lots more esters. These barrels are then seasoned with sherry.

Another flavor they want to crank up in their rum in rancio, a flavor found in old cognac and other spirits but that usually doesn't turn up until about 30 years of aging. However, Davis notes that it shows up earlier in solera-aged spirits, which are aged in super old barrels.

Rancio comes from lignin (from long-aged wood barrels) decomposing in liquid. So they have figured out a way to copy this process and are patenting it. So all I know is what they're doing; not how.

Rums Coming Out of the Distillery

Rums coming out of the distillery come in small batches and include Navy-style rum, Cuban-style rum, Colonial American-style rum, and Polynesian-style rum. I'm not sure what the difference is between the various styles, but they're all high-proof.

I believe that the navy-style rum is the easiest to find. Some of it comes in at a whopping 68% and retails for about $45, which is an absurd bargain.