The Complicated Aging Process for Cognac, as Seen at Cognac Hardy

In 2014 I visited several cognac houses, and had the pleasure to spend several hours with Benedicte Hardy of Cognac Hardy in their aging and blending facilities.

We got really nerdy with specifics on aging cognac. But first, some background.

Hardy specializes in luxury cognacs, and in general is blended in an "approachable" and "feminine" style. It's a very large operation, with 20,000 barrels aging at their warehouses valued at more than 50 million dollars worth of booze.

It was Benedicte's father who made the company famous in recent years putting the emphasis on luxury. She herself has a law degree and is in charge of the US market, so there may be opportunities to meet with her at events in the States (and I'd highly recommend doing so if the occasion arises- she's a character). 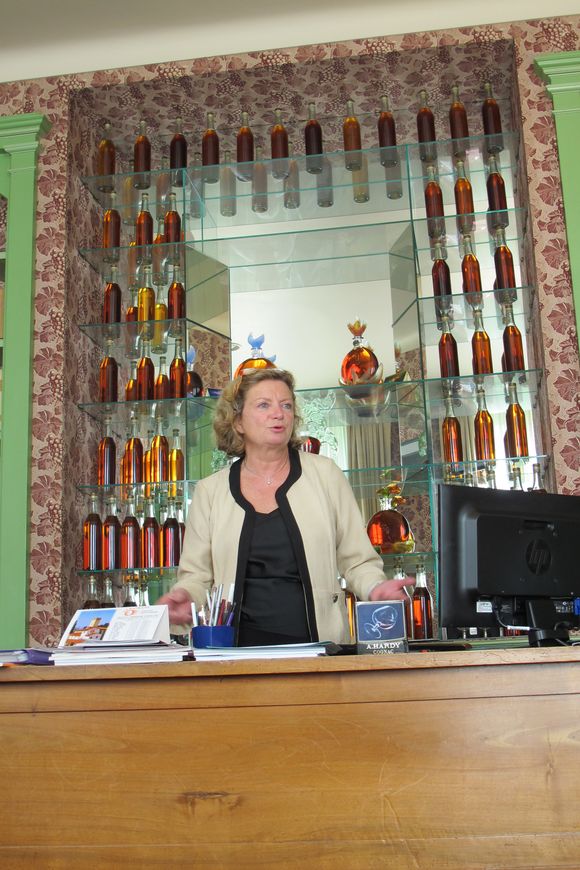 A Cognac Maker, Not A Distiller

Hardy is not a cognac house that grows, ferments, and distills grapes, but they do work with a co-op of 200 growers.

The blender, Michael, buys spirit from Grande Champagne, Petite Champagne, Fin Bois, and Bon Bois. But he doesn't just purchase already-distilled wine, he goes to the distillery/wineries to taste before/after and helps direct the distillation if need be. He said that for example, if a wine is super aromatic he might instruct the distillery to distill on the lees, which will mark the spirit for longer aging.

Regardless, he tastes the new-make spirit after purchase and makes a determination on which product they're destined for - VSOP, XO, etc. He says that 90% of the time the initial determination is correct and they won't have to redirect it off its appointed path later on. 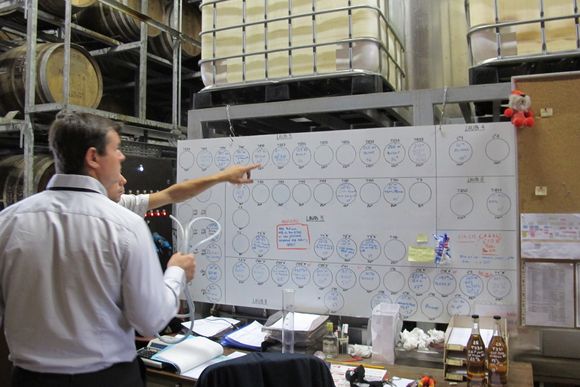 Aging Cognac Versus Other Spirits

Many of the world's spirits, including nearly all scotch whisky, rum, and tequila, age in ex-bourbon casks. The wood has had its influence on the bourbon and vice-versa. So the next time that barrel is used to age rum or whatever, it will not have the same amount of influence on the color and flavor of the next spirit.

In cognac and armagnac, on the other hand, they do not use ex-bourbon casks but new and used French oak barrels.  The wood gives a lot of influence when it is first used, and in the case of French oak it brings in lots of tannins along with flavor.

So while bourbon ages only in new barrels for its entire life, cognac is usually aged only for a small amount of time in new barrels then it is transferred into older barrels for the rest of its life so that the wood doesn't take over. (One thing to note that in Cognac, a 'new' barrel means that it has been used for three years or less; it's doesn't necessarily mean brand new.)

In scotch whisky and rum and tequila, since they're using used barrels from the get-go, they don't have to worry so much about the over-oaking so they don't need to move the liquids around unless they feel like it. 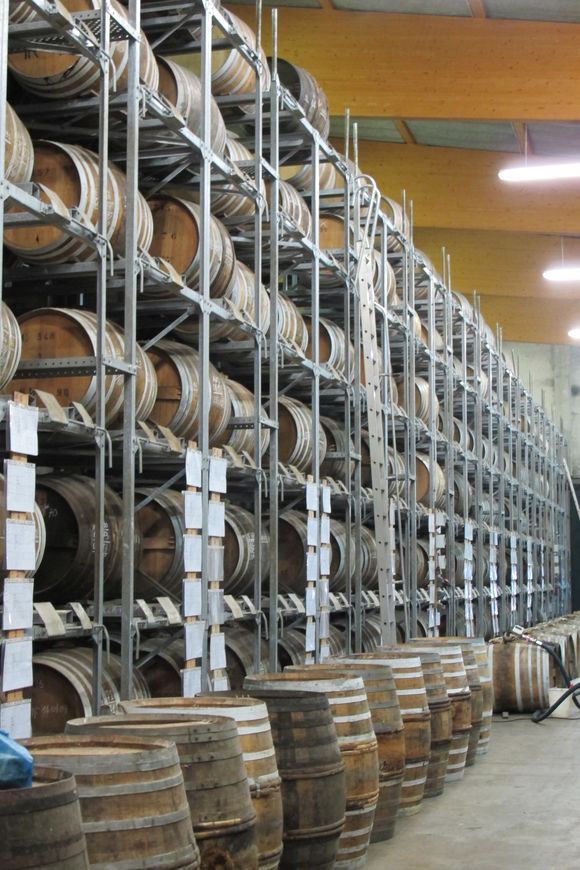 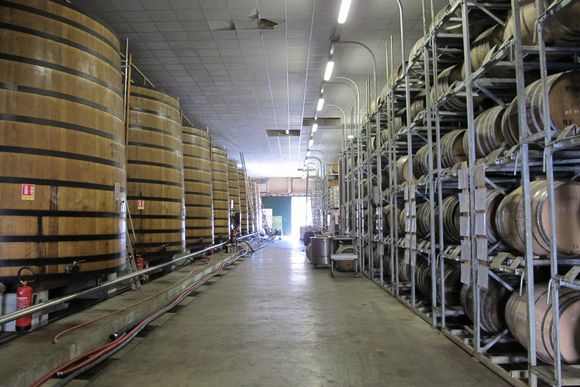 So that was a lot of lead-up. Here is how the VSOP is aged at Cognac Hardy. 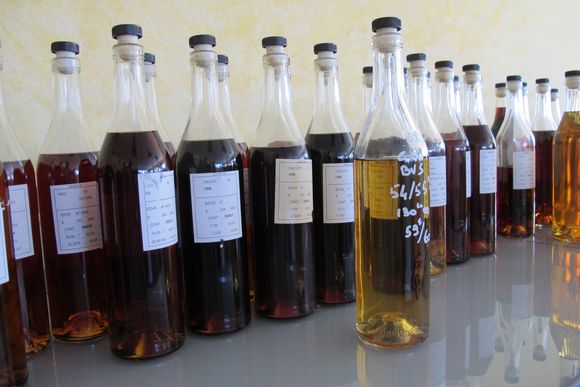 We were allowed to taste the highest of the high end Hardy cognacs bottled in Lalique decanters, which retail for $16,000 per bottle. They all come from the same stock of cognacs distilled in the 1920s-1940s, but are blended to bring out different aspects of each.

They are named for each of the four seasons, though currently only the spring (Le Printemps) is on the market. Summer launches in November 2015, and Fall and Winter will follow every 2 years from that.

It's weird and rather awesome to be able to taste a cognac that won't hit the market until 2019. 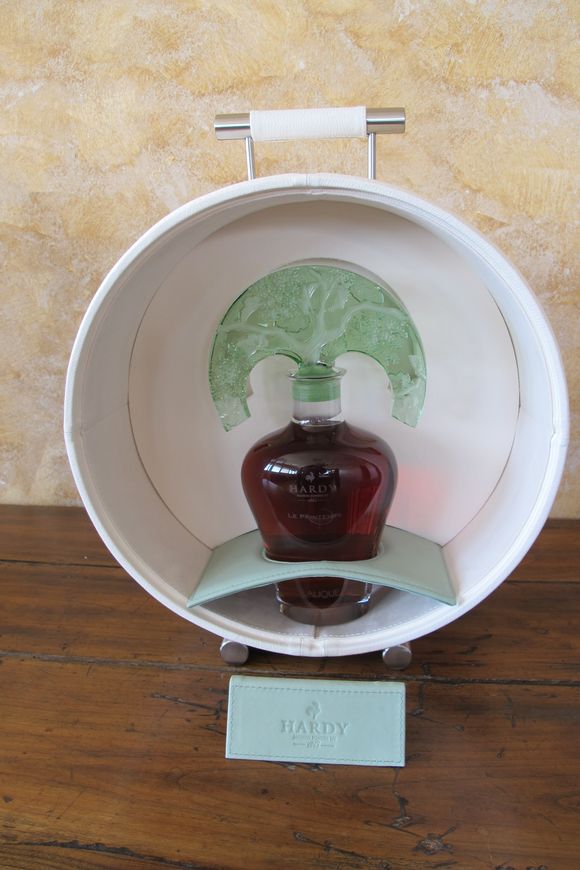 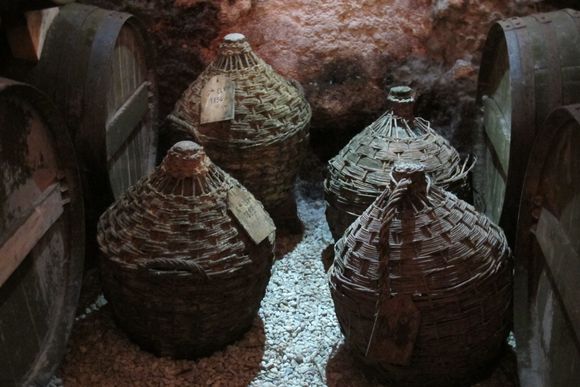 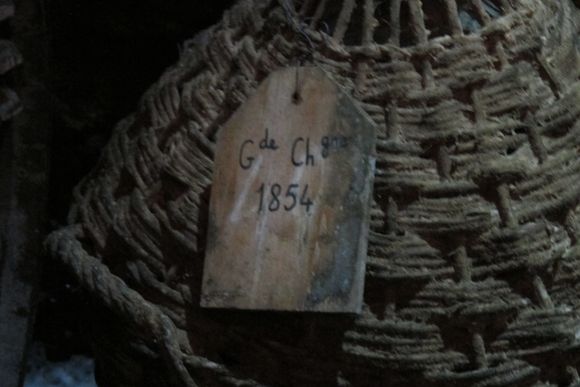 Awesome details Camper. Do they have long aged eau de vies that end up below 40% ABV? If so do they then just bring it up with higher ABV eau de vies or do they always pull it out to demi johns before it gets that low?

Dear Camper,
Thank you for such an excellent article, the aging process is a complex activity and I was keen to find out about Cognac Hardy's approach. I cannot even begin to tell you how jealous I am of your visit and tasting. In the past I have enjoyed a few of their offerings and am looking forward with hope to try the Le Printemps and the other seasons when they are available. Lucky, lucky you!
Kind regards, David.

Thanks. Well I don't believe they want any cask to go below 40% (as then it would no longer be cognac) but they can blend in higher-ABV cognacs before that point to balance it out. As things are always being blended and re-casked they have the opportunity to do that at any point.

I would imagine (read: I don't know for sure) that if they think an eau de vie has particularly good chance for long aging they'd start it aging at a higher ABV and keep it in the cellars to minimize the angel's share throughout its life.

Dear Camper
I have not quite understood a few issues
- why dilute at each cellar change; don't the angels take care of that anyways>
- does a cellar change always mean a barrel change? If so, do the size of the barrels change (point 6 ...placed back into small barrels) or do the barrels used get older or both?

Hi - Good questions.
1. Cognac and Armagnac producers do not like to add water all at once to the final brandy, as they believe this doesn't integrate well. They call it "breaking" the brandy when you do that. It is typical for producers to dilute with water very slowly, over a period of days, weeks, or even months for the very old stuff. Many producers also age a low-ABV water/brandy mixture "pete d'eau" in barrels alongside the brandy to use for dilution for similar reasons.

2. At each stage above the brandy from the barrels is put into a big vat, sometimes diluted, and then redistributed to barrels (probably different ones) in the new location. Part of the reason is so that the barrels stay full when refilled and do not dry out due to the angel's share. In the specific case of Hardy, I wasn't able to confirm that they go into larger and smaller barrels vs. staying in smaller barrels the same time.

3. Typically in Cognac/Armagnac the brandy is first aged for a short period of time (6 months or so) in a new (used for less than 3 years) barrel, then transferred to an older barrel (so that the wood tannins will not overtake the spirit flavor). For coganc that will be aged a super long time, they go into barrels that are "neutral", that don't really give much any flavor to the aging spirit.

Hope that is helpful!

Hello, thanks for your very informative article. I may be missing something here but I have a question. If I buy a 1974 bottle of Castarede Bas Armagnac, for example, what does that date mean? Surely it doesn't mean that it was bottled in 1974. Does it mean it's been in a barrel since 1974 and only recently bottled? I've been searching all over and can't for the life of me work this out. Please help!

Hi - That means that it was distilled (and put in a barrel) in 1974. Most likely it was only recently bottled but you'll have to check with the brand/label for when it was bottled or the "x years old" statement. It should be on there somewhere!

I thought the whole point of aging was for the spirit to interact with the barrel. So why age at all if they are actively discouraging this interaction? Why not use steel for example? is there another checmical reaction happening that requires it to be aged another 20 years?

Hi - Nope, not the whole point of aging, but an important one. Reactions happening in a barrel are typically extractive (pulling flavors from wood), reactive (spirit interacting with the wood/wood flavors), and oxidative (such as resting in a neutral vessel or old barrel). Plus: evaporation can concentrate flavors in the liquid. So that's what's going on in the extra 20 years in a breathable vessel. But at some point for very old brandies, they'll stick them in glass and seal them up.

Hello, liked the article very much. I work at a winery/distillery in Pennsylvania. My boss and I were both figuring out the process of aging the Brandy like we age our bourbon. What puzzled us was to why the transfer from new to used oak in a certain time so to avoid getting too much oak flavor rather than it stay in the one oak barrel.

When I buy Burbons I go for the Wheated ones. I am trying to find a young fruity Brandy NOT aged in a RYE bourbon barrel. I do NOT like the pepperiness imparted by the Rye, kinds of ruins the brandy! If I wanted something with the rye I just buy Jack Daniells instead. Any suggestions for Brandy young fruity without the pepper?