Last year I visited Limoncello di Capri located on the island of Capri south of Naples in Italy. The liqueur is assembled on the island from ingredients produced on the mainland, including the lemon peels. These come from the Sorrento area nearby. 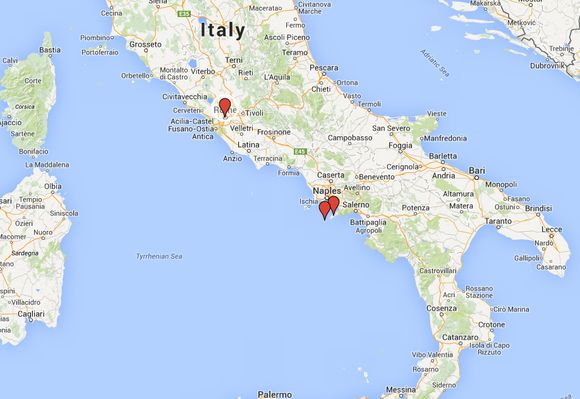 The Sorrento region has a long history with citrus. During the Greek/Roman period there were lemon trees planted for their beauty in the area. In the 17th century Jesuits started cultivating lemons to use as disinfectant against cholera. The beginning of the 19th Century saw the use of the pergola system I'll talk about in a minute.

The lemons here as well as the limoncello are IGP products - Protected Geographic Indication like AOC or DOC.  The IGP are includes both Sorrento and Capri. Here are some of the IGP Limone di Sorrento laws I was able to pick up:

The name for the lemons of the region is Ovale de Sorrento. The fruits take about one year to grow, though the tree flowers 3-4 times annually and they harvest fruit several times as well. The soil is volcanic and helps produce less acidic lemons than in other areas, but these lemons require special care to thrive in this region at all. We visited a lemon grove called Il Giardino di Vigliano.

*Note that somehow I destroyed all my pictures from this trip, so these photos come from Stephanie Fray of Conundrum Marketing. 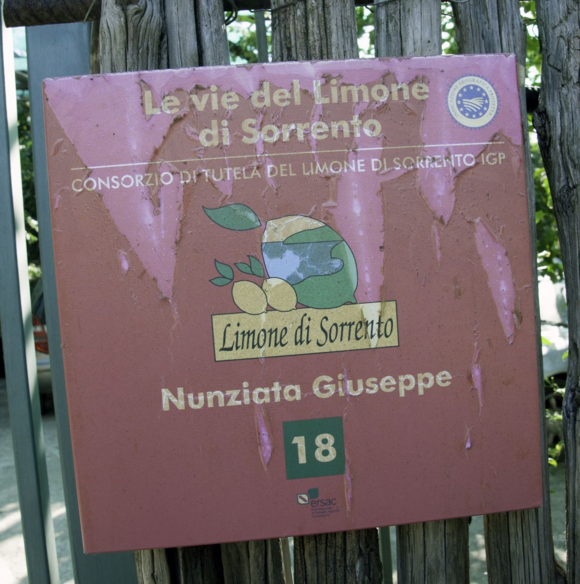 The lemon trees/branches are grafted onto wild orange tree rootstock. Those roots are bigger and hardier and live longer (200 years) than typical lemon trees, so they extend the life of the lemon trees.

Some of the trees have wild orange roots and base of the trunk, followed by a grafted regular (not wild) orange trunk, and then lemon branches grafted onto that (like some sort of citrus turduckin). They can only graft during April and May, and have only a 60-70% success rate in grafting, so this is not easy to accomplish. 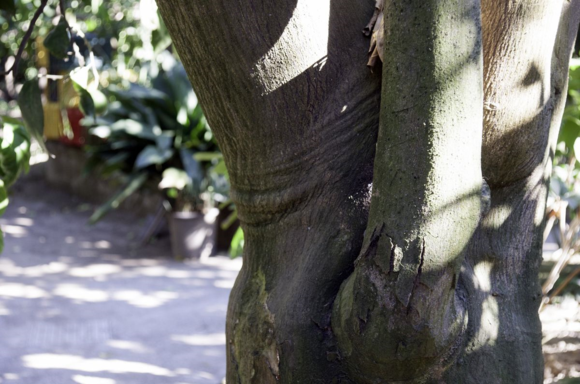 In the winter, the region cools down and gets windy, so they use the pergola system to protect the trees. Chestnut wood pieces make an awning structure over the top of the trees, and in the winter nylon netting or pagliarelle is spread across the top.

Pagliarelle (which sounds like "pie-a-rella") is just an old covering made from small wood slats. Both these coverings keep the temperature more stable in the cold months. In the photo below, the little houses actually hold the wooden slats which can be spread out over the pergola. 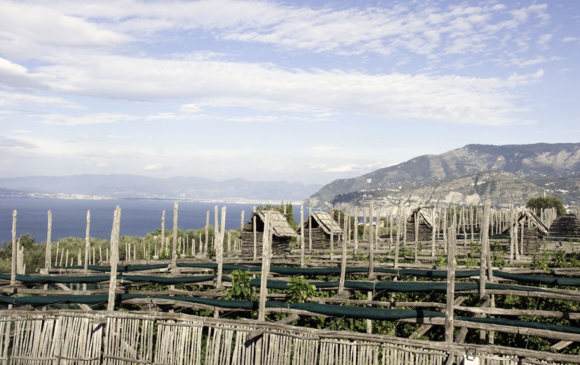 I previously visited another limoncello facility south of this area along the Amalfi Coast, and was surprised to see how different the lemons are grown while not being very far apart. Read about my visit with Pallini Limoncello here.

Those lemons are of the variety sfusato. The trees grow on terraced cliffs and the branches are supported by a pergola. (In Sorrento the pergola just holds up the roof.) Those lemons also grow faster and larger, have less essential oil in their peels, and are more acidic, according to my hosts.

Limoncello di Capri purchases from about 30 different growers. They do not own the orchards but they employ 2 people whose job is to check on the quality of the lemons from the trees through the bottling process.

This is all tracked, so that the company could look at a bottle's serial number and tell you where the lemons came from used in it.

The lemons are hand-harvested and transported to the processing facility. Then they are soaked, then sprayed and brushed/polished.

Next they go into the peeling machine. Eighty Five percent of the lemon - all the fruit part - is discarded as they only want the peel. 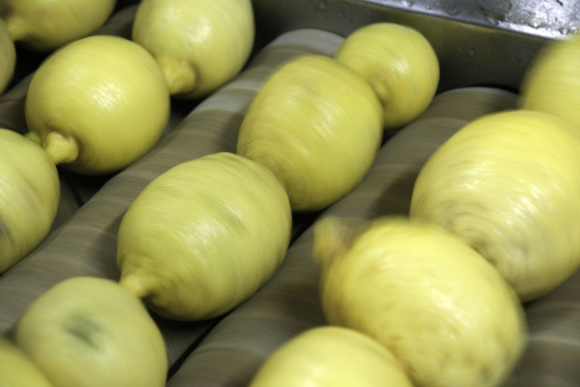 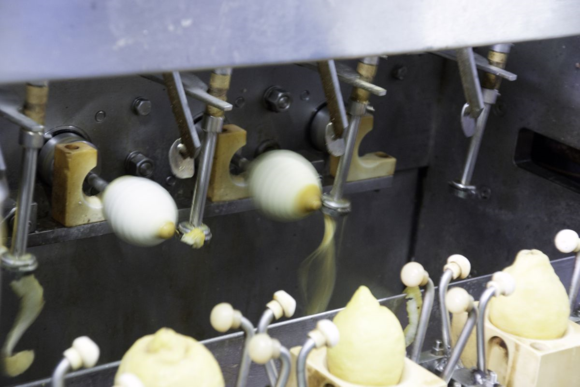 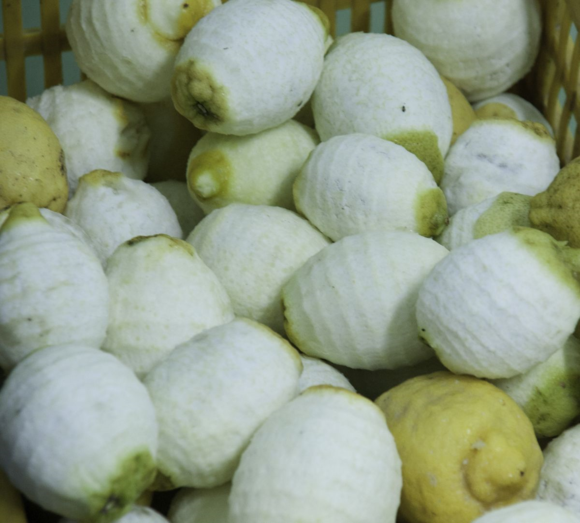 The peelers at this facility are adapted cantaloupe peelers that can peel lemons 4 at a time. Here it is at regular speed:

The peeled lemons are put into plastic bags, vacuum sealed to remove air, and frozen in 6 pound bags. They are frozen because they will be used to make limoncello year-round, while the lemon harvesting is only for part of the year. 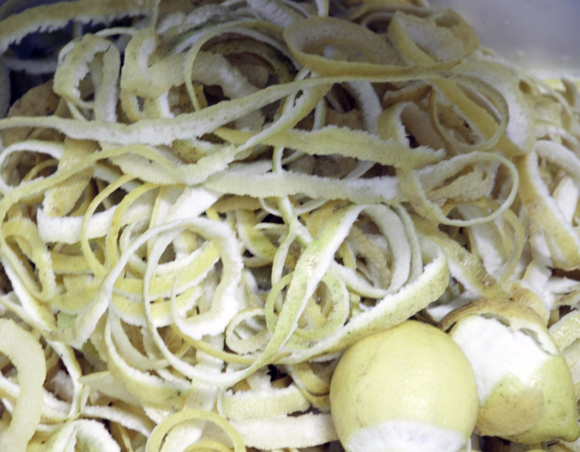 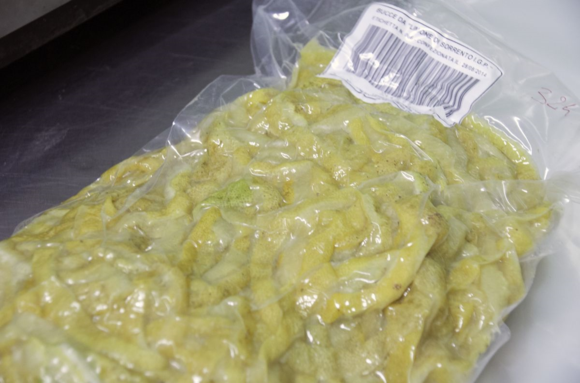 There are IGP laws for  IGP Limone di Sorrento limoncellos, which can be produced in Sorrento and on Capri.

That number is the quantity of whole lemons used. So, since Limoncello di Capri uses 15% of the lemon (the peel), that means there are 330 x .15 = 49.5 grams per liter of lemon peels used.

Life Gives You Too Many Lemons

With 85% of each lemon discarded, I asked about any recycling/reuse. They said that some lemons are in fact juiced. Some of the lemons are composted, some are disposed of as industrial waste, and the city uses some as a disinfectant in its water treatment program.

Assembling the Limoncello on the Island of Capri

Capri is an island a short ferry ride from the town of Sorrento. It is full of windy roads and tall cliffs, which means there are great views from nearly everywhere on the island.

If I understood correctly, not only is Limoncello di Capri the only commercial limoncello made on the island, it is the only production facility of any kind on the island.

It was also the first brand to use and trademark the name "limoncello" meaning "little lemon", but plenty of other people used the term. The Italian Supreme Court ruled that limoncello was a generic name in 2002, so they got a bit stiffed on that one.

The lemon peels are removed from their vacuum-sealed bags and added to 2000 liter tanks of 96% ABV grain alcohol. The lemon peels are infused for 5 days in the alcohol, and by the end the mixture is down to 87% ABV. They use lemon peels collected at different parts of the season to control for natural variation.

The lemon peels are then filtered out and sugar and water is added. The final sugar content is 240 grams per liter. 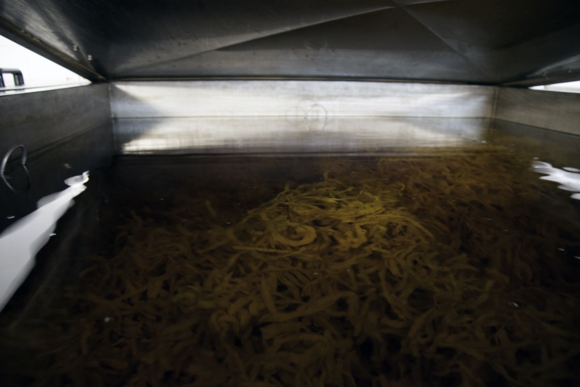 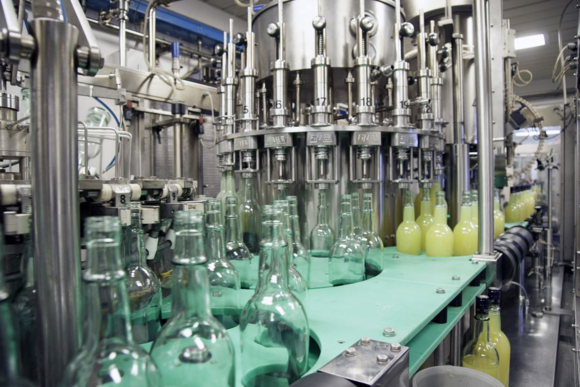 They bottle the product at 32 percent alcohol, which they say is slightly higher than other brands because the product is all natural and more alcohol is needed as a preservative. (They also say that only 20% of limoncellos are made with only lemons- the rest have flavorings and colorings.)

The bottled limoncello is then shipped out. They bottle on the island in the mornings and ship out the limoncello in the afternoons. Because the island only has small roads, their van can only take one palette of limoncello at a time. The driver loads up 7 palettes per day.

In bad weather, they can't get supplies in or limoncello off the island, so production goes on hold.

They produce 800,000 bottles per year at this tiny facility.

A Model of Inefficiency

It doesn't take an efficiency expert to see that this is a crazy system: Bottles, alcohol, sugar , and lemon peels are shipped over from the mainland, mixed together, then sent back to the mainland. It would make a lot more sense to do this all on the mainland, but they're sticking with the brand's heritage and producing on the island.

The brand history dates back to the 1800s, when hotel owner  Vincenza Canale would prepare the drink for hotel guests. There were traditions of making homemade lemon liqueur but according to the brand nobody thought to commercialize it until much later. (As far as I can tell, commercial limoncello  only began in the 1980s.)

The brand Limoncello di Capri was not launched until 1988 by the descendants of Vincenza.

We visited the little hotel where the brand was founded, Casa Mariantonia, which was apparently only the second hotel built on the island. There is still a lemon grove in the yard, where we had drinks.

I think of bottles of spirits with strong regional connections as postcards of flavor. Limoncello di Capri will always remind me of the sunny island where it's made. 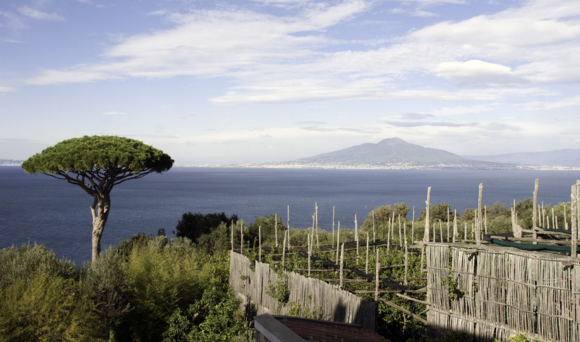 Camper,
What a stunning and interesting article. So many limoncello's are artificial and this is one of the best "real" one's I have tasted. I cannot begin to tell you the memories this brought back. I am so surprised at how low priced this is, I immediately ordered a bottle of this and am looking forward to its arrival. I had no idea of the effort that goes into this particular brand. Thank you so much.
Kind regards, David.