Armagnac Dartigalongue also claims to be the oldest brand of armagnac in Bas Armagnac as does their nearby neighbor Casterede. They're a rather large brand, exporting about 60% of the 50,000 bottles they produce annually. They also make the brand Croix De Salles. 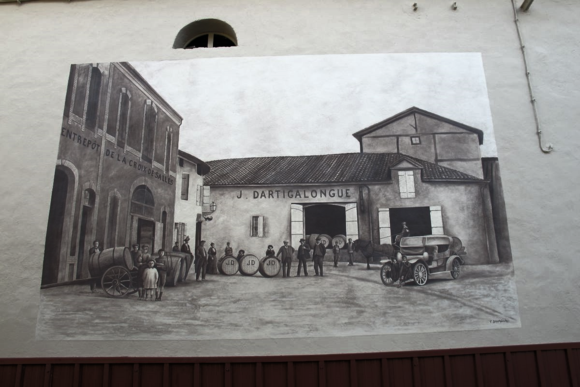 Dartigalongue does not own their own vineyards nor distill their own brandy, but has long-term contracts with their four winegrowers in Bas Armagnac and their distillers. They use the famous mobile distillers, which I assume distill on site at the wineries rather than here where where it's all about aging.

Of the big four grape varietals (baco, ugni blanc, folle blanche, and colombard) they only don't use the last one.

Their wine is distilled by the roving distillers to 60% ABV.

They typically use only barrels made of local Gascony oak but now are experimenting with several other barrels - we saw a small part of the warehouse with the same eau de vie aging in four different barrels as a test. They are also testing steam-assembled barrels, which I believe is the faster, more modern way to bend barrel staves in bigger cooperages.

In armagnac, producers typically reduce with water and aerate the aging brandy on a regular basis, and everyplace seems to do it a little bit differently. Here at Dartigalongue, every two years they aerate the brandy for half a day and reduce it by 2% ABV for the first 10 years. They say this created the special taste of that brand. After ten years, they only reduce the armagnac every 5-7 years or so.

Our host Benoît Hillion said that if they didn't aerate armagnac, it would be tougher and less ethereal, less open, more aggressive, and have a shorter finish. 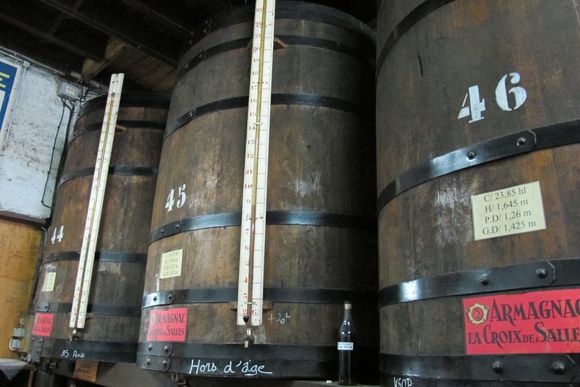 The Dartigalongue house is at street level at the edge of a small old town, and as it typical in armagnac that house is stuffed full of flammable liquid: We walked upstairs from the office to find their dry cellar, then down into the basement to find their cool, humid cellar.

Hillion described the house style as "aromatic but not without agressivity; spicenss of course, and a long aftertaste." I often found the house style to be spicy-minty and not as green and mushroomy as other armagnacs. The 1975 vintage I thought tasted of tarragon, while a 1955 vintage was creamy, sandy, and spicy.

After the tasting we walked across the street to another small building we own. Downstairs was a museum of sorts, with lots of vintage armagnac paraphernalia including racy/misogynist menu ads from long ago, and cruise ship wine lists and very old demijohns of armagnac upstairs. 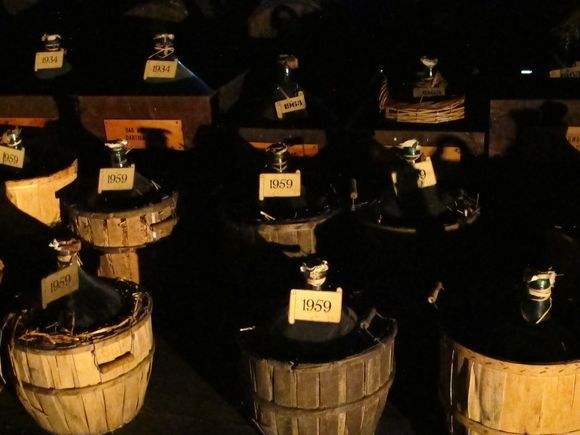 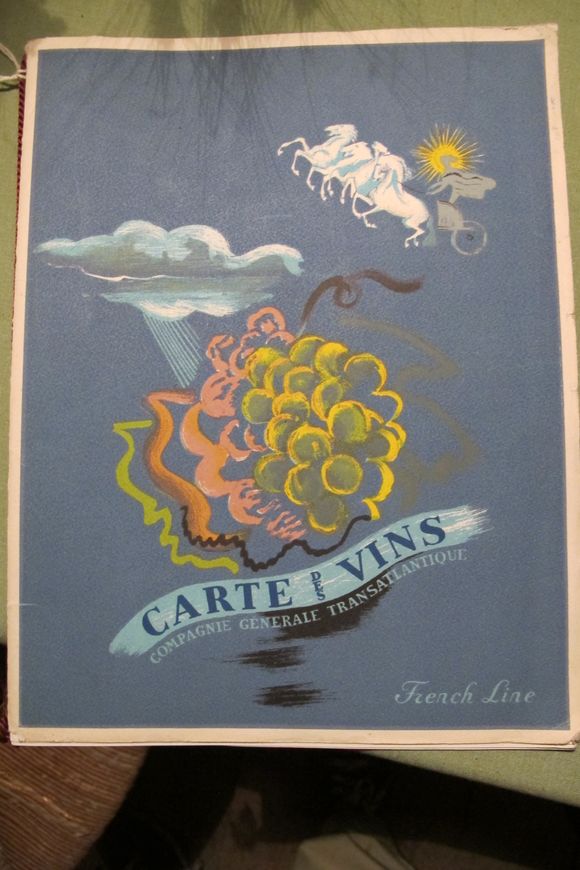 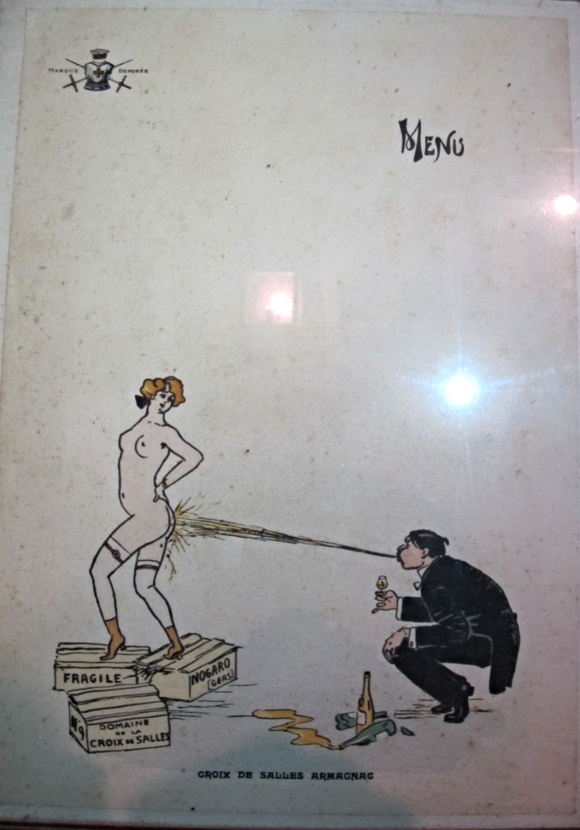 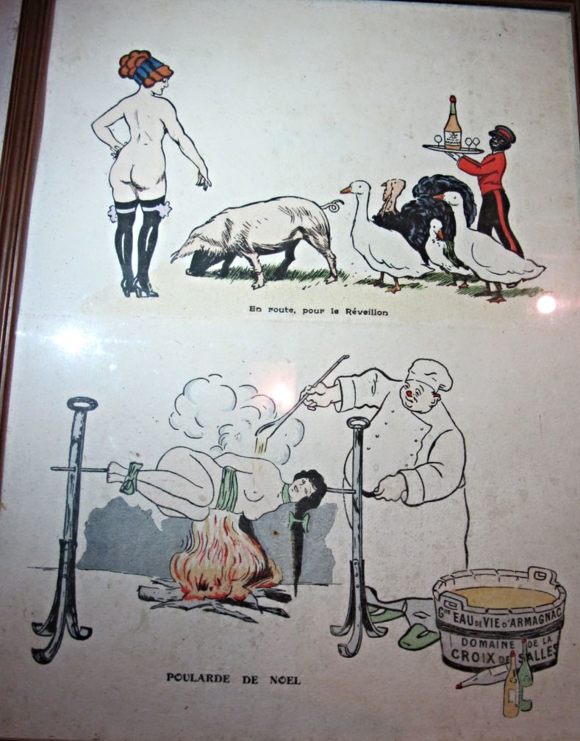 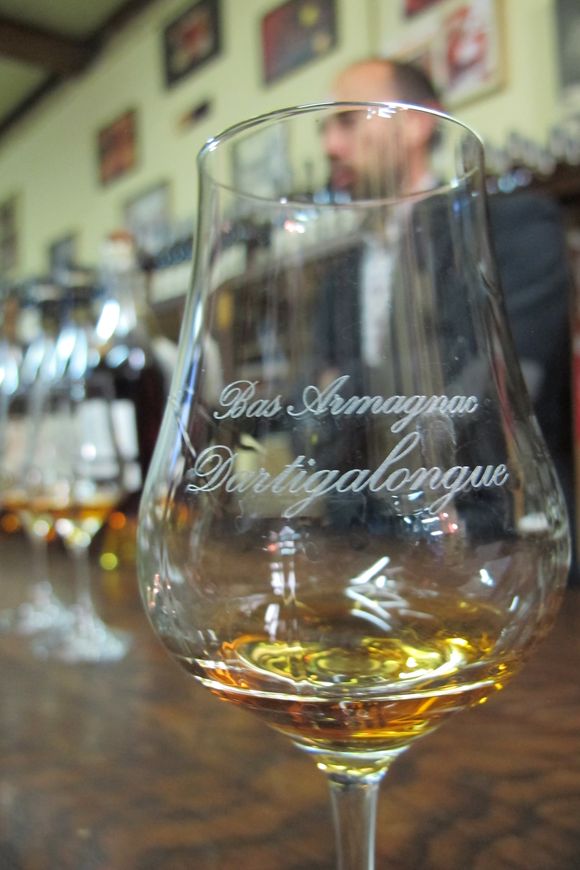