Here are a whole bunch of new drinking books already on shelves or available for pre-order online.  Note that book descriptions come from the publishers.

The Field Guide to Drinking in America
By Niki Ganong 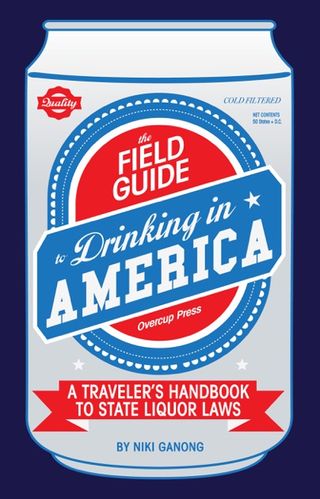 The Field Guide to Drinking in America (Overcup Press, April 21, 2015) mixes together a survey of each state's history with alcohol along with the current laws of the land, expertly blending it with the right amount of humor and sass.

Organized in a state-by-state regional format, The Field Guide keeps thirsty travelers informed when they cross state lines as they consider the complexity and variety of state laws enacted since the repeal of Prohibition.
Author Niki Ganong is a food and drink writer from Portland, Oregon.

Imbibe! From Absinthe Cocktail to Whiskey Smash, a Salute in Stories and Drinks to “Professor” Jerry Thomas, Pioneer of the American Bar (Updated and Revised Edition)
By David Wondrich 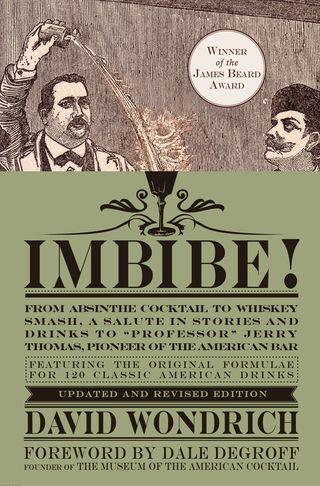 (Perigee/Penguin Random House; April 7, 2015) is David Wondrich’s return and final chapter in the story of Jerry Thomas, a nineteenth-century cocktail pioneer. The first edition of the book won a James Beard award in 2007, and this follow-up is expanded and heavily revised, with a mass of new biographical material on Jerry Thomas and his bartending contemporaries; a more detailed discussion of spirits; new histories for many of the existing drinks; and over twenty new drinks.

Imbibe! combines a biography of Jerry Thomas, the first person to write a bartender’s guide, with a history of the early days of American bartending, histories of Thomas’s drinks, and other famous drinks of his age—including the original Cocktail, the Manhattan, the Martini and various Sours, Fizzes, Punches, Flips, Noggs, and so on. Imbibe! was one of the volumes that helped kick the modern cocktail revolution into overdrive. This new revision reflects the impact of that revolution, and remains the definitive guide to pre-Prohibition bartending and drinking.

David Wondrich is widely hailed as one of the world’s foremost authorities on the history of the cocktail and one of the founders of the modern craft cocktail movement. Imbibe! was the first cocktail book to win a James Beard award.

Shaking Up Prohibition in New Orleans: Authentic Vintage Cocktails from A to Z
By Olive Leonhardt and Hilda Phelps Hammond In the 1920s Prohibition was the law, but ignoring it was the norm, especially in New Orleans. While popular writers such as F. Scott Fitzgerald invented partygoers who danced from one cocktail to the next, real denizens of the French Quarter imbibed their way across the city. Bringing to life the fiction of flappers with tastes beyond bathtub gin, Shaking Up Prohibition in New Orleans: Authentic Vintage Cocktails from A to Z serves up recipes from the era of the speakeasy.

Originally assembled by Olive Leonhardt and Hilda Phelps Hammond around 1929, this compendium applauds the city’s irrepressible love for cocktails in the format of a classic alphabet book. Leonhardt, a noted artist, illustrated each letter of the alphabet, while Hammond provided cocktail recipes alongside tongue-in-cheek poems that jab at the dubious scenario of a “dry” New Orleans. A cultural snapshot of the Crescent City’s resistance to Prohibition, this satirical, richly illustrated book brings to life the spirit and spirits of a jazz city in the Jazz Age. With an introduction on Prohibition-era New Orleans by historian John Magill and biographical profiles of Leonhardt and Hammond by editor Gay Leonhardt, readers can fully appreciate the setting and the personalities behind this vintage cocktail guide with a Big Easy bent.

The Negroni: Drinking to La Dolce Vita, with Recipes & Lore
By Gary Regan 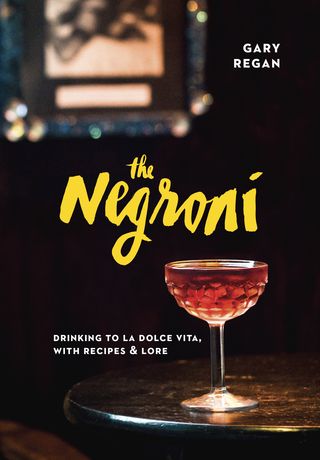 A history of one of the world's most iconic cocktails--originally an Italian aperitivo, but now a staple of craft bar programs everywhere--with 60 recipes for variations and contemporary updates. The Negroni is one of the simplest and most elegant drink formulas around: combine one part gin, one part sweet vermouth, and one part Campari, then stir and serve over ice.
This bitter, sweet, and smooth drink has inspired countless variations as well as legions of diehard aficionados. In The Negroni, Gary Regan--barman extraordinaire and author of the iconic book The Joy of Mixology--delves into the drink's fun, fascinating history (its origin story is still debated, with battling Italian noblemen laying claim) and provides techniques for modern updates (barrel aging and carbonation among them). Sixty delightfully varied and uniformly tasty recipes round out this spirited collection, which is a must-have for any true cocktail enthusiast. 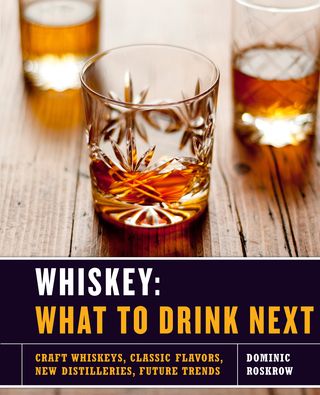 As the popularity of whiskey grows, more and more connoisseurs seek to unlock its mysteries and better understand its myriad styles and tastes. This new whiskey audience, as well as the aficionados, seek quality, variety, and a heritage worth savoring. Carefully researched and with a unique format, Whiskey: What to Drink Next takes a systematic, easy-to-understand approach to selecting new brands to please your palate.
It covers everything from single malts and bourbons to ryes and blends, from traditional Scotches to whiskies from such diverse locales as Sweden, India, and Texas. Organized by country of origin, each type of whiskey has a guide to its specific heritage and production; three recommended whiskies to try at different prices; and a colorful, graphic “atomic diagram” with cool facts, lists of distilleries, and tasting notes. A “periodic table” helps you decide which whiskeys to try next. Whiskey expert Dominic Roskrow gives enthusiasts a treasure trove of unbiased information about the ever-evolving world of whiskey-organized in a fun, new, graphic way.
Cocktails on Tap: The Art of Mixing Spirits and Beer
By Jacob Grier 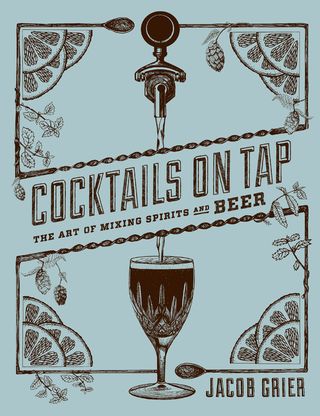 Cocktails on Tap brings together two major trends—craft cocktails and craft beer—with more than 50 recipes for mixed drinks that feature beer. Beer has become a favorite ingredient for top bartenders around the world, and this book features the best of these contemporary creations alongside vintage classics. Drinks such as the Mai Ta-IPA put a hoppy twist on a favorite tiki cocktail with the addition of India Pale Ale. The Green Devil boosts the powerful Belgian beer Duvel with juniper-forward London Dry gin and a rinse of aromatic absinthe. In Cocktails on Tap, the vast range of today’s beers—from basic lagers to roasty stouts and sour Belgian ales—is explored and tapped as a resource for making an innovative and delicious array of cocktails.
Jacob Grier is a professional bartender based in Portland, Oregon, the host of a series of events called Brewing Up Cocktails, and a consultant for several spirit brands. His recipes have been featured in the Wall Street Journal, Imbibe, Los Angeles Times Magazine, and more.
Summer Cocktails: Margaritas, Mint Juleps, Punches, Party Snacks, and More
By Maria del Mar Sacasa 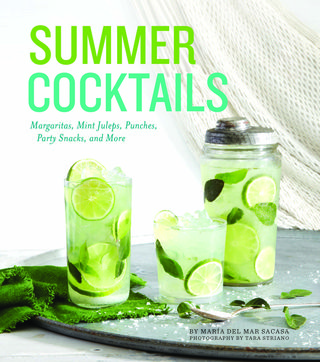 Whether you’re lounging by the pool, cooking over a grill, or relaxing in the hammock, you need a great drink. And with Summer Cocktails, MarТa del Mar Sacasa and Tara Striano will help you discover your favorite fair-weather friends, from Peachy Keen Punch to Ginger-Lemongrass Piña Colada. Summer Cocktails features more than 100 seasonal recipes for punches and pitchers, frosty drinks, classics and throwbacks, and more. Craft your beverages from the bottom up with underpinnings straight from your summer garden, including Strawberry-Rosemary Shrub, Rhubarb Syrup, or Tomatillo and Coriander Tequila. Plus, round out the perfect party with savory snacks to match your cool drinks.
A graduate of the International Culinary Center (formerly French Culinary Institute), María del Mar Sacasa is a food stylist, writer, and consultant who has worked for Lucky, Vogue, and America’s Test Kitchen. Her styling work has appeared in print publications, TV commercials, product packaging, and cookbooks. She lives in New York City and Los Angeles.

Fika: The Art of the Swedish Coffee Break with Recipes for Pastries, Breads, and other Treats
By Anna Brones and Johanna Kindvall This illustrated lifestyle cookbook educates on the Swedish tradition of fika—a daily coffee break—including recipes for traditional baked goods, and anecdotes about Swedish coffee culture from the roots to modern incarnations of this cherished custom. Anna Brones and Johanna Kindvall share more than 45 classic recipes from their motherland—from cinnamon buns and ginger snaps to rhubarb cordial and rye bread—while also examining what fika means to Swedes and how we can all integrate its values into our daily lives.
Sweden is one of the world's top coffee consuming nations, and the social coffee break known as fika is a cultural institution. A time to take a rest from work and chat with friends or colleagues over a cup and a sweet treat, fika is part of the national identity and a marker of the Swedish ideal of taking time to appreciate life's small joys.
Anna Brones is a Swedish-American freelance writer based in Paris. Johanna Kindvall is a Swedish Illustrator who divides her time between Brooklyn and southern Sweden.