Cocktails of the Wholesaler Iron Mixologist Competition at WSWA

Last month I helped judge the wholesaler Iron Mixologist competition at the Wine and Spirits Wholesalers of America Convention in Orlando. This is a competition for the mixologists who work for distributors (as opposed to at a bar, though some also work in bars) developing cocktails with their portfolio of products. 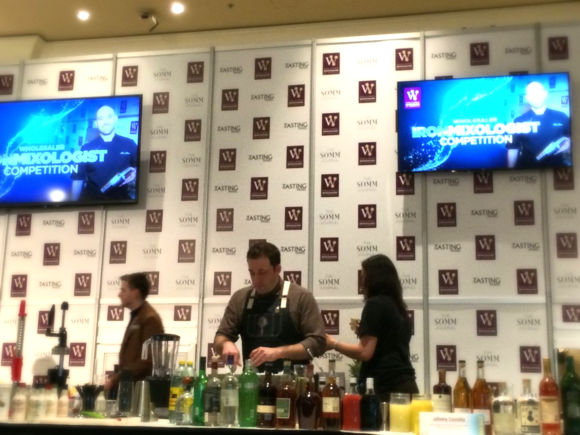 Typically these mixologists are not in the business of developing super complicated cocktails, because let's face it, if a bar needs help from their distributor coming up with cocktails it's probably not among the elite cocktail bars on America.

I also judged this competition four years ago and my what a difference a few years has made! Last time the average drink was pretty, um, bad, but there were a few stand-outs. This time, like in most cocktail competitions I judge, nearly all the drinks were delicious, nuanced, and creative; and it was just a matter of picking the best of the best. 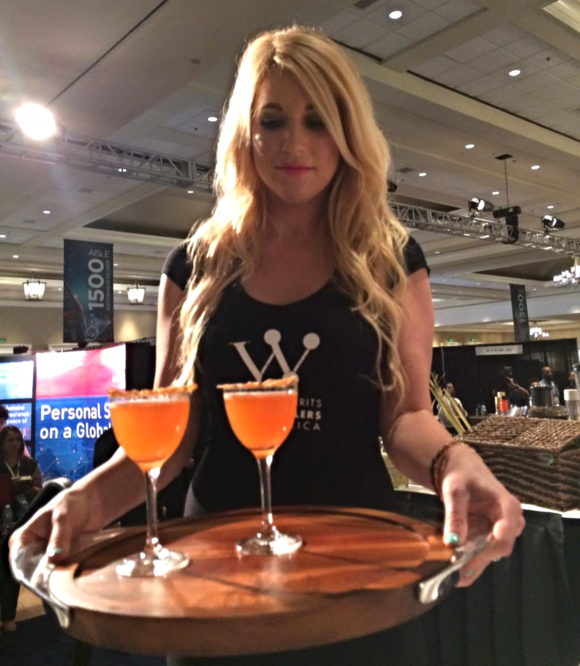 The bartenders had to make two cocktails, each containing some of the secret ingredients: Prickly pear in one drink and herbs from a pre-determined selection in both cocktails. One drink had to be an aperitif-style cocktail (low in alcohol, not sweet), and the other a long drink (served on ice).

Four years ago the winner was Caterina Miltenberger, the Corporate Mixologist for Glazer's Distributors out of Dallas. This time, she also won Best Long Drink. Her cocktail had coconut rum, coconut water, rose liqueur, rye whiskey, prickly pear, lime juice, and basil. It was then carbonated and served over ice. 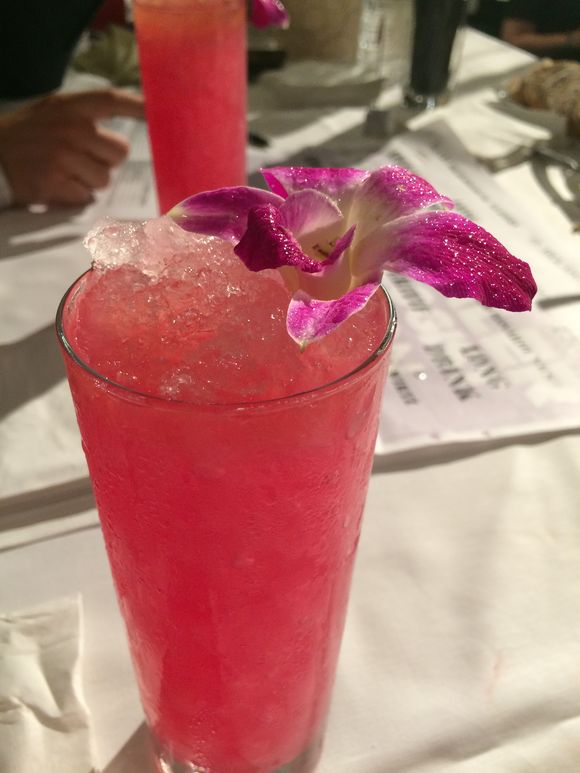 The winner of Best Aperitif and the overall Best In Show was Nick Nistico, Beverage Program Development Specialist at Premier Beverage/Charmer Sunbelt Group out of Miami.

His aperitif drink contained fino sherry, celery, prosecco, and sage, and was garnished with a prickly pear slice. The whole thing was served in an iced bucket with prosecco on the side, like fancy bottle service. It was delicious and his serve was pretty lovely. 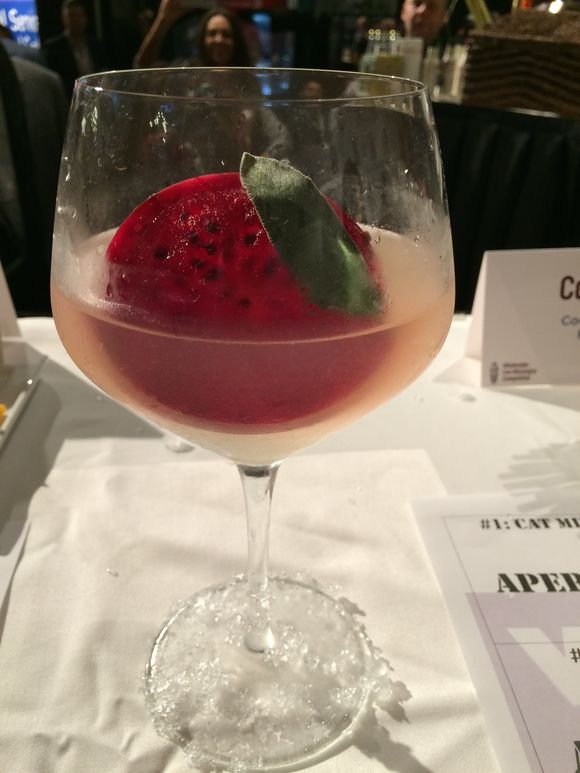 Nistico also performed well in the long drink category, in which he served a drink in a pineapple with Angostura-soaked dehydrated orange slice, an orange zest, straws, an umbrella, a mini bottle of Angostura bitters, and a pineapple leaf. Laying it on thick. 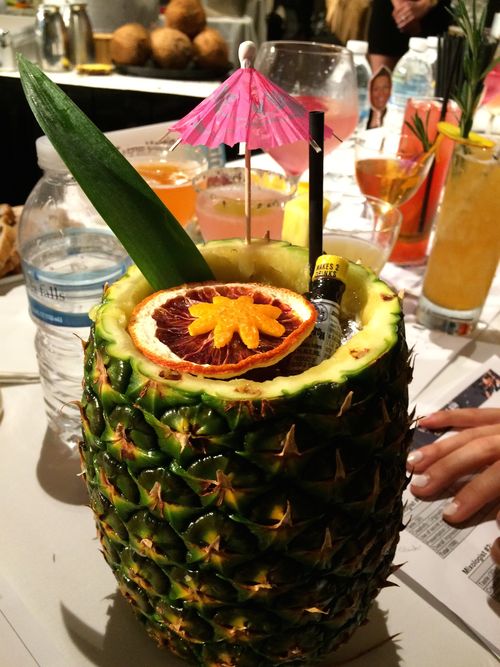 Armando Rosario's drink was incredibly impressive: it was 3 Cairpirinhas in one tall glass, separated by lime slices. So you could drink each one individually or mix them up. 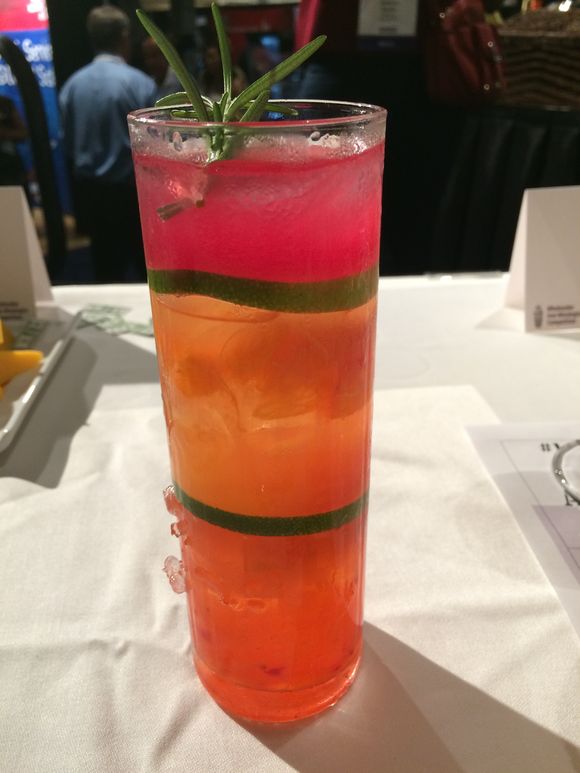 But my favorite garnish of the competition was this one, with a prickly pear slice beet's circle contrasting with the linear divisions of the paper sugar cane straw. I don't remember who did this drink. 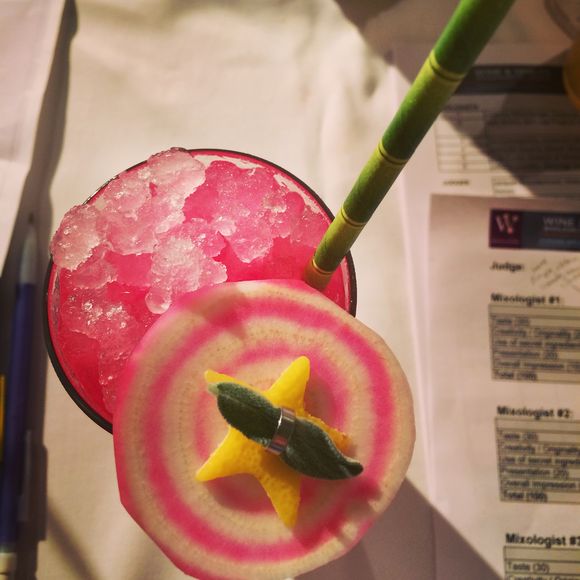 Below are a few more pics from the competition. A lot of winners there.

You can find the recipes for the winning cocktails here.

Dude that's a beet with the ringd

I fail at vegetable identification.